From our previous post you may remember that we arrived in Grafton late Wednesday afternoon,  after a long ride from Bar Island complicated with the “reported” barge blocking the river. A lot has happened in Grafton and it has been an excellent/fun port !

Wed – Sept 20
After we arrived in Grafton about 5pm Wednesday, we hooked up all the power & water cables and hoses. We turned on the 2 AC systems to cool down the boat from the 95F heat, took a shower, and then went to dinner about 7pm. We ate dinner at the Grafton Harbor Oyster Bar connected to the marina. When we were almost done with dinner, all of the lights in marina went out including the lights in the restaurant. I said to Jonell “Oh-boy, I feel sorry for the joker that caused that”. After about 5 minutes the power came back on and all was good. We paid our bill and returned back to the boat about 8:30pm. When we returned back to the boat there were about 6-7 people gathered around the shore power station of the SS Gettin’ Looped. Evidently while we were cooling down the boat with both AC units on (40 amps) the shore side connector in the Y-splitter was making poor contact and building up heat, ultimately leading to arcing/sparking/and power shutdown . Earlier in the afternoon when we checked in, I had met the Owner/Operator of Grafton Harbor Joe DeSherlia. Joe helped us relocate to a new slip (the shore power connector was toast) & helped with a replacement loaner splitter to reconnect the two 50A shore power cables. When I reviewed the Grafton Harbor splitter vs my splitter with Joe and the marine mechanic Brad, we noticed two things; the diameter of the outer grounding ring on my splitter was a little wider than the loaner splitter & the teeth on my splitter were chamfered, not flat like the loaner splitter. On the chamfered connector teeth you could actually see the arcing marks. The bottom line = old connectors on both the splitter and shore power stations allowed enough gap to allow small arcing which built up heat over time. The remaining question that Joe is trying to get answered is “why did the main marina breaker pop before the local shore power station breaker”.
Recommendation to all my boater friends = after connecting your power cables at every new harbor, run your normal high loads & after an hour or so do a hand check of the connectors at the shore power station and the boat. If something is wrong (gapped connections/corroded connectors) you will feel the heat in the connector. A similar event recently happened to my boating pal Joe Grace in Michigan. 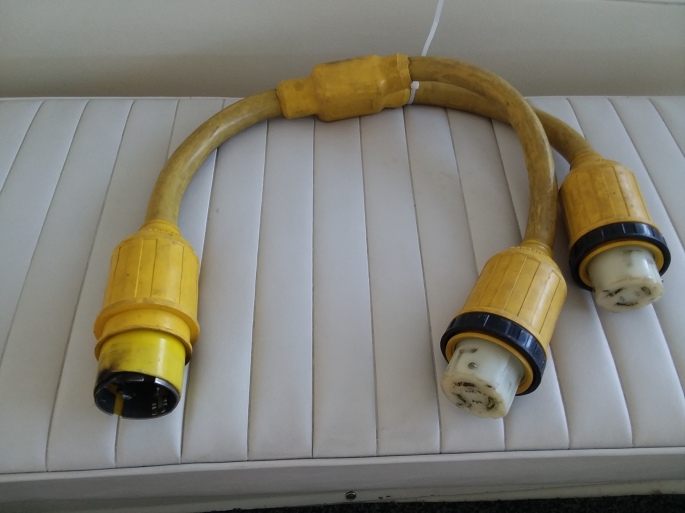 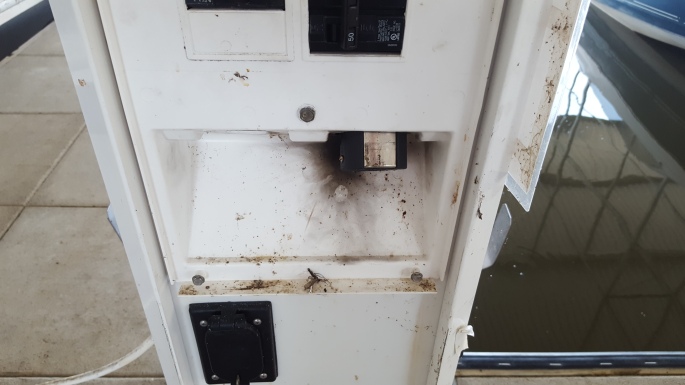 Thu – Sept 21 (Ashley Murphree’s Birthday !)
I started the next day ordering a new splitter from Defender Marine. About $550, but they did have the splitter in stock and 2 day shipping, which would allow us to stay on schedule for the next move on Monday to the Hoppies Barge.

We spent a few hours washing the boat, doing laundry, and Gettin ready for a visit from my nephew Jake Baldwin & 1st mate Mollie.

Jake & Mollie arrived about 6:00pm.
Jake is going to Chiropractic school in St Louis, he is in his sophomore year at Logan University. Jake already received his bachelors degree at Ashland University in Ohio a few years ago (in biology I think ?) . While he was at Ashland, he also was a very good baseball pitcher who won the GLIAC Player of the Year in his sophomore season & almost got drafted by the Oakland A’s before he injured his arm and had to have Tommy John surgery.
Jake’s 1st mate Mollie is a doll, she accompanied Jake to St Louis and works from their apartment for a medical billing service that she originally worked for in Ohio, where Jake & Mollie met.

We had a few drinks on Gettin’ Looped with Jake & Mollie, they had not yet seen the boat because they live in St Louis.
We then went to dinner at the Aeries Winery Terrace, a restaurant on top of the hills of Grafton. The views were spectacular. From one direction you could see the convergence of the Illinois & Mississippi Rivers, and from the other direction you could see down the Mississippi all the way to St Louis. At night we could see the lights from the Gateway Arch. 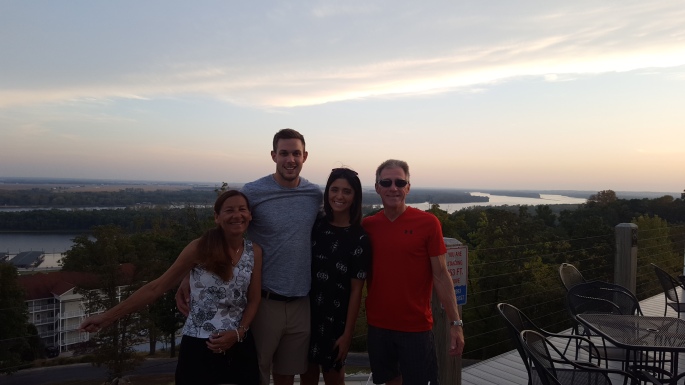 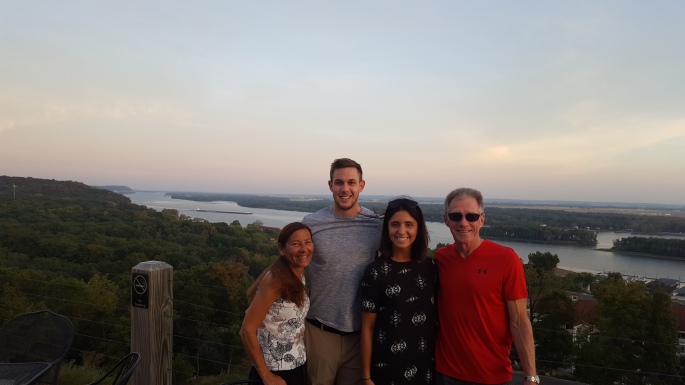 Fri-Sept 22
On Friday we were planning on heading in to St Louis to see the Gateway Arch.

Prior to leaving, I went on-line to check the shipment status of the new splitter before we left and found out that the two-day shipment that I paid $50 for was shipping the new splitter to our home in Royal Oak Michigan, not Grafton Harbor Illinois (Crap ! ).
I initially attempted to have my son Dan go to our house and collect the splitter from the folks renting the house. But Doctor Sauber’s wife had already taken the UPS box to the post office. So the new splitter was now on its way to our mail forwarding service in Florida.
After an hour of phone calls, I called Defender Marine and ordered a 2nd new splitter to be delivered to GRAFTON, and obtained a Return Authorization for the original splitter. Now we just hope the USPS indeed delivers the 1st new splitter to my mail service folks.

Finally we were on our way to St Louis, thanks to a lift from Captain Kenny. Kenny is a boat captain on the local river tour boat, but gave us a lift into St Louis because there is no taxi or Uber service from Grafton to St Louis.

While in St Louis, we visited;  The Gateway Arch, Busch Stadium, Ballpark Village, and The Loop.

The Gateway Arch is a 630-foot monument in St. Louis clad in stainless steel and is the world’s tallest arch, and the tallest man-made monument in the Western Hemisphere.
Construction began in 1961 and completed in 1967.
There was a movie about the construction before you went up in the tram/pod which carries visitors to the Top of the Arch.
The construction was quite the engineering feat.
Construction consisted of the fabrication & assembly of a series of 12 ft tall triangular sections. These stainless steel triangles, which narrowed as they spiraled to the top, were raised into place by a group of cranes and derricks attached to the legs of arch itself. The arch was assembled with 142 / 12-foot-long prefabricated stainless steel sections. Once in place, each section had its double-walled skin filled with concrete, & pre-stressed with 252 tension bars. The north & south legs were built separately, then attached together with the final triangular section in 1967. In order to keep the partially completed north & south legs steady, a scissors truss was placed between them at 530 feet, and later removed as the derricks were taken down and the last section attached the two legs.
The movie was very educational.
It is called the Gateway Arch, because at the time of its original conception in the 1930s, St Louis was the western most city, so it became the gateway to the west. 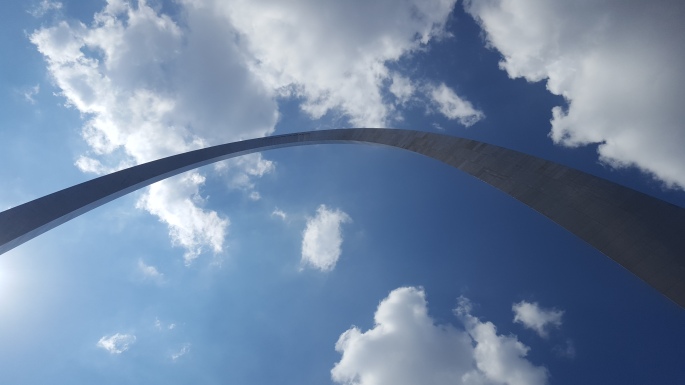 Our next stop was Busch Stadium.
Busch Stadium was pretty cool with a lot of memorabilia of the Cardinal stars of past (Stan Musial,Bob Gibson, Curt Flood – see the statues in front). Recall that the Tigers beat the Cardinals in 1968 to win the World Series after falling down 3 games to 1 (Denny McLain the 31 game winner in 1968 was not the hero. Mickey Lolich won 3 of the 4 games the Tigers won in that series, he typically pitched 300 innings per year). 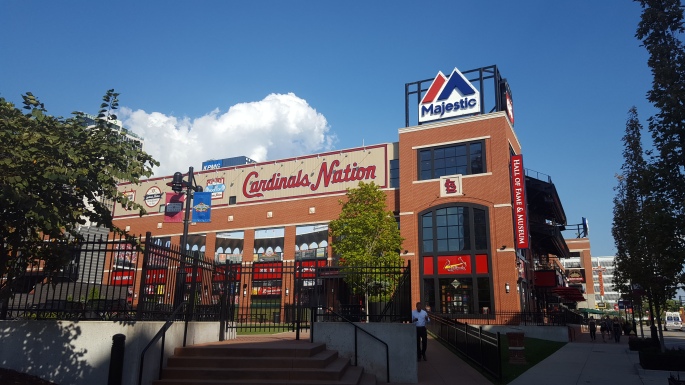 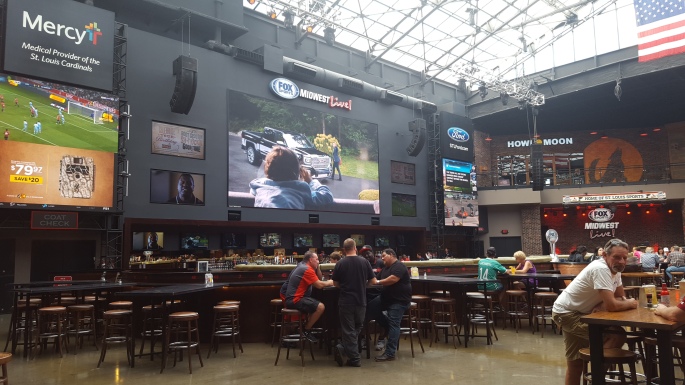 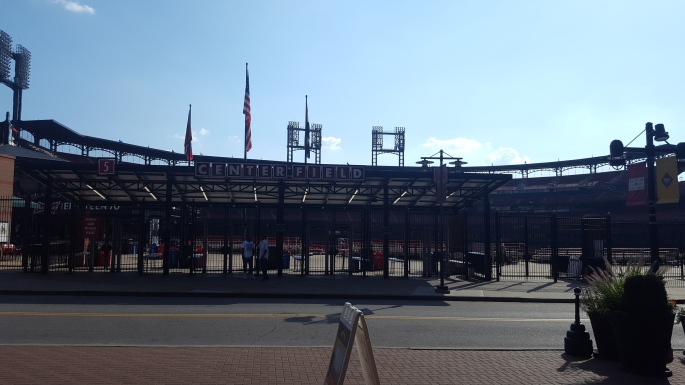 Next stop was “The Loop”
The Loop was billed as a place with a bunch of restaurants/bars and sidewalk placards with famous people born in St Louis.
To get to the Loop we heard from some folks that we could take the Metrolink railcar from the ballpark in downtown St Louis to The Loop in northern St Louis. It was about a 20 min ride and dropped us in a not so great area. We had to walk about 8 blocks to get from the metrolink station to one end of The Loop. Not sure which way to go when we got off the metrolink car, we were escorted by Krishna to the start of The Loop.
The Loop was “OK” and we did see several placards of famous folks, but we were worn out after a hot 95f day of walking in St Louis, and called the Uber car for a ride back to Grafton after having some ice cream on The Loop. 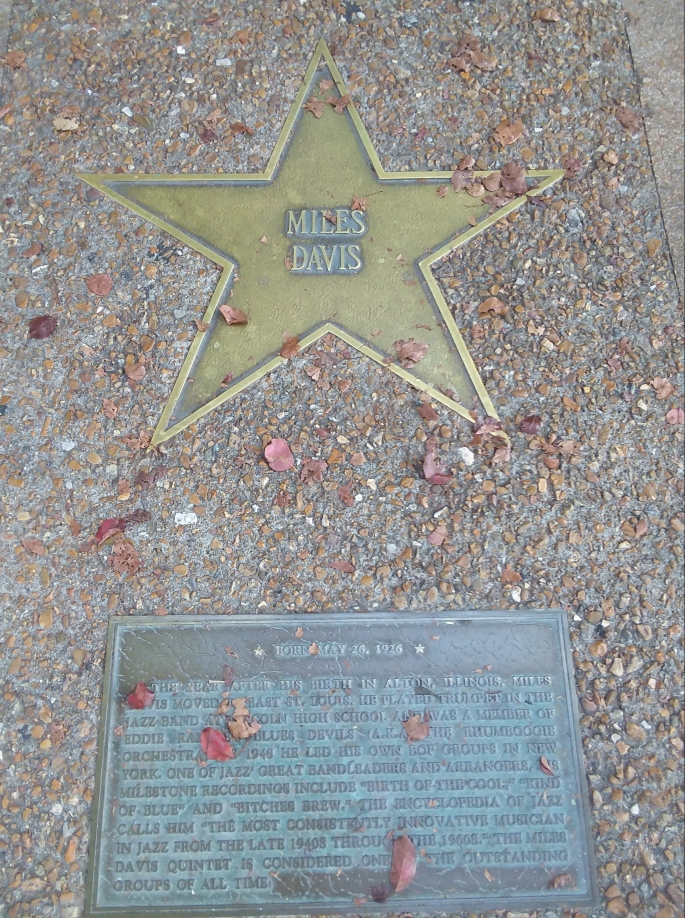 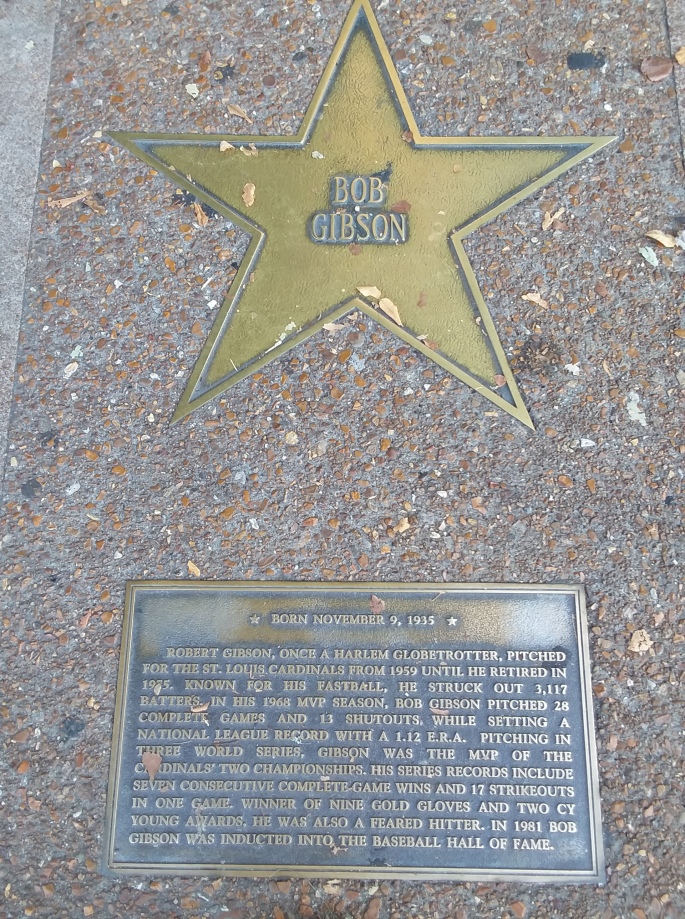 After a siesta back at the Gettin’ Looped, we went out for a dinner which included a Rum/Coke & the Best Bread Pudding I have ever had in my life

We ordered more boat cards, running low already only 2 months into the trip.

We spent a few hours by the Pool with Lab Partners & Firestorm.

We ended the day with dinner at the Grafton Harbor Winery & listened to 2 bands at different bars. The 2nd band played Metallic Hard Rock, and were pretty darn good, even though we are not big hard rock fans. 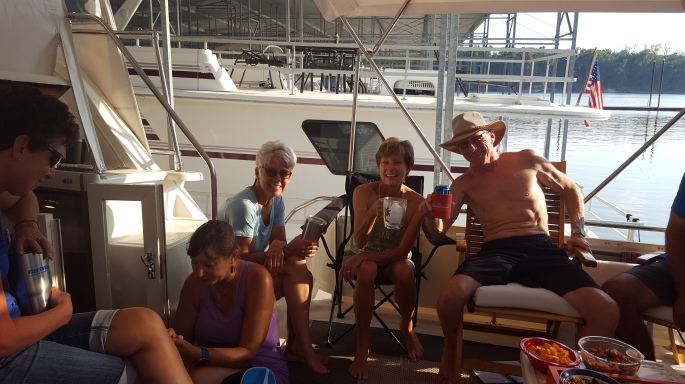 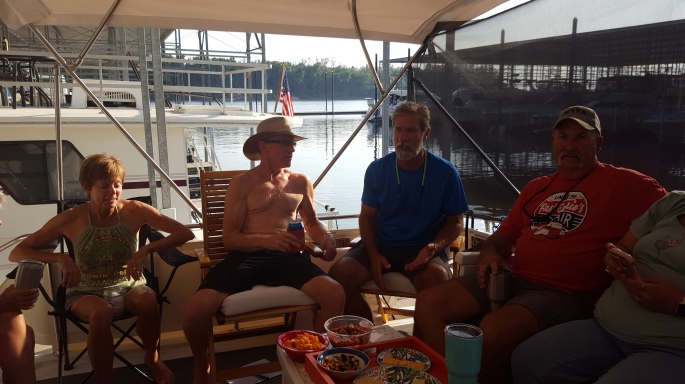 Summary
In spite of the initial power cord issues, the stay at Grafton has been very nice. The assortment of restaurants & bars is very large for such a small town. The owners Joe & Jan are the nicest I have ever encountered. They will do anything you need. Jan has loaned me her ATT phone 4-5 times, Joe was willing to let me take his splitter to keep on schedule and replace it later, Jan hooked us up with Boat Captain & part time shuttle driver Ken for a ride in to St Louis. Everyone at this marina bends over backward to help. And all the locals near our slip treat us like family (Jim, John, and Bill).

Next Week will include a very aggressive schedule with our first real experience on The Old Mississippi !