Dear Blog Followers,
Nothing really significant in this post.
The last few posts have been a little “boring?”
But more interesting stuff will be coming when we get down to the Gulf of Mexico in 7-10 days.

Wed – Nov 1st
We left the Columbus Marina on Wed Nov 1st and anchored in a place called Sumter Recreation Area, then went on to King Fisher Marina in Demopolis on Thursday Nov 2nd.
The ride from Columbus to Sumter on Wednesday was warm but rainy. Nellie was wearing her rain jacket again (she has used it many times) but this time commented that the jacket fits fine, but the hood seems a little large. We may have to make modifications.

The ride down the Tenn-Tom had; some nice homes, some rocky walled cliffs, moss starting to form on the trees, and an interesting superman phone booth on the bank of the river. 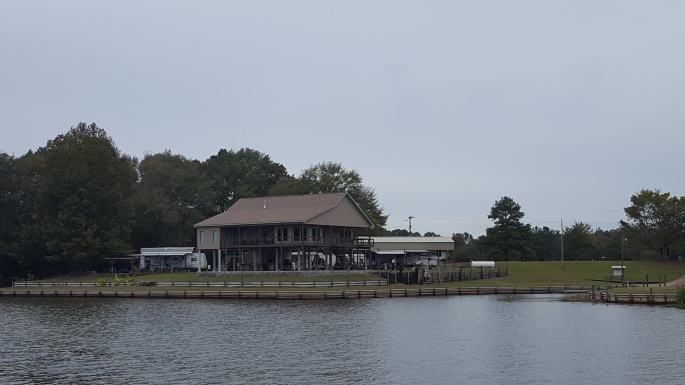 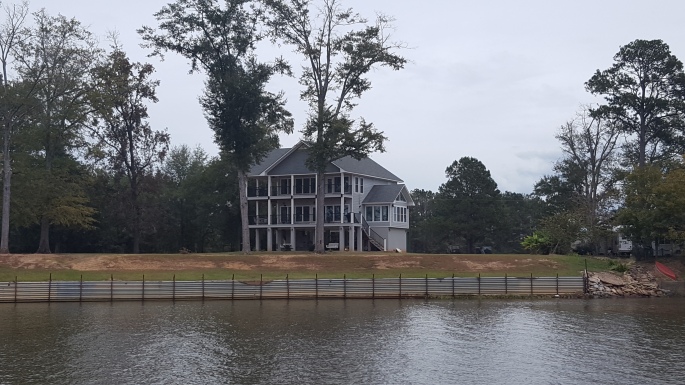 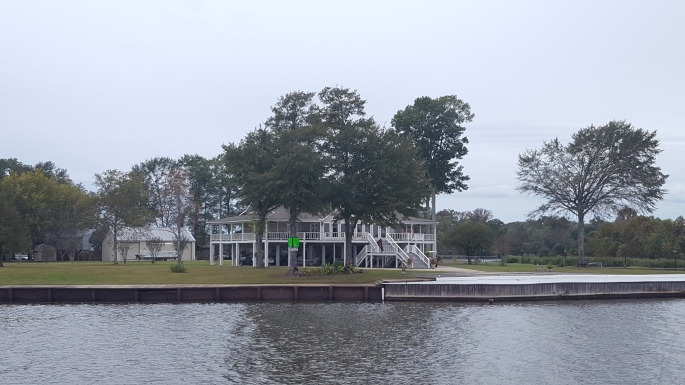 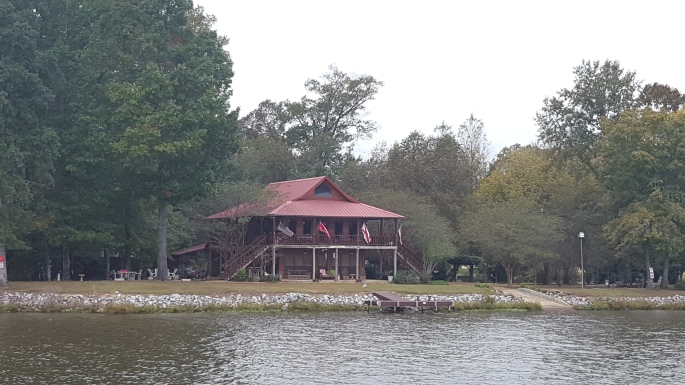 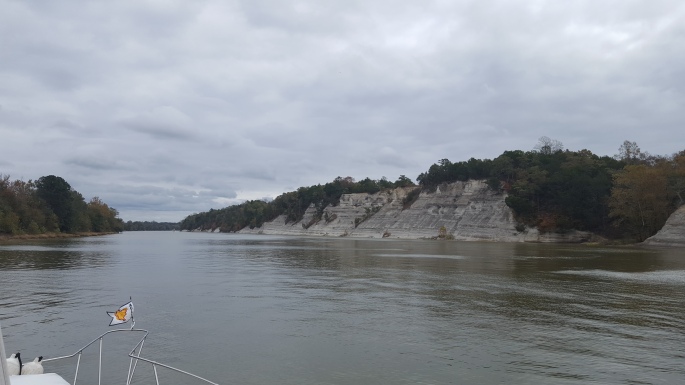 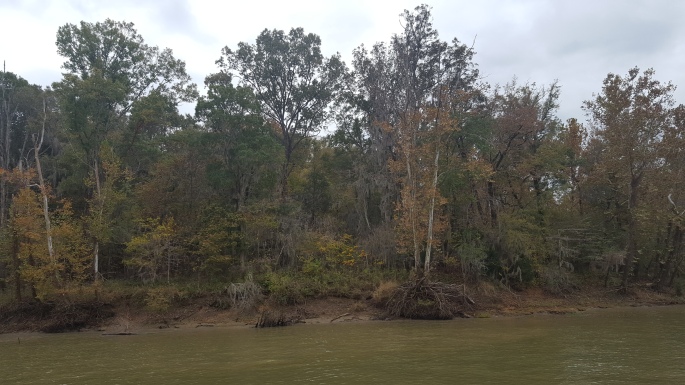 The Sumter anchorage on Wednesday night, was a nice quiet small cove area with only 4 boats in the cove for the night. Gettin’ Looped & our friends Odyssey (Bud/Sue Hanson) rafted together and had popcorn and movie night. Sue is fond of love stories and musicals, so we watched La-La Land. Bud & Mike had a hard time staying awake. 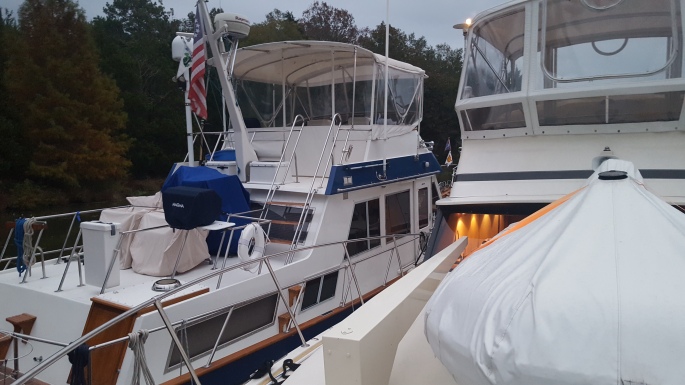 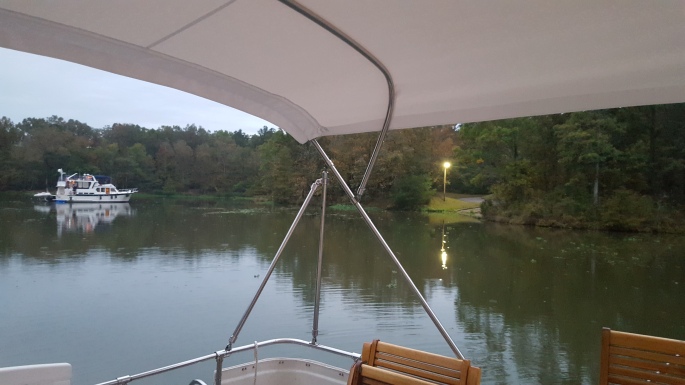 Thursday – Nov 2
On Thursday Nov 2nd we arrived at King Fisher Bay Marina in Demopolis, a 4 star rated marina with an open pool, cable TV, slip side pump outs, fast WiFi, multiple showers, golf carts, courtesy cars, shuttle vans.
Basically all the comforts that the Gettin’ Looped team has gotten’ used to. Some of the previous marinas and upcoming stops will be a little rough until we get to Mobile.

On Thursday night we went to dinner at a place called the Foscue House.
Just west of Demopolis stands the stately remains of what once was a plantation.
The Foscue-Whitfield, or Foscue House as it is commonly known today, has a history that far outlives any business that has used the building as a home.
The Foscue House was built by Augustus Foscue in 1840 with handmade bricks and was used as his family residence. There is a lot of history on the renovations of the property and how/when it became a restaurant, but the big draw was supposed to be that it was an “old haunted plantation house”
The folks at the marina had told us that the Foscue House was known for being haunted by the spirit of an old servant who worked on the plantation years ago. We asked the waitress to provide more of the story, but she did not have a lot of additional details. Google search also did not bring up much.
I think the “haunted plantation house” story is just a big marketing scheme ???
We went to dinner with a new gang of Loopers; Tasteful Traveler (Joe/Pam), Blue Haven (Allen/Lila), and Day Dream (John/??). 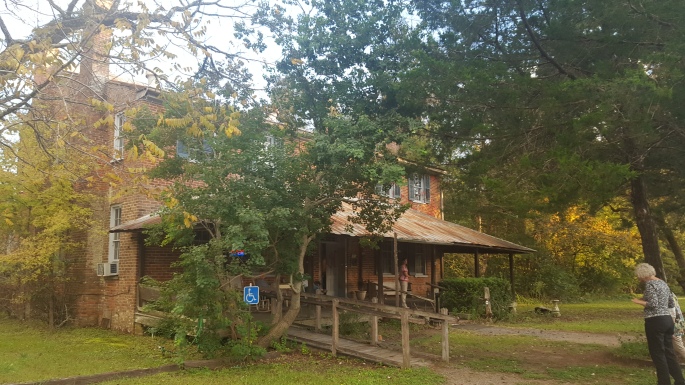 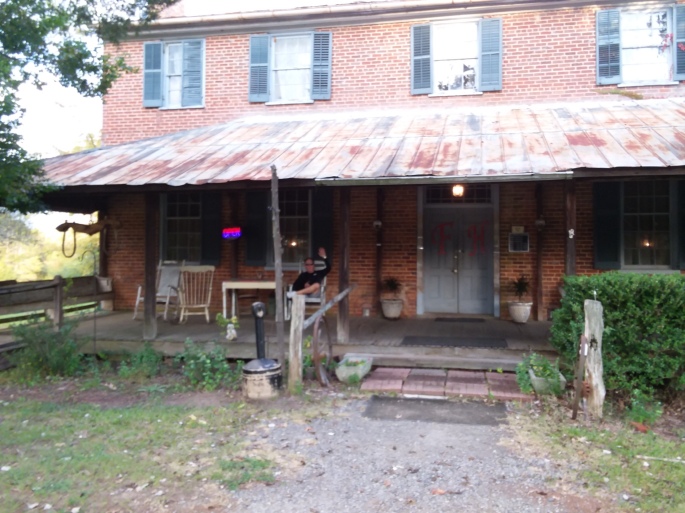 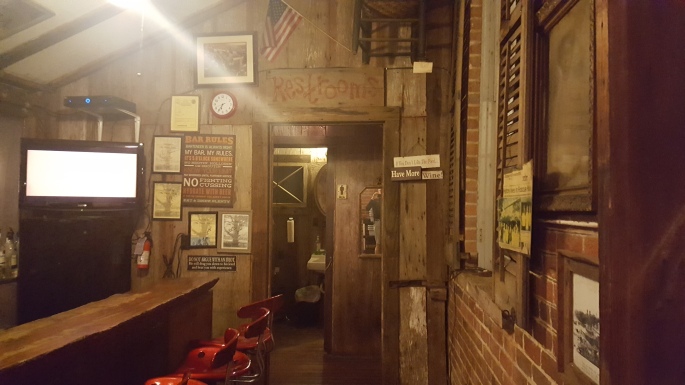 Friday – Nov 3
On Friday;  1) we went grocery shopping with Bud/Sue, 2) topped off the engine oil, 3)washed the boat, 4) pumped out the heads, 5) ordered a new cooling fan for the Ice Maker, 6) paid the second half of the Royal Oak house taxes, 7) re-upped the FCA health insurance for 2018, and 8) went to dinner at a Mexican place with Looper Pals Ramble On (Scott/Linda).
The Las Fuentes restaurant had some very nice sized margaritas.

After dinner we had 10 Loopers over on the aft deck of Gettin’ Looped. It was a wonderful night with no bugs and a full moon. We all used the new bottle of Tiddys delivered by Kenny/Carla to toast the Great Loop, and how thankful we all are to be able to enjoy this great voyage and meeting new friends. We forgot to get a photo of the gang on our boat, but did get a photo of the nice full moon after the folks left.

Saturday – Nov 4th
On Saturday we had a low-key day, spending most of the day at the very nice marina pool (75f & sunny) and watching football (Iowa vs Ohio State – go Hawkeyes).
I was happy to be able to swim some laps again, but am highly out of practice and had to take a little siesta after the swim. 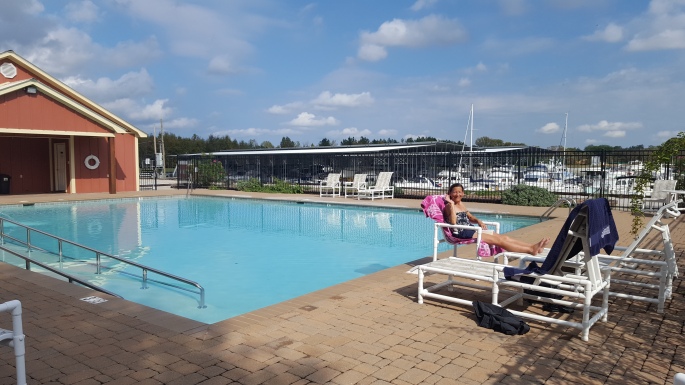 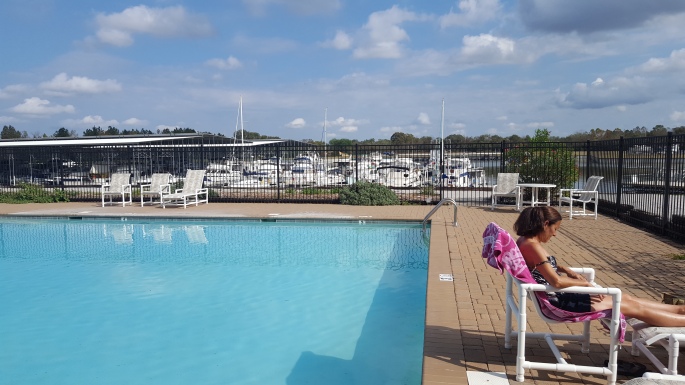 On Saturday night, we went to dinner at The Red Barn with Loopers “Odyssey” & “Ramble On”.
The Red Barn Restaurant, which is located inside of an old rustic barn, is one of the oldest restaurants in the Demopolis area. Before the barn was a restaurant, it was used for several different things, including a hay barn, a John Deere office, and even an antique store.
I had the ribs, Nellie had pork chops, both were very good, & we were stuffed. So much so, that we could not have the signature homemade cobbler topped with ice cream (poor planning). 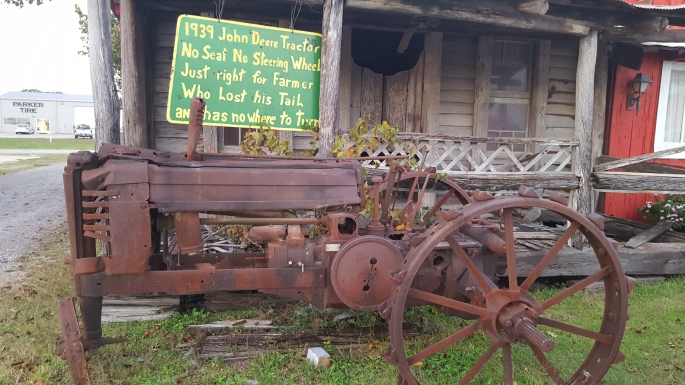 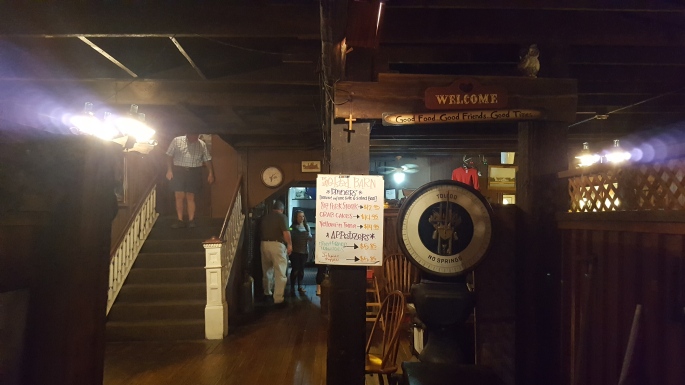 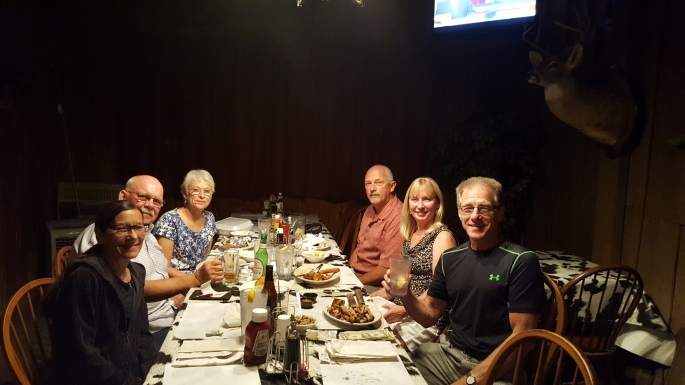 Sunday – Nov 5th
On Sunday, Nellie & I ;
1) Went to Wal-Mart to get a replacement cartridge for my inflatable life vest
2) Visited a Historic House called Bluff Hall
3) We had pizza/beer on Gettin’ Looped with Mark/Sandy Holtsclaw who we had previously met at Pebble Isle Marina in New Johnsonville Tennessee.

Life Vest
Evidently my inflatable life vest went off during the night while it was stored up in the flybridge. Not sure of the cause, but glad it did not go off while I was wearing it, it would have scared the stuff out of me. We went to Wal-Mart attempting to find a replacement cartridge, but were unsuccessful. There were no open marine supply stores in Demopolis today. We will have to complete this project when we get to Mobile in 2-3 days.
We will probably move the life vest storage space to inside the cabin, as the flybridge does get humid after warm days and cold nights, that could have been the cause of the premature deployment. 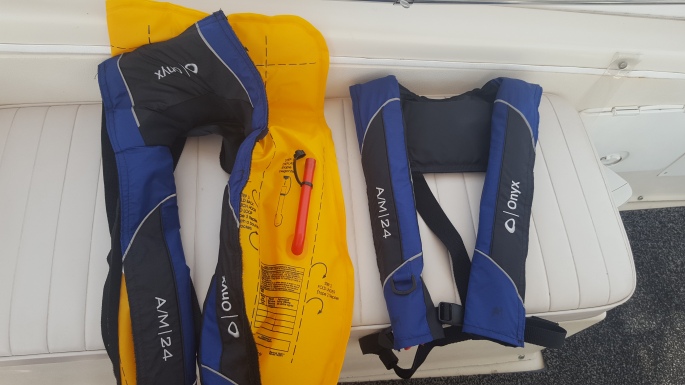 Bluff Hall Plantation
Bluff Hall is a historic residence in Demopolis, Alabama.
Bluff Hall was built in 1832 as a father’s gift to his daughter, as a Federal Style house (brick).  It was modified in the Greek Revival style (white, tall pillars, large porch) in the 1850’s.
The displays in the house include clothing, Empire and Victorian furniture and an exhibit on local history.  Bluff Hall is listed on the National Register of Historic Places.
We went on a 1:1 tour with Kayla Jordan, an 18 year old dossin who had immense history on the place. She told us that about 70% of the furniture, art, clothing in the house is original 1830’s vintage. Much of the house is influenced by the fascination the owner, Allen Glover, had with European style. 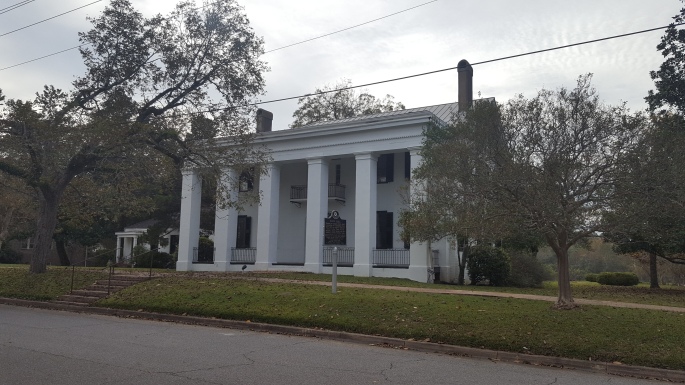 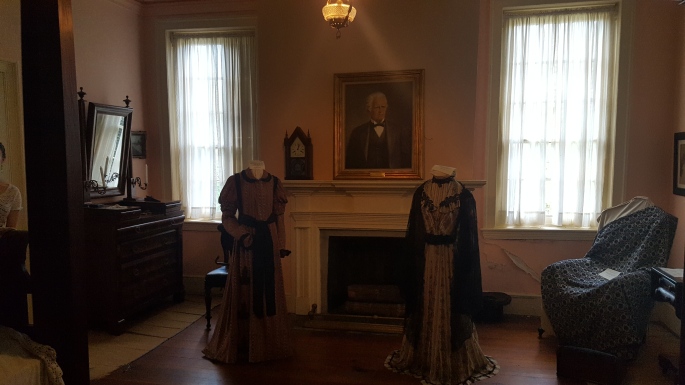 Mark/Sandy Holtsclaw – Pizza Night
On Sunday afternoon in the laundry room at King Fisher, we ran in to Sandy Holtsclaw. We had initially met Sandy and her husband Mark a month or so ago at Pebble Isle Marina in New Johnsonville. It was a strange re-encounter because after we sent the blog post with Mark/Sandra’s photo at Pebble Isle, we found out a few days later that Mark/Sandy are related to Jonell’s brother Adam & wife Patty Silorey. They are the in-laws of Patty’s niece Kristen married to Mark/Sandy’s son Kevin (again a small world). We had pizza/beer/ & great conversation on Gettin’ Looped with Mark/Sandy Sunday night.

Next Stop = The famous Looper destination – “Bobbys Fish Camp”, last fuel stop on the Tenn-Tom before Mobile.
Stay tuned for more on Bobby’s in the next post.