Short update today.
We continue to work our way up the Florida Keys to Miami, where we will say our sad farewell to Rick & Linda on Friday.

Feb 26 – Mon
On Monday we left the Mangrove Marina on the island of Tavernier to move to our next stop, the island of Key Largo.
Our marina at Key Largo was a place called The Anchorage Marina & Resort. It was very Americana & looked like it would have been a great resort in the 1960’s. We were supposed to stay 3 nights, but we only stayed 1 night. The place was not really that bad, we did warm up to it. It had a great view of Key Largo Bay, a pretty nice old pool with a great view of the bay, a great restaurant next door, and all the folks were very nice. But we envisioned nicer stops down the road and decided to stay only 1 night. 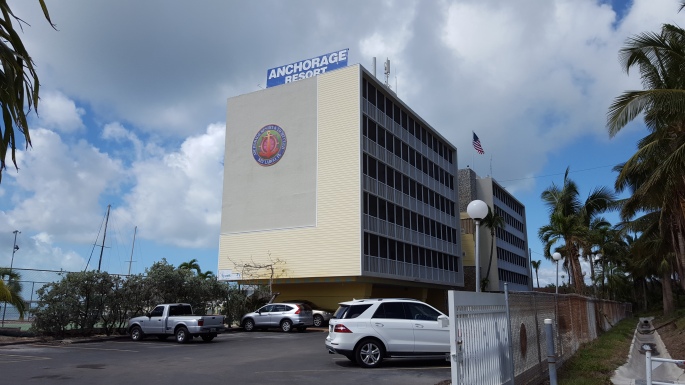 To get to the Anchorage Marina & Resort, we again took the inside Bay ICW route (vs the Atlantic) . We went through more shallow water (4-5ft) and also traveled through some pretty cool mangrove fields. The path thru the mangrove fields was actually deeper (8ft) than crossing the bays on the ICW.

While at the Anchorage Marina & Resort, we enjoyed Lunch & Dinner at The Blackwater Siren. A waterfront tiki-bar restaurant with a nice view of Key Largo Bay located right next door to the marina. 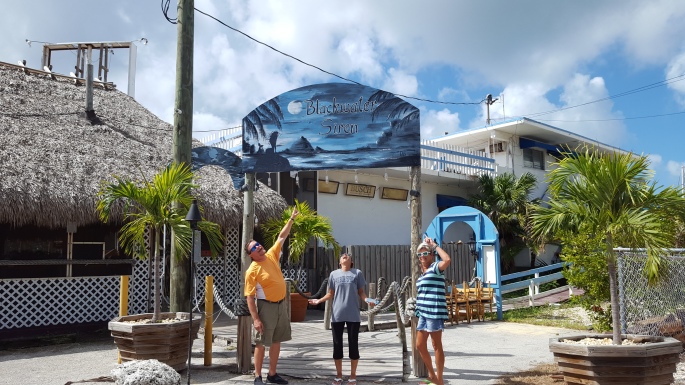 Feb 27 – Tues
On Tuesday, we moved on back/back days for the first time in a long time. We moved after only 1 day for a couple reasons. First, the Anchorage Marina & Resort was not worth a 3 day stay as originally planned, plus we wanted to give Rick & Linda an overnight anchoring experience. Based on the recommendation from our Looped god-father Dave Sylver, we went directly to Miami from Key Largo (we had planned on Key Biscayne) and anchored at a place called The Miami Marine Stadium.
The anchorage was awesome. It was in a large, 3 side protected bay just off the ICW directly across from downtown Miami.
The Miami Marine Stadium has significant history. It is a 6500 seat waterfront structure built in 1963 as a venue for both music concerts & powerboat racing, and also is currently the home and training grounds for the Miami Rowing Club. The grounds around The Stadium & surrounding water were also recently used for the Miami Boat Show, and they were still tearing down all the tents & docks from the recent Boat Show Feb 15-19th.
The last major race in the Stadium was the 20th Annual Budweiser Hydroplane Regatta in June 1990. In the wake of Hurricane Andrew, the structure was declared an unsafe building under Miami-Dade County building code on September 18, 1992.
Since its condemnation in 1992, the stadium has become a haven for graffiti artists, but remains an attraction for its photographic panoramic view of the central business districts and barrier islands of Miami. The surrounding area & water are still used for events like the Boat Shows.

Graffiti artists have taken over + boat racing in the hey-day of the Stadium.

While anchored, we had a beautiful view of the Miami skyline, saw dolphins, visited and talked looping with the local harbor police, watched storms move past the surrounding Miami area, watched sculling teams train, watched the boat show equipment teardowns, and had an awesome grilled hot dog & chicken alfredo dinner.

We then spent most of the night on the aft deck of the boat staring at the skyline and socializing with Rick & Linda. It was a great night with our great friends the Spraggs !

We had no internet and thus no TV while anchored. We did get some air channels but mostly non-english speaking channels or very old tv series (In the Heat of the Night).

So the night ended with another viewing of Tommy Boy (shout-out to Ronzello & Gibbons).

Next stop = The Sunset Harbour Yacht Club on Miami Beach, and farewell to the Spraggs after what seemed like a very quick 1 month stay on Gettin’ Looped.