We checked in on Friday to The Harbour Town Yacht Basin, which is on the southwest corner of Hilton Head Island.

Hilton Head Island is a small resort island ( 5 miles wide  & 12 miles long) north of Savannah Georgia & south of Charleston South Carolina. The island is named after Captain William Hilton, who in 1663 named “Hilton’s Head” after himself. The year-round population is pretty small at 37,099 , although during the peak of summer vacation season the population can swell to 150,000.

The Harbour Town Yacht Basin is a beautiful resort marina. We knew this place was different when we arrived, and immediately after tie-up were presented with a welcome information package & a BOTTLE of WINE.

The Harbour Town Yacht Basin is in a circular formation with shops, restaurants, a concert area, rocking chairs, condos, a light tower, and a golf course – all surrounding the marina. 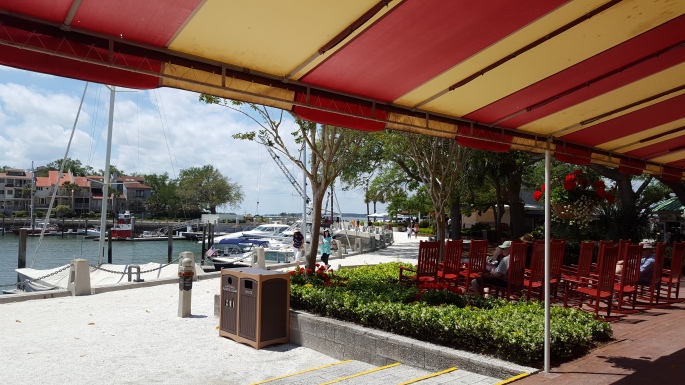 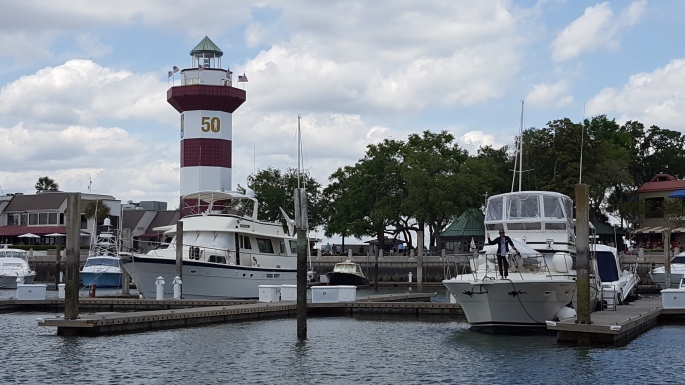 The Golf Course was not just any golf course, the marina overlooks The Harbour Town Link Golf Course, home of the RBC Heritage PGA Golf Tournament. The professional golfers were just here two weeks ago, we watched the tournament on TV two weeks ago in anticipation of our arrival.
You can see the 18th green from the marina. The workers were still in the process of taking down all the spectator stands. 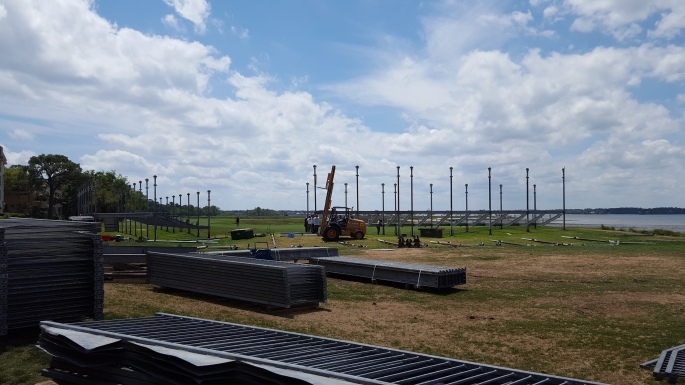 As the light tower shows, the RBC Heritage Tournament has significant links to the PLAID design. Since the RBC Heritage Tournament almost always falls the week after the Masters on the PGA Tour schedule, golf fans probably figure there’s some jacket envy of the Masters green jacket. However, the history of the plaid jacket at the RBC Heritage suggests that’s not the case.
When organizers started the tournament over Thanksgiving weekend in 1969, there were no plaid jackets. That was changed a few years later, when organizers were inspired by the famous 1790 golf print of Sir William Innes, who was captain of the Society of Golfers at Blackheath in Scotland, playing in a tartan jacket. Innes’ image was also included in the tournament logo until RBC became the tournament title sponsor in 2012. The Tournament held two weeks ago was the 50th anniversary of the Heritage Golf Tournament.

For dinner on Friday nite, we went to the restaurant at the golf course, called “Links an American Grill”. As expected, it was a somewhat opulent looking place, but the staff was very friendly and we had a wonderful dinner in a beautiful environment. 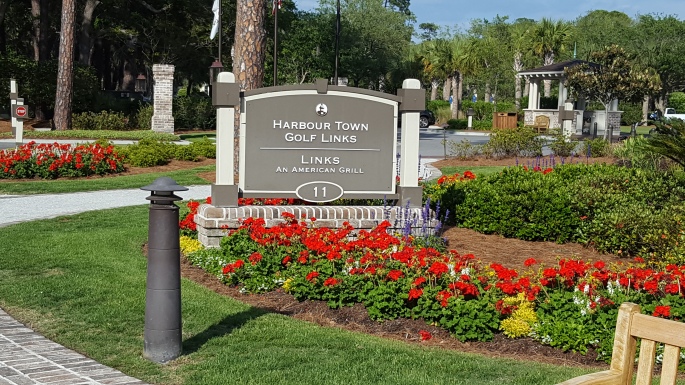 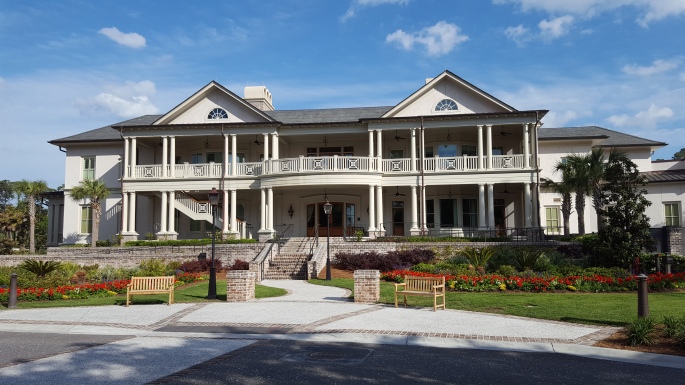 Dinner was awesome. I had Swordfish with Crab & Nellie had Chicken. Both meals were very good.

After dinner, we hung out at the course for about an hour to digest the food.

After returning back to the marina, we sat in the rockers, drank free yettie juice, and listened to the easy music entertainer. It was a wonderful first day/night in Hilton Head.

Apr 28 – Sat
We had not had “Beach Day” in quite a while, and the weather was a wonderful 80 & sunny, so Saturday became beach day at Hilton Head.

The SeaPines Resort Complex which owns the Harbour Town Marina we are staying at, also owns several other places on Hilton Head Island : 3 Golf Courses, 6 Tennis Courts, 9 Restaurants, Horse Riding Stables, a Fitness Center with a large Pool, and a Private Beach connected to the SeaPines Beach Club.

Prior to going to the beach, we completed a “Dress Shopping” experience on Saturday morning. On Friday afternoon prior to dinner, we walked around the many shops in the Harbour Town Complex. There was a very nice dress shop named The SM Bradford Co, and Nellie found a dress she liked a lot in the window. She tried it on Friday afternoon, thought about it Friday night, went back to try it on again in high-heeled shoes on Saturday morning, and we decided to buy “The Hilton Head Dress”.
Jonell will wear the dress at the upcoming wedding of our son Daniel & fiancée Megan Durrant, when we return in September.
To keep you all in suspense, we chose to not show the dress on the blog, only Megan has seen it.

We went to the beach about noon, staked out our chairs & umbrella, and then went up for a little lunch at the “Coast Restaurant”, which is part of the Beach Club Resort. 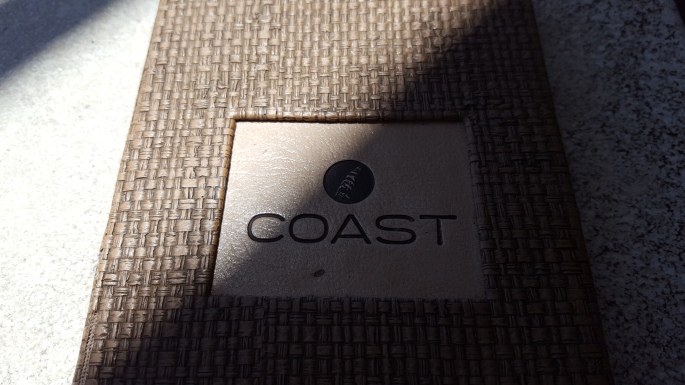 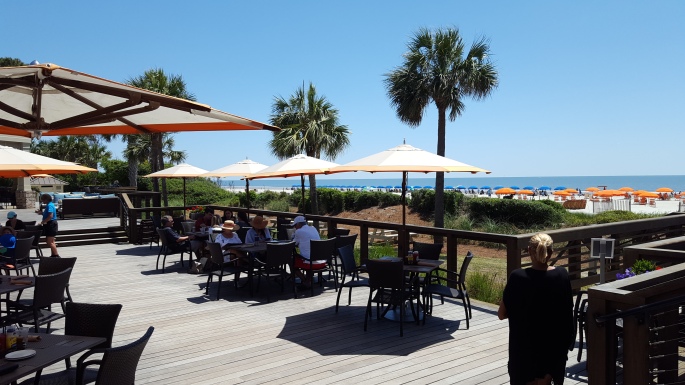 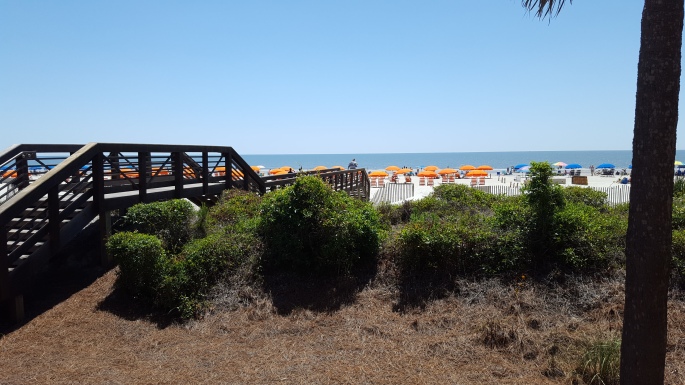 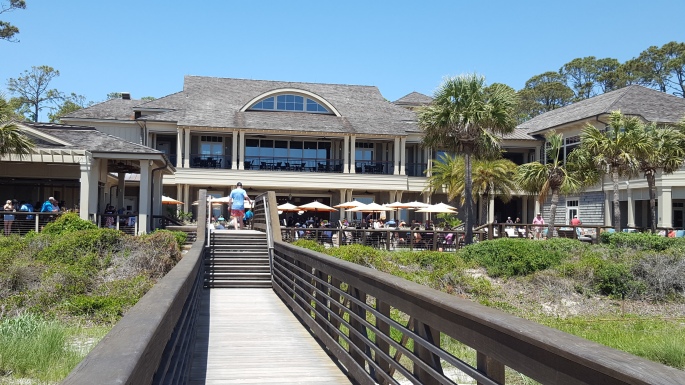 After lunch, we resumed our heavily planned day of lazing in the lounge chairs at the beach. 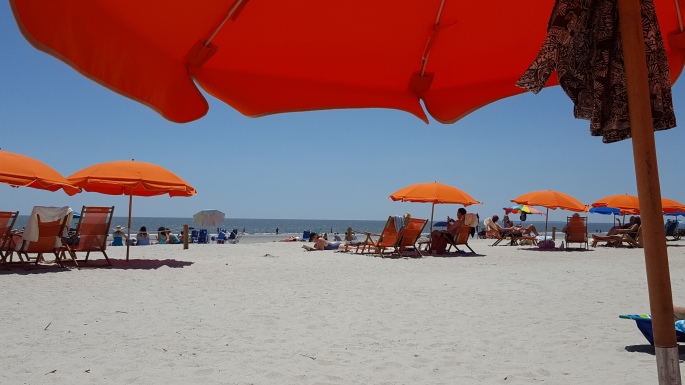 A few hours later, I got bored and went for a walk down the beach. The sand up by the resort was a very nice, very soft, very white sand. Reminding me of the beaches in western Michigan. The sand down by the water was hard-packed, reminding me of Daytona. It was also interesting to see that the beaches were mostly uninhabited. Other than the few resorts on the beach (SeaPines & Hilton), most of the beach was lined with private homes, so you would see clumps of people in front of the resorts, and then nobody for miles of beach. 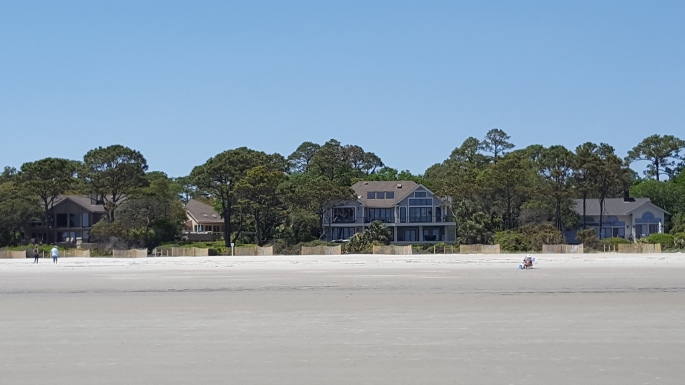 After Beach Day, we came back to the boat about 4pm, watched a little golf on TV, cleaned up with some showers, and walked around to several restaurants to scope out our dinner choice.
We ended up at the Quarter Deck Waterfront Restaurant, just below the Light Tower. There was outdoor seating available, but the inside upper deck seating was even better. It had great ambiance, great views of boat traffic coming in/out of the marina, great views of the 18th green on the golf course, and a wonderful sunset thru the sun-screened tinted windows.

We ended the night with a little more harbor side music, then went back to the boat and caught up on 4 episodes of The Amazing Race TV show (I also hope to do this someday).
Day 2 at Hilton Head is now complete.

Apr 29 – Sun
Nellie was gettin’ her beauty sleep on Sunday morning, so I went for my morning body evacuation to the shore-side restroom. After taking care of the paperwork, I spent a little time sittin’ on the harbor-side rocking chairs, listening to the soft soothing jazz music, & reading the complimentary newspaper. I can’t tell you how relaxing it was and what a great way it was to start the day.

To further enjoy the soft start of the day, I spent a little time walking around the harbor looking at all the wild variations of Oak Trees on the SeaPines grounds. 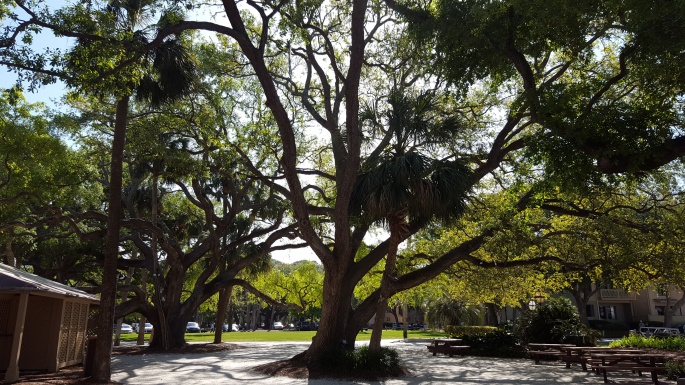 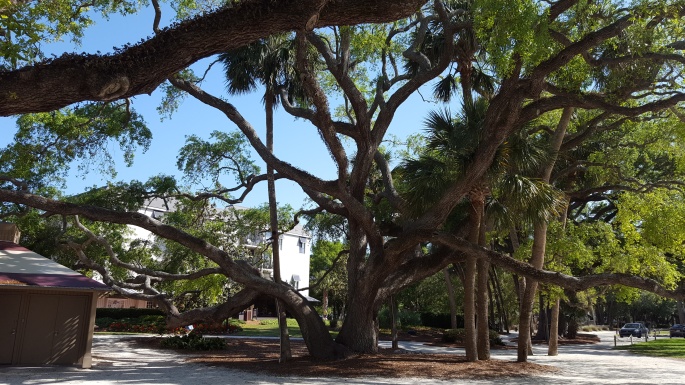 Later in the morning we went on a short 1 mile bike ride to another one of SeaPines shopping/eating areas. We had some breakfast sandwiches at a place called Low County Produce Market Cafe, met a wonderful woman named Nancy from Beaufort North Carolina, who gave us tips on what to do & see when we get there in a few weeks. The bike ride was wonderful. SeaPines has over 15 miles of bike trails in tree-lined, flower adorned pathways. The restaurant was quaint, and the food was good. 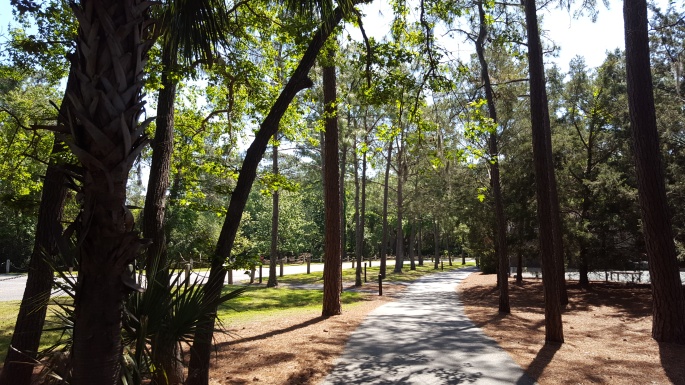 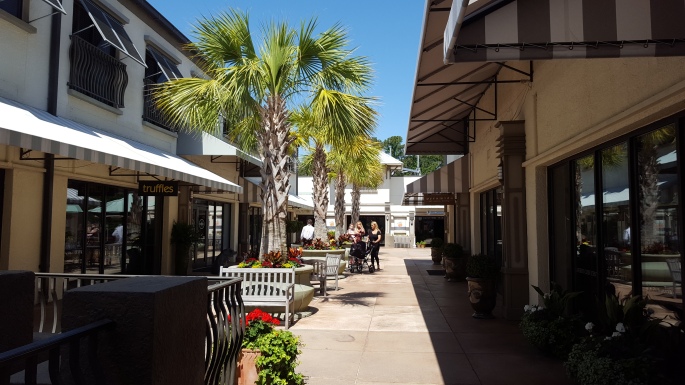 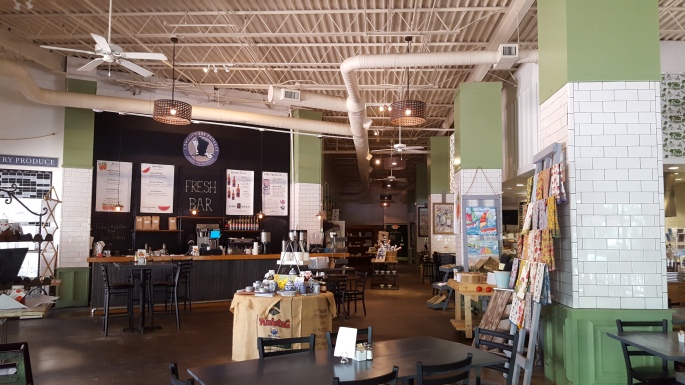 On the way back from the bike ride breakfast, we rode passed the many Tennis Courts at the resort, and went to the Harbour Town Inn & Club Resort Pool. It was 85 & sunny, the water was heated to the perfect lounging temp, and the couple next to us was playing nice pool music. It was a great afternoon. 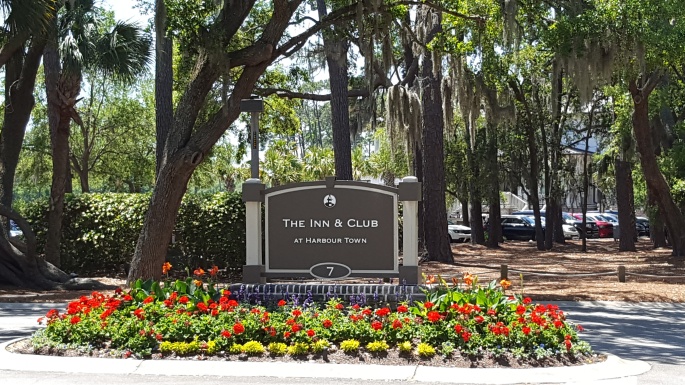 After spending most of the day at the Pool, we came back to the ss Gettin’ Looped and watched the Zurich Classic Golf Tournament for a couple hours.
We then went to dinner at The Harbourside Café right in the marina harbor. We could see our boat from the restaurant. There was a good musician playing mainstream pop music. 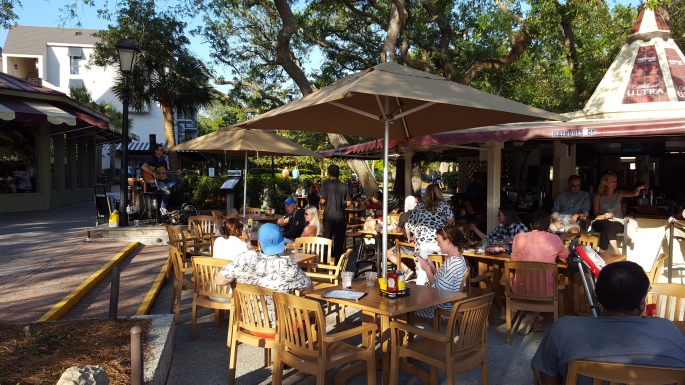 After dinner we went for a walk over to the Harbour Town Links Golf Course, where the RBC Heritage Golf Tournament was held 2 weeks ago.
It was late in the day and there was only 1 guy on the course just finishing up a round. The guy playing turned out to be a Harbour Town Links employee. We asked the guy if he would take a photo of us near the flag on the 18th green. He was a nice guy and happy to help.

It was a splendid weekend at Hilton Head.
This port has become one of our favorites, definitely in the Top-10 !
I knew that it would be a nice place and somewhat opulent, and I expected the people to be a little stuffy. But on the contrary, everyone we met from harbor employees to the other visitors, were very friendly people.
It was a great stop.