Hey folks,
The past week has been quite fatiguing, yes even Loopers get tired !

Since we last saw the Hinman’s in Beaufort (BoFert) NC on may 28th, we have covered over 250 miles in 7 ports in 7 days (Beaufort-Oriental-Belhaven-Columbia-Elizabetrh City-Portsmouth-Hampton).

We are hustling for a few reasons
> We spent more time than planned in several ports including ; Fort Lauderdale, St Augustine, Savannah, Beaufort SC, etc.
> We need to get to Solomons Island Virginia by June 6th, 2 days in advance of the arrival of my Junior High School Pal, Dave Noffert & Admiral Debbie.
> We still need to stay on a track for being home by Labor Day for our son Daniel’s wedding.

Todays ride from Portsmouth Virginia to The Salt Ponds Marina in Hampton Virginia, had us pass thru Norfolk.
Setting our ports every 30-50 miles just worked out that we stayed in Portsmouth & Hampton, and not Norfolk, maybe a tactical error.

But we did pass thru downtown Norfolk and saw a few cool sights.
We saw the downtown waterfront with ferris wheel, lots of commercial ships, and LOTS of Naval Ships. 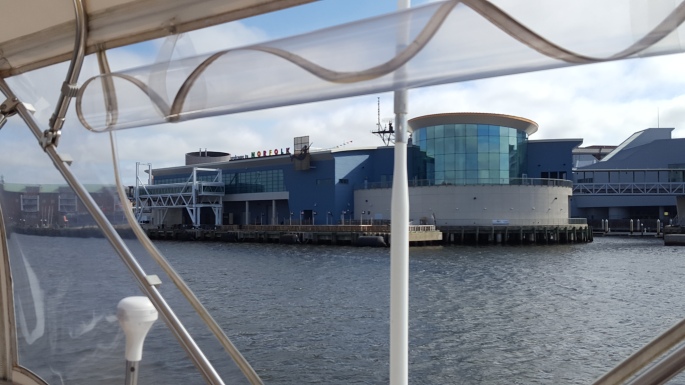 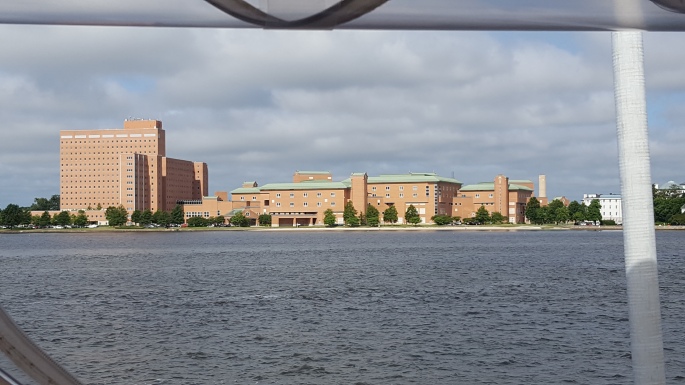 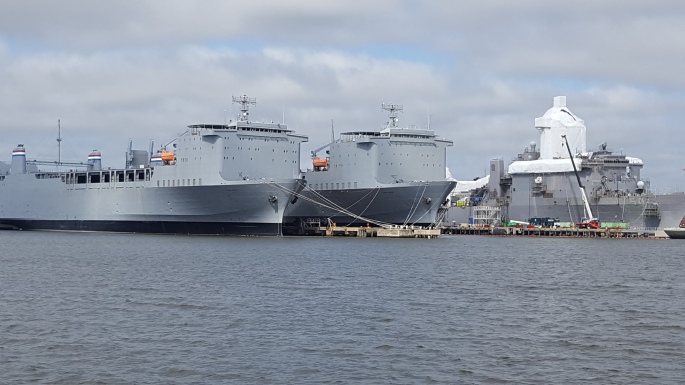 REALLY COOL !
While traveling thru Norfolk, we heard a lot of VHF Radio chatter between The Warship #77 & The Coast Guard.

The Warship #77 was planning on heading out to the Atlantic Ocean for unknown objectives.

I have since found out that Warship #77, is the USS George H.W. Bush stationed at Naval Station Norfolk.

About 30 minutes after we heard the radio chatter, we saw 6 coast guard boats pass by us with gunmen stationed in the bow of the coast guard boats. We got video at the last minute as most of the boats had passed = https://youtu.be/xX8FDpxJflw

Another 30 minutes later, we actually passed The Warship #77 with the 6 Coast Guard Boats creating a perimiter around the warship. We passed far to the port side of the Naval actions. About another 45 minutes after we passed, the Warship finally departed. We could just barely see it at that point.

After all the Naval excitement, we entered the very southernmost tip of Cheasapeake Bay and made our way to The Salt Ponds Marina in Hampton Virginia.
The Salt Ponds Marina is pretty nice, having floating docks, a nice pool, nice views, and another good price of $65/night, vs the $85/night we had paid 1 stop earlier in Portsmouth. 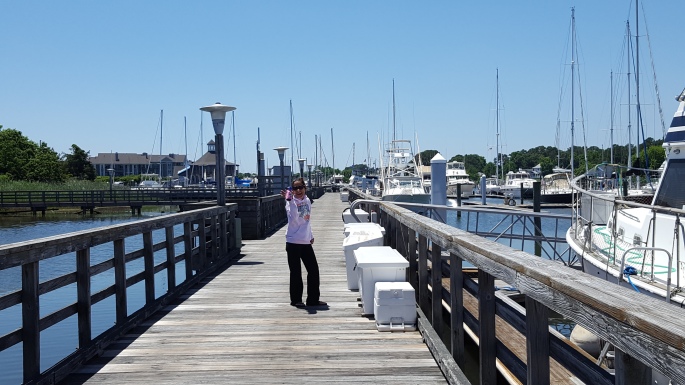 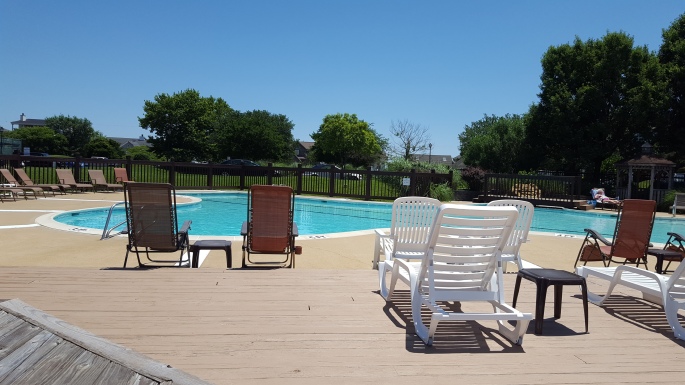 We only had 1 night in Hampton, but we had arrived fairly early at noon, and accomplisehd a lot.

Nellie got 2 loads of laundry done & we had 2 of our flybridge Isenglass zippers repaired by Wendy Walton from Rhaynie Day Canvas, on-site at the marina. As you have read on previous posts, we have had the threads of several of the canvass panels come loose during the trip. I have been able to hand-sew a couple of the zippers to canvas, but was not really looking forward to hand-sewing about 3 feet of zipper into two different panels of Isenglass. The Isenglass is very thick and would be difficult to sew.
Having Wendy’s service on-site was great, we got same day service, and at an increadible price of $25 (I gave her $50). 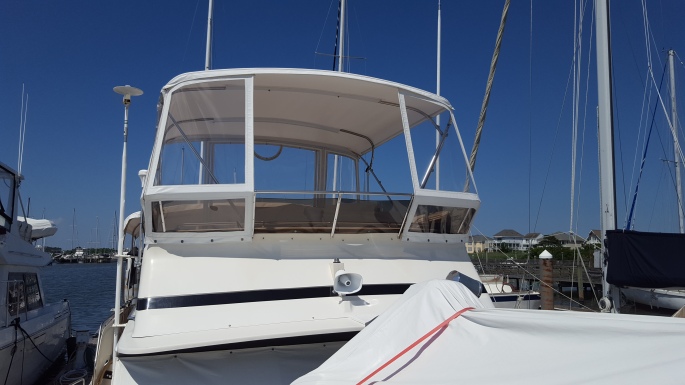 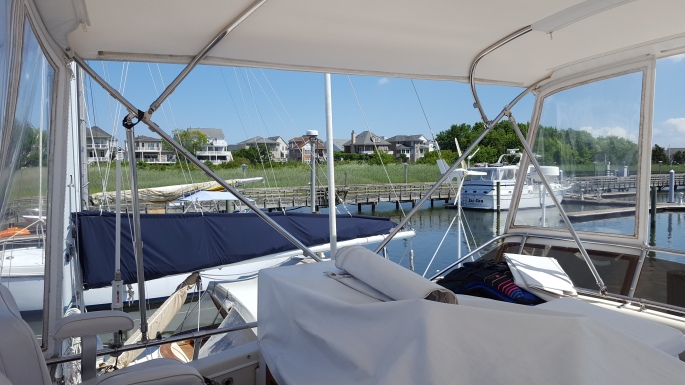 We were also able to see a little bit of the town, taking an uber to a place on the bay called, The Deadrise Fish House.
Nellie had Fish Tacos & I had a LARGE Shrimp & Scallops Burrito. 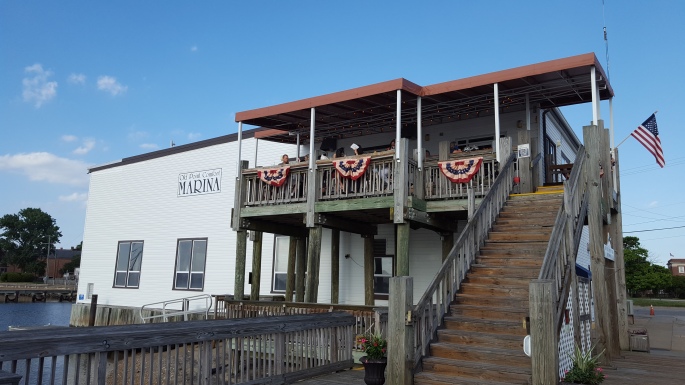 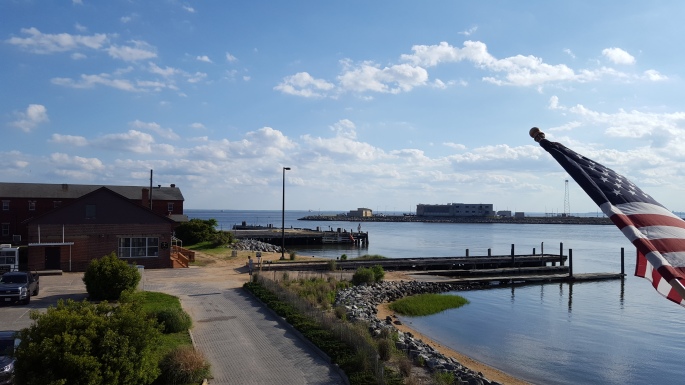 After The Deadrise, we walked around the park a little.

We found an interesting monument marking the zero-mile location of the Cheasapeake to Cincinnati Railroad.

The night ended with a couple Yeti Juices & a Birthday call to my brother Kenny.
Today is Kenny’s 52nd birthday !

Jonell & I called to give the “Murphree Rendition of Happy Birthday to You”, I believe that many of you readers have experienced this musical treat.

It sounded like his birthday had been celebrated over the weekend at a Tiger game.
Today/tonight was a normal work day for Kenny & Monday night sports night with the boys at his house.