Jun 10 Sun
On Sunday we were planning to move from Solomons Island to the St. Michaels Marina.
Our planned departure was for 8:30am, with a 7:30am wake up time.
At about 6am I was awakened, when I heard the cabin fan go off !
I checked the lights & refrigerator, all of our power was out !
After about 10-15 minutes of “oh-crap”, we discovered that the power was off to the entire marina. No doubt, the storms from the previous night had something to do with the power outage.
We took some very early showers, and bumped up our departure time to 7:30am.

The ride to St. Michaels was a 54 mile ride on the open water of Chesapeake Bay.
The wind/wave forecast from 3-4 days ago suggested very rough waters. But the forecast changed to very calm waters after the storm. To our benefit, the new updated forecast was correct, the ride to St. Michaels was very smooth with no rain. We were blessed by the man above again. It was especially good to have some smooth waters on the Chesapeake for the Nofferts only Looping ride with us. It was a wonderful travel day !

We arrived in St. Michaels to smiles & laughter.
After tie up, we cracked the ceremonial beers in honor of another safe arrival, now in port #95, the St. Michaels Marina. 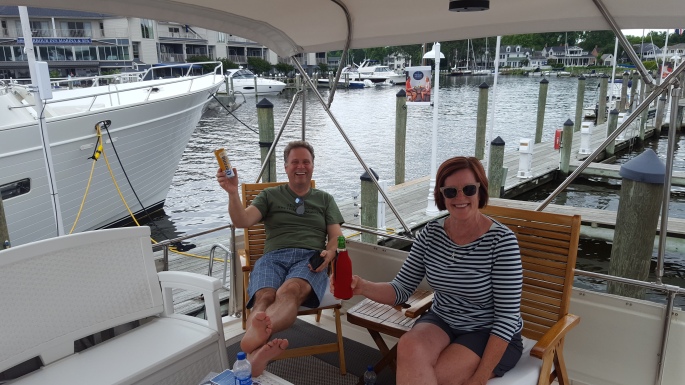 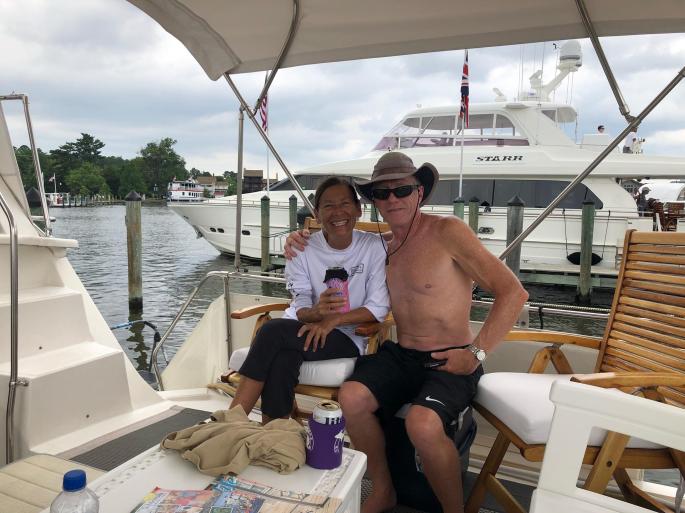 After gettin’ settled in, we went to lunch at the Foxy’s Harbor Grill.
There are several restaurants right on the water at the marina, Foxy’s is one of them.
We just split some sandwiches & appetizers as a temporary fix before a larger planned dinner.

After the snack at Foxy’s, we rented one of the St. Michaels Marina GEM Golf Carts, and went on a 2 hour tour of the town. 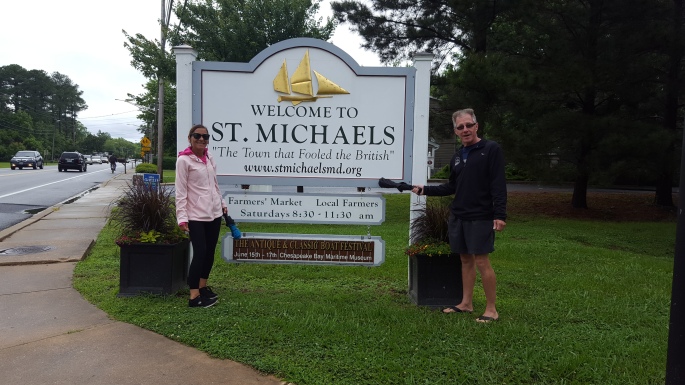 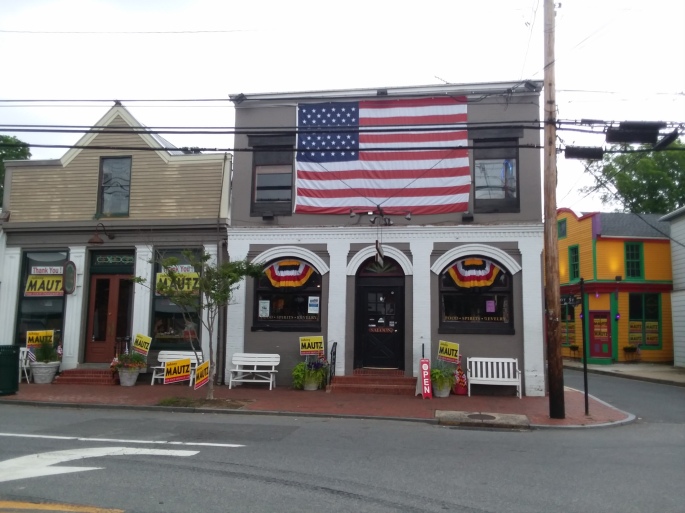 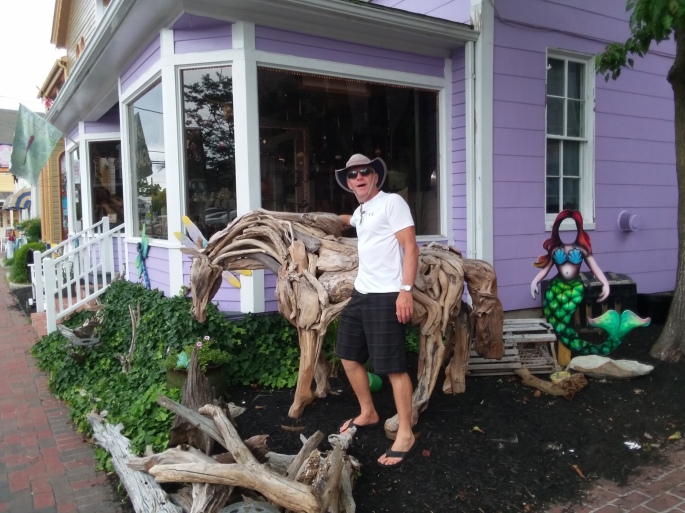 The Harbormaster Mike had told us about a place called The Inn at Perry Cabin.
After cruising the city, we drove the cart about 2 miles to the outskirts of St. Michaels, and arrived at the Inn – a very fancy resort, with a very fancy hotel, bar, and beautiful waterfront lounge area. 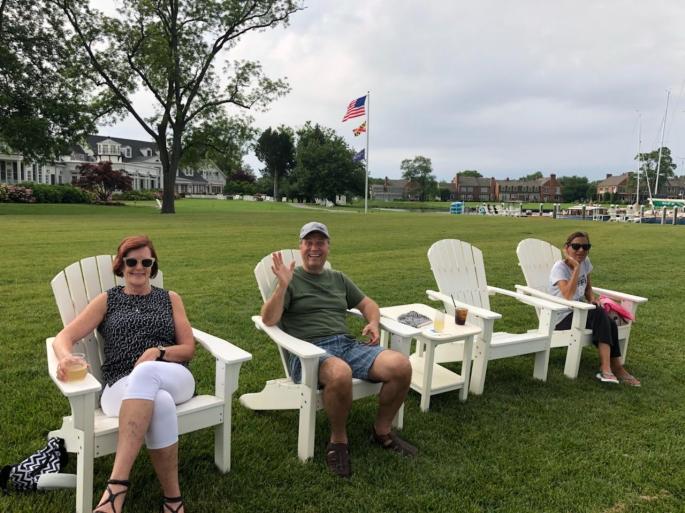 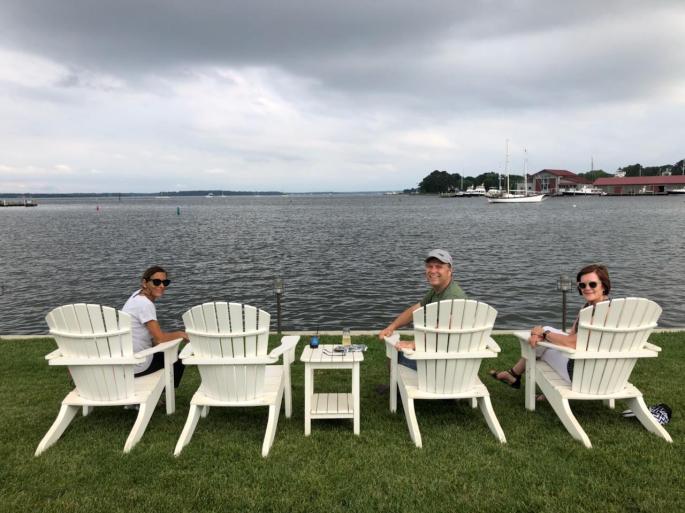 After drinks at the beautiful Inn at the Perry Cabin, we returned to the boat, got showered up, and headed to dinner at The St. Michaels Crab & Steak House. Along the way to the restaurant, we found the display of a very famous Tow Rope (Tow Line ?). 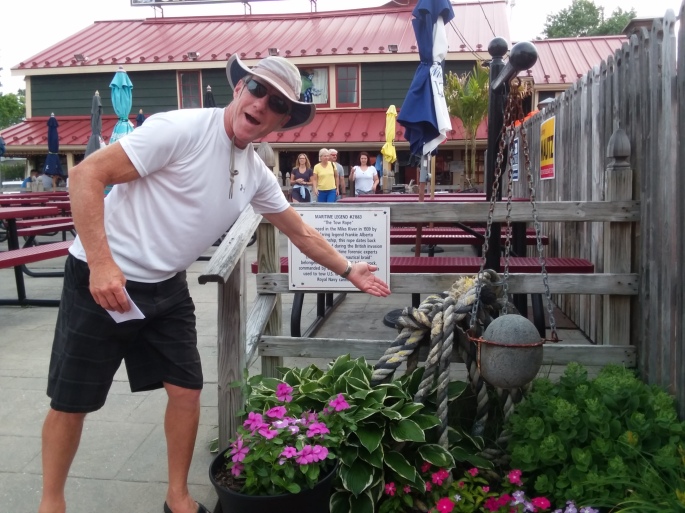 For dinner, Dave & I had the St. Michaels famous Steamed Blue Crab !
Neither of us have had much steamed crab eating experience (we have eaten a lot of prepared crab meals).
We had crab opening lessons from waitress Connie, and proceeded to pull the treasure from the sealed marine crypt. 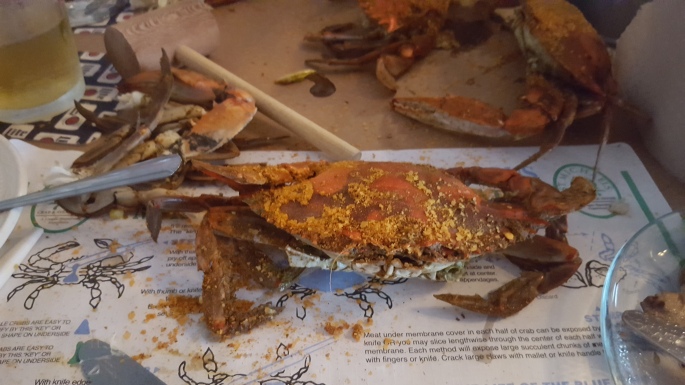 The crab was good, but for me it was still not worth the effort for the limited bounty harvested or the price. We did also split a New York Strip Steak – it was a lot easier to eat and more filling !

I apologize to all you Crab Lovers.

Jun 11 – Mon
Monday was get-away day for the Nofferts.
Luckily their flight was not until about 5pm, so their departure from St. Michaels to Baltimore in the taxi was not until 2pm.

So we planned to use the very rainy morning 1/2 day to see the St. Michaels Museum.
We ended up finding out that the museum was closed on Mondays, but 1 phone call later, docent & local tour guide Kate, opened the museum only for us ! 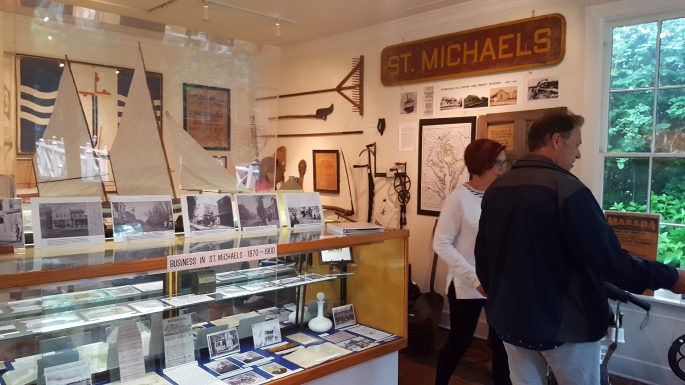 Kate gave us about 90 minutes of St. Michaels history, and an extensive discussion of the history and connections to St. Michaels, of Frederick Douglass.

One of the interesting things Kate told us about was a series of 2 attacks the British attempted on the local colonists of St. Michaels.  After 500 locals put up a good battle towards the 1000 British soldiers, the British decided that the fight was not worth the rewards and left the area.
What the British did not know, was that the area that they were battling for was mostly fields & farms & not the main area of town with significant ship building activities.
St. Michaels is divided into 2 large sections separated by the St. Michaels Harbor.
Because the British left without significant battle, St. Michaels still calls themselves today  ” The Town that Fooled the British”

The other interesting stories were all about Frederick Douglass, and how after escaping from slavery in Maryland, he became a national leader of the abolitionist movement in Massachusetts and New York, gaining note for his oratory and incisive antislavery writings. In his time, he was described by abolitionists as a living counter-example to slaveholders’ arguments that slaves lacked the intellectual capacity to function as independent American citizens. Northerners at the time found it hard to believe that such a great orator had once been a slave.  Frederick Douglass wrote 3 autobiographies during his lifetime, as he aged and gained perspective throughout his life.
> Narrative of the Life of Frederick Douglass, an American Slave (1845)
> My Bondage and My Freedom (1855)
> Life and Times of Frederick Douglass (1881)

After the St. Michaels Museum, we went for a walk to The Lyon Distilling Company.
We visited the distillery because Dave’s mother Hanna’s maiden name was Lyon.
So Dave purchased some souveniers with the family maiden name, and we had a few free samplers of the Lyon Liquid product. 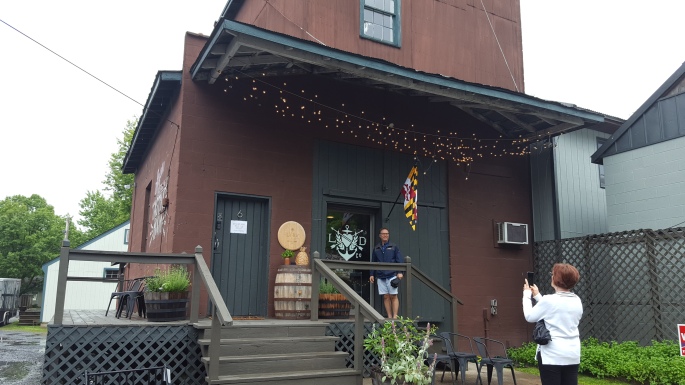 We returned to the boat, watched a little golf pre-tournament hype for the upcoming US Open, and Dave & Deb got packed.

The Noffert visit with us came to a sad ending, after a wonderful and sometimes rainy 4 day visit.

Next stop = An exciting 1 week stay in Annapolis Maryland !