July 1 – Sun
Sunday was an awesome and special day in the Great Loop Tourist Life of Mike & Jonell.
We went to One World Trade Center & The 9/11 Museum and Memorial.

I consider this a very special post, please read the second half about the 9/11 Museum and Memorial when you have time, don’t rush through it. 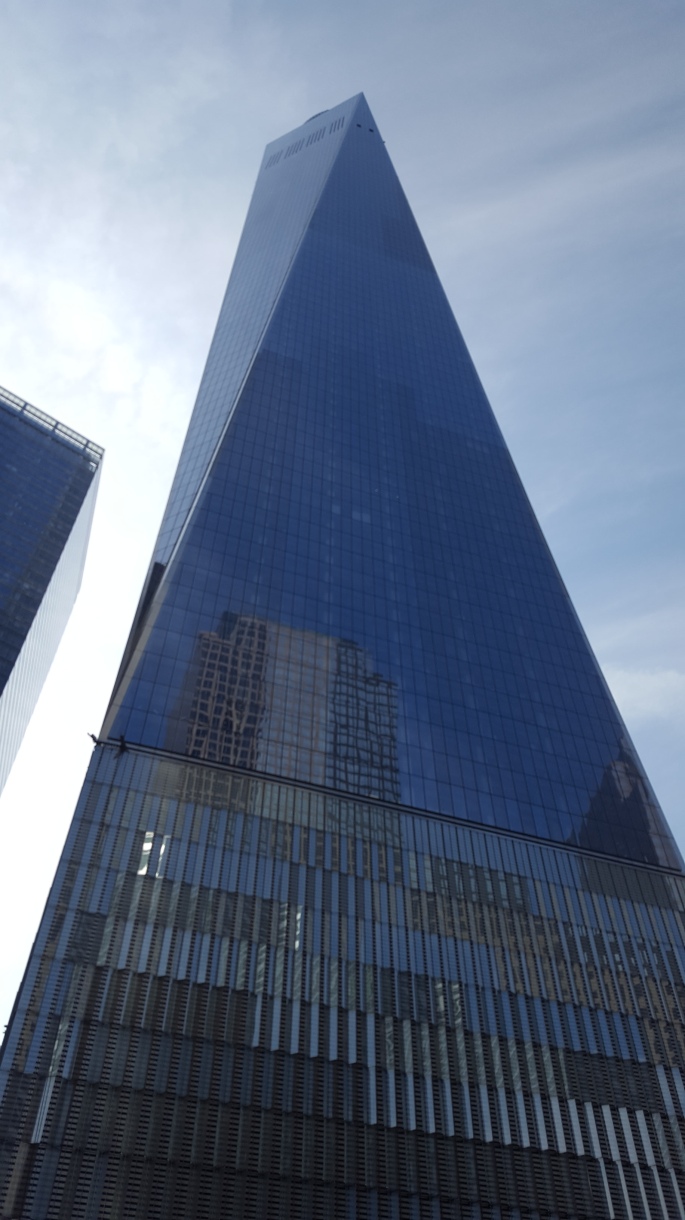 We had reserved a 10am entrance time, and this ended up being a great idea. We beat much of the crowd, and there were only 4 people in our elevator.

The folks at One World definitely had their act together in moving you through security, into the elevators, getting you hooked up with an IPAD, and on your way around the 102nd floor observation deck. 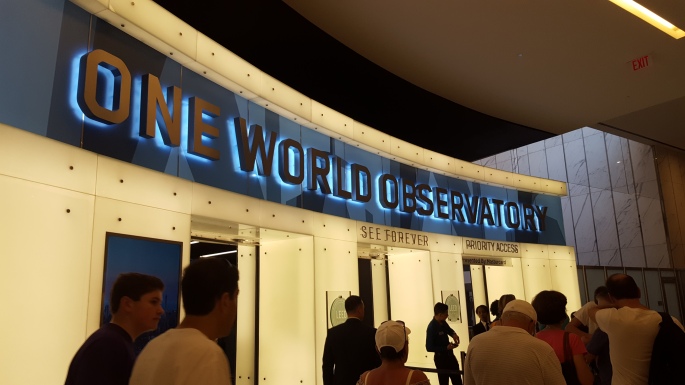 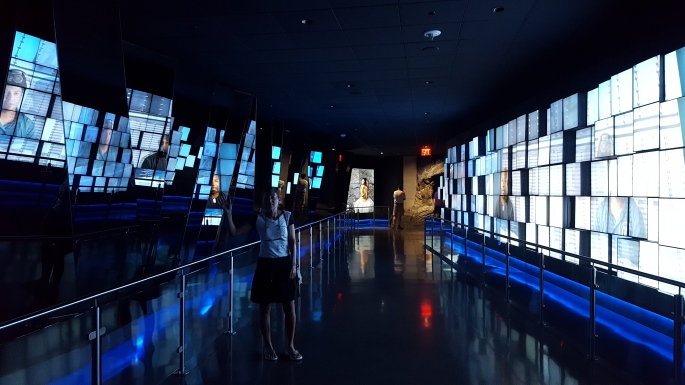 The elevator ride up took less than a minute for 102 floors, and did not have open windows. While traveling up there was a video on the walls showing the evolution of Manhattan over time, with new buildings appearing before your eyes.
Check out this video = https://youtu.be/QNxamOLl5JY

After you arrive at the top, they equip you with an IPAD which you aim in the direction that you are looking, and the IPAD identifies major landmarks. Once you identify a landmark you are interested in, you can hit a link which zooms in on the building and then gives you a little history.
It was pretty cool. I attempted to copy some of the links but was not surprised to find out you cannot copy the links.
If interested, you can use the info below to see many of the videos of major landmarks ;
> website = https://revisitoneworld.com/gallery
> email = mjmurphree@comcast.net (my junk email file)
> password = RPiTuA9a 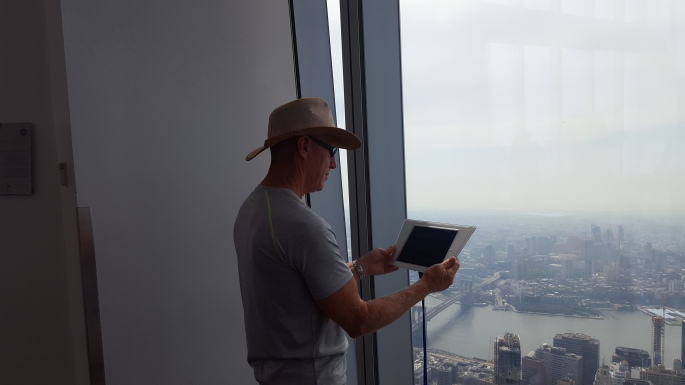 Once you started the tour, the IPAD was set up along points of a compass.
We started in the West Quadrant – we could see
> Statue of Liberty Island
> Ellis Island
> The Ole Train Station
> Our Liberty Landing Marina

In the North Quadrant, we could see – The Upper Hudson River & Upper Manhattan

Next was the East Quadrant, we could see – Manhattan, Brooklyn & the Brooklyn Bridge.

It was like Chicago & Baltimore, a wonderful viewing experience.
But it was nothing compared to the place we went to next ! 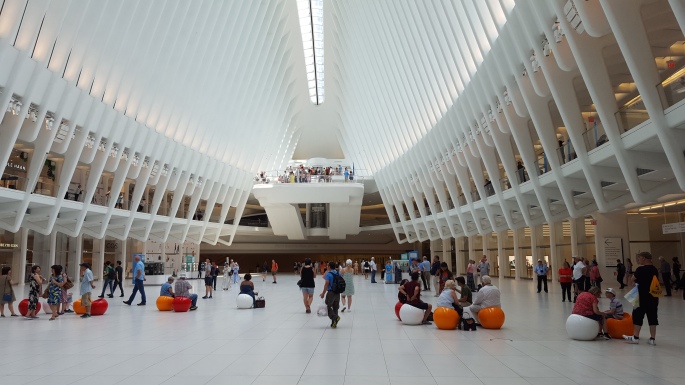 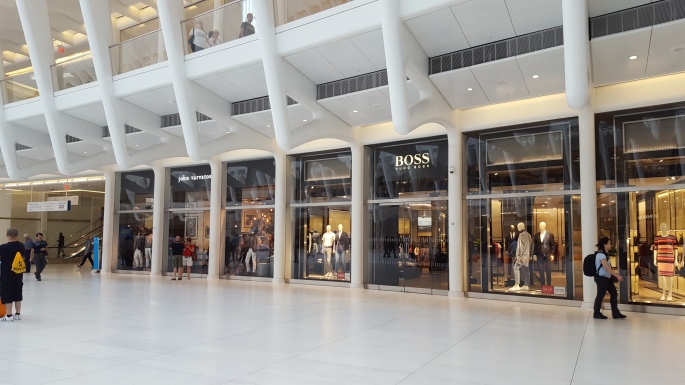 Then we arrived at the 9/11 Museum & Memorial, and that’s when the day started to get really interesting. Much like the Old Slave Market in Charleston, this place induced significant emotions, and created a memorable life experience for us.

It will be easiest to tell the story with the pictures, so I will just show the photos and attach captions to the photos.

Before we start, I must mention that the 9/11 Museum & Memorial is dedicated to the 9/11 victims & first responders at The North & South World Trade Centers, but it is also dedicated to memories of ; The 1993 World Trade Center Bombing, The Pentagon Attack, & the Flight #93 Heroes who most likely saved The White House or The Nations Capitol Building. 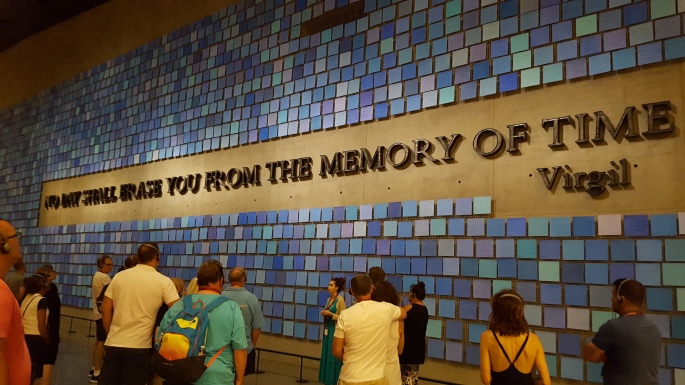 This Wall is the wall of the Repository which encloses the Unknown Remains of people who perished in the Twin Tower attacks. Ellen told us that 40% of the victims are unclaimed. All cases are still open and will remain open, but much of the DNA has been destroyed and lost. The Big Bold Letters on the wall are made from steel of the original towers. The wall was designed by artist Spencer Finch, and Each of the Blue Squares on the wall are a different shade of Blue. The memorial is inspired by the memorably clear, intensely blue sky of that fateful morning combined with the goal of each Shade of Blue representing the different personalities of all the victims. The squares are individual pieces of Fabriano Paper all hand painted with water colors and hung to represent all the missing persons flyers hung in the city after the event. The Repository is maintained by the Medical Examiner of NYC. 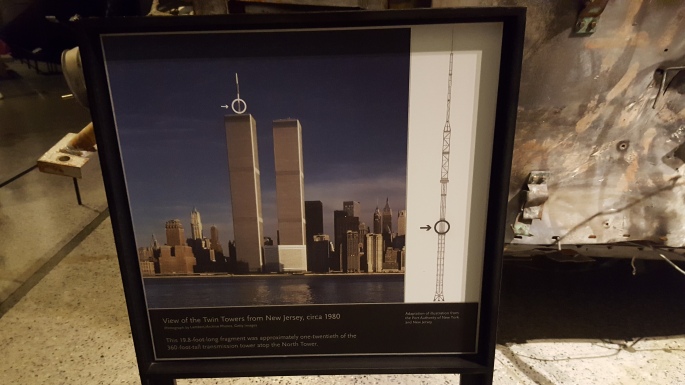 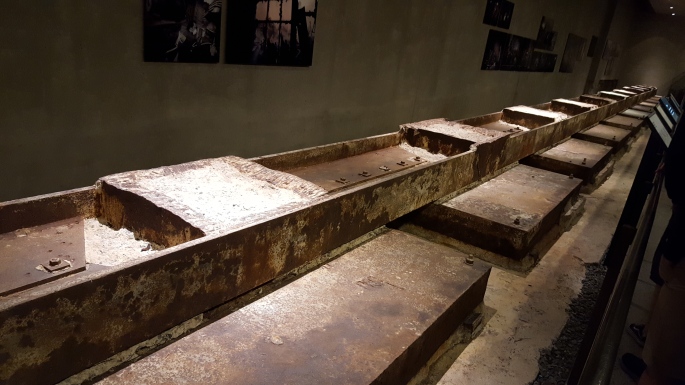 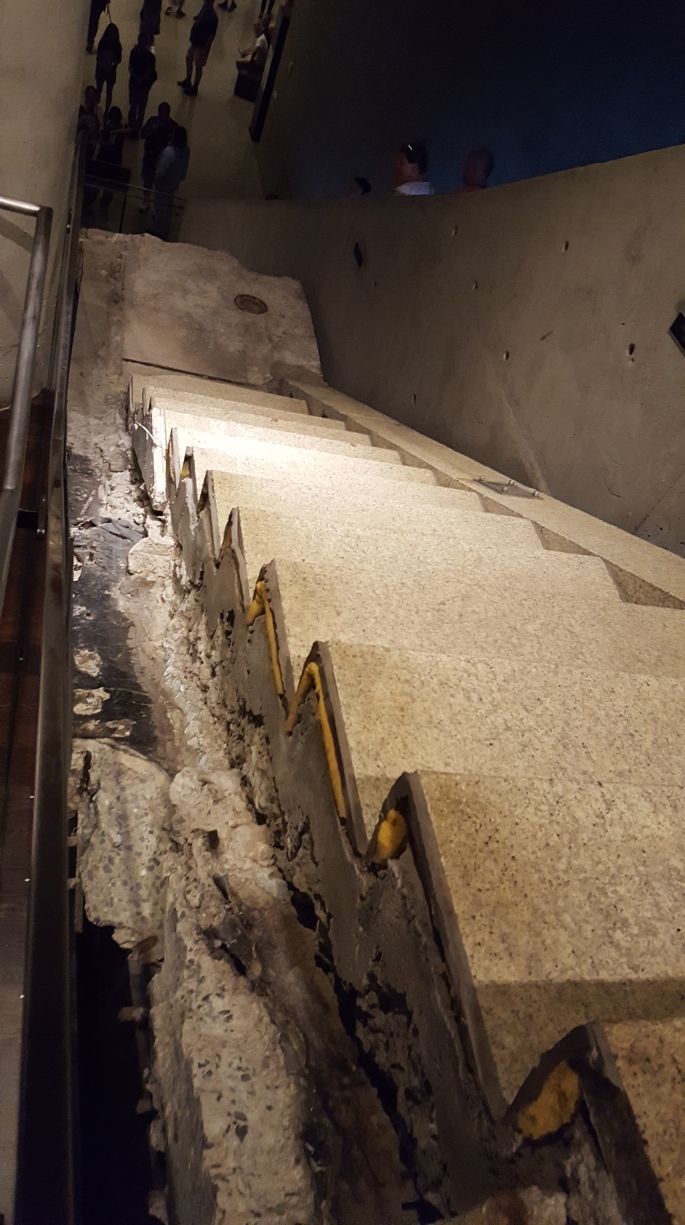 The Vesey Street stairs, are also known as the “Survivors’ Stairs”.
Over 15,000 people made it to safety on this path.
During the attacks of September 11, 2001, the stairway became a vital safety route for many of the survivors. The stairs were one of very few exit areas which had overhead covering, protecting the lucky people who actually made it out from falling debris. Many people made it out but were killed by the falling debris.
The stairs were mostly intact immediately after 9/11, but they were significantly damaged during the nine-month recovery period. The stairway is also the sole vestige above ground of the World Trade Center. 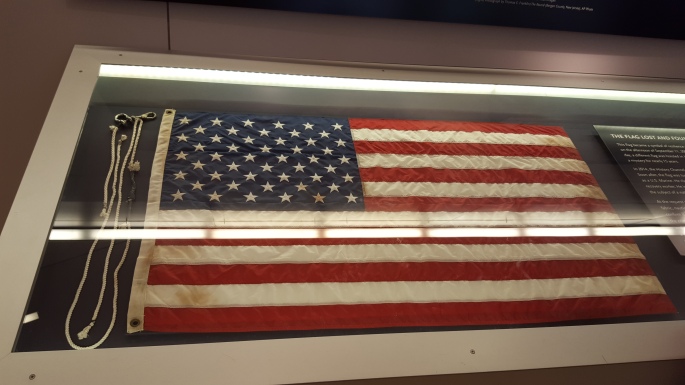 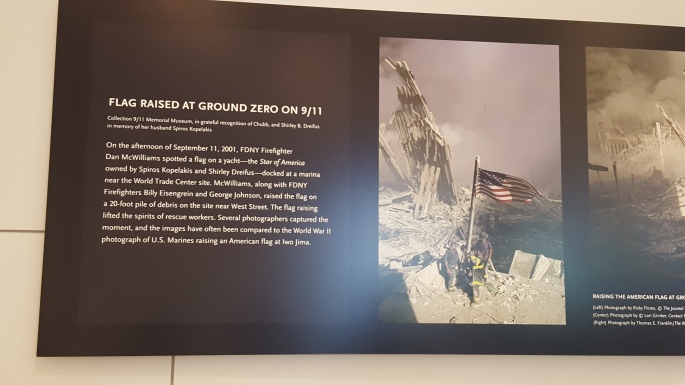 The tour ended with a walk through a room which held photos & family mementos of each victim. 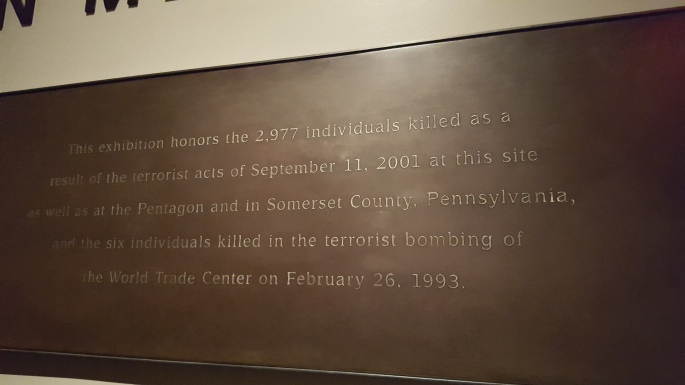 After the Museum, we walked outside to The Memorial Plaza.
The Memorial Plaza is an 8-acre park composed of nearly 400 white oak trees, and the largest manmade waterfalls in the United States. Set within the footprints of the original Twin Towers, each pool is approximately 1-acre in size. The names of every person who died in the terror attacks of February 26, 1993 & September 11, 2001 are honored in bronze around the twin Memorial pools.
A couple photos are shown below, but the video shows it better
Video = https://youtu.be/TXutNm9mB5A 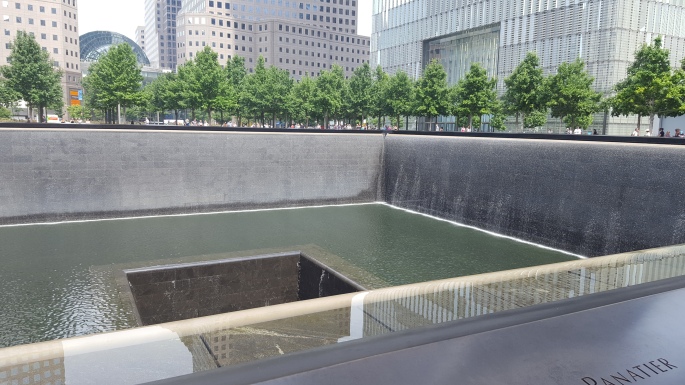 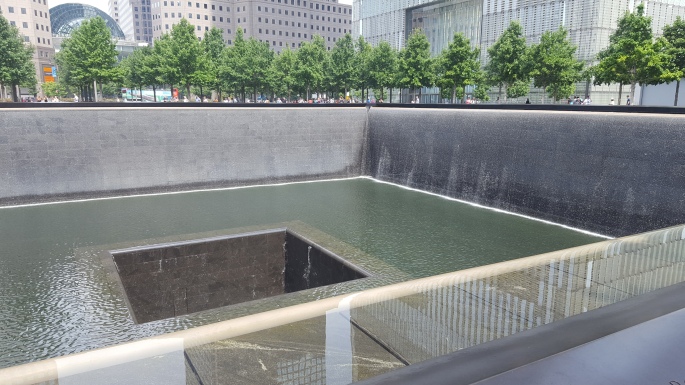 It was quite the memorable day, maybe the most memorable of The Loop.