Aug 6 – Mon
Today was a special day that we have been waiting for during the entire loop, with a bit of both anxiety & excitement.

It was the day for The Big Chute Railway Lock !

We had also anticipated today to be a very hard day.
We only had 42 miles from Orillia to Port Severn Ontario, but the day would also entail going thru 3 locks, with anticipation of The Big Chute creating the most anxiety.

We also purposely planned to do The Big Chute on a weekday, avoiding the boat traffic & long waiting lines that we had heard about at The Big Chute during weekends. Many local Canadians transit this lock coming to/from Georgian Bay for weekend getaways.

The flaw in our planning strategy was not remembering that today, Monday Aug 6th, was a Holiday in Canada eh – It is called the “August Holiday”, “Civic Holiday”, “Provincial Day” or other local names, such as Terry Fox Day in Manitoba.

So we started the day expecting a very long travel day with 42 miles, 3 Locks, The Big Chute, and a Canadian Holiday.

We departed Orillia about 7:45am, attempting to get to the first Swing Bridge & Lock-#42 promptly by 9am.
All of the Bridges & Locks on the Trent Severn Waterway open at 9am every day.
We were traveling with the same new friends we met about a week ago – Gypsea(Mike/Patsy) from Arizona & Awelon-Y-Mor (Neil’s/Doris) from Toronto. 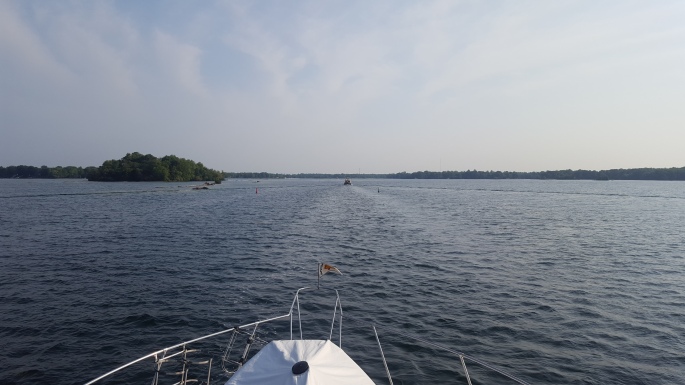 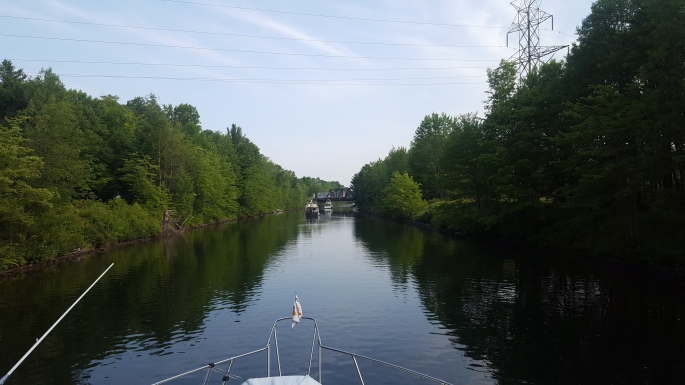 While we were waiting for the train to pass, we were joined by 2 other large vessels (unknown boats, non-Loopers).
After the Swing Bridge opened, all 5 boats proceeded to Lock #42.
It was quite interesting cramming 5 large boats, all over 40 feet + one over 50 feet, into one locking chamber.
But we did it, all 5 boats in.
The largest 50 footer had to go in the back of the lock, and tie up crossways from east to west wall of the lock (didn’t get photos of him, camera man dropping the ball here). 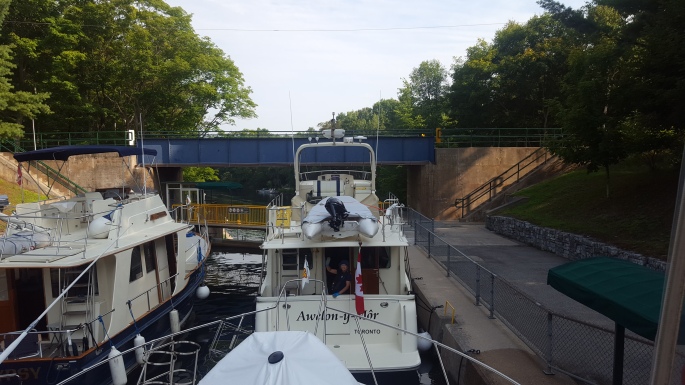 Safely thru the first lock (Lock-#42), all five boats started up the Trent to Lock #43. It was about a 1 hour ride, accompanied by some more really nice homes. We also entered the area known as The Canadian Shield, with lots of rocky shoreline. 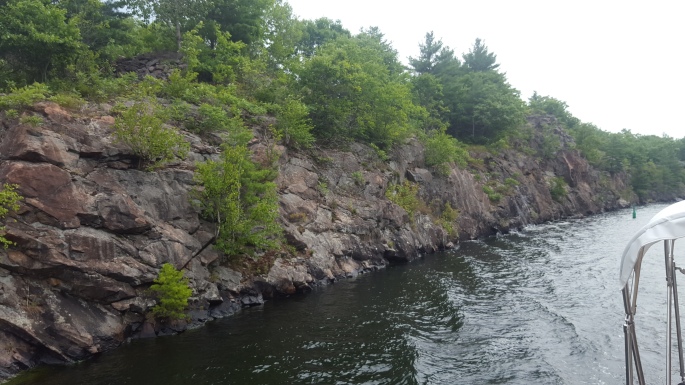 Along the way to Lock #43, the 2 Canadian Motor Yachts decided that we were going too slow for them, and passed us in an open lake area. They were not your normal nice Canadians, they got way too close to us 3 Loopers as they were hammering down.
I called on the radio to my pals ahead of me and said “get ready to get rocked boys, we have some rude boaters next to us kicking up a huge wake”.
Next thing you know they deviated course, and were giving us a much larger spread between their wake & our boats.
I think they need a Power Squadron course in boating etiquette.

Lock #43 was a pretty uneventful lock. It was a large 40 foot drop and the lock operators had the drain on full blast, so it was a very quick ride down 40 feet. In the lock we had our 3 Looper boats & 1 little guy.

So after Lock #43, it was about another 1 hour ride to the main attraction of the day – Lock #44 – The Famed Big Chute Railway Lock.

Mike in the vessel Gypsea was leading the way into the lock staging area, Neils in the vessel Awelon-Y-Mor was second, and Gettin’ Looped was riding sweep.

As we approached the lock, Mike & Neils pulled off to the RHS to tie up to a seawall holding/viewing area.
The area was not that big, and there was not enough room for 3 – 40 foot boats, so I deviated to the LHS seawall where there was a long “Blue Wall” waiting line for the lock.

Holy smokes, it was Go-Time !
We hovered for about 5 minutes while boat #1 & #2 entered the railcar lock, then we proceeded in – OMG here we go !
The anticipation was excruciating.
Our hearts were palpitating.

It may have been the easiest lock that we have been through, all we had to do was drive in !

Come for a Video Ride, or just look at the photos.
(during the video you will hear me talking to Jonell over the headphones, ie – a one way conversation because she was down below).
Video # 2 is the best one
Video #1 = https://youtu.be/4P1vFhbK0bA
Video #2 = https://youtu.be/a5aMeC3z_aU 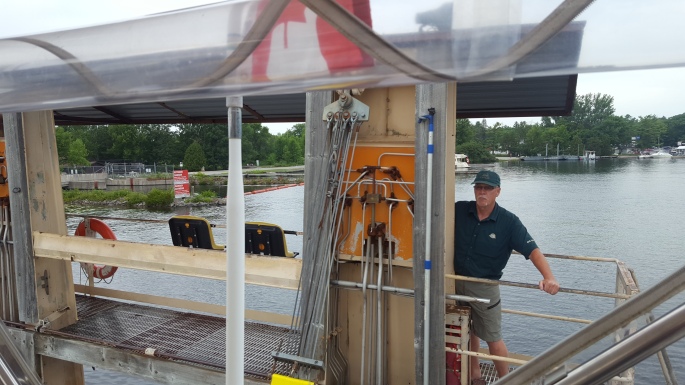 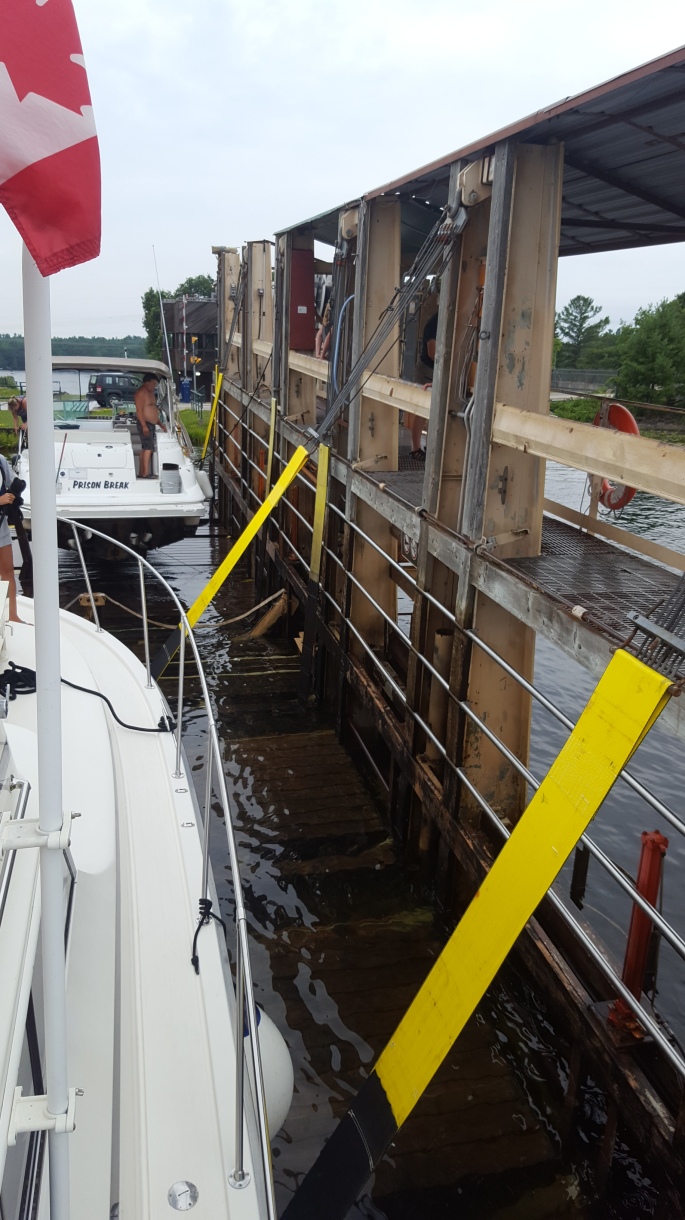 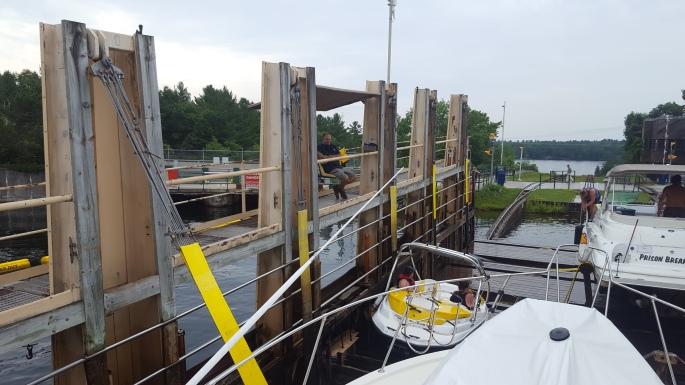 On the exit side of the lock there was a large floating dock.
We pulled over, tied up, and waited for Gypsea & Awelon-Y-Mor to come thru the lock.
We took some video and still photos of their boats exiting the lock.
Video = https://youtu.be/3QuAoACxVZo 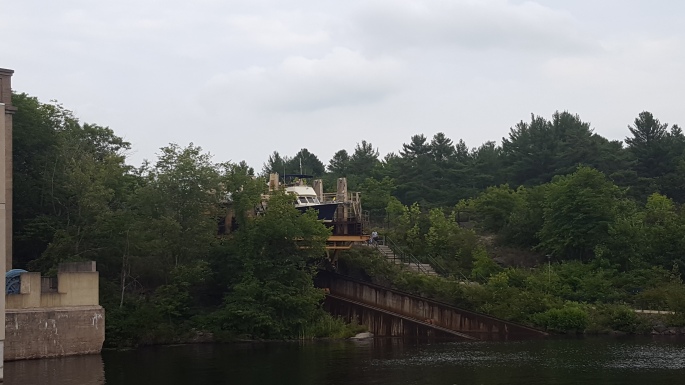 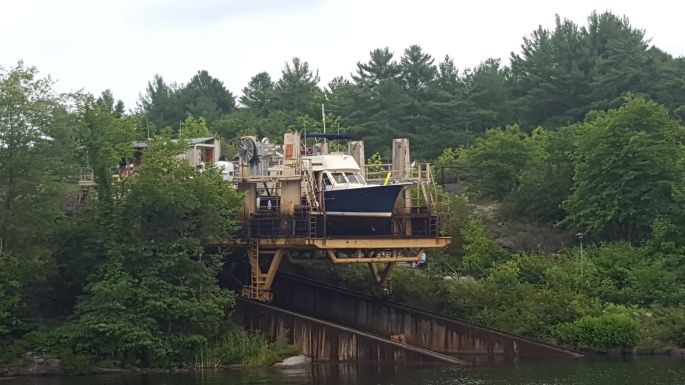 So we are now done with the locks for the day, done with The Big Chute, and now we can relax right ?
Not so fast.
After you exit The Big Chute, you have one more little challenge – The Little Chute !
It is basically a tight corner, with jagged rocks & a high current exit from the Big Chute, complete with warning signs.
It also, was no big deal. 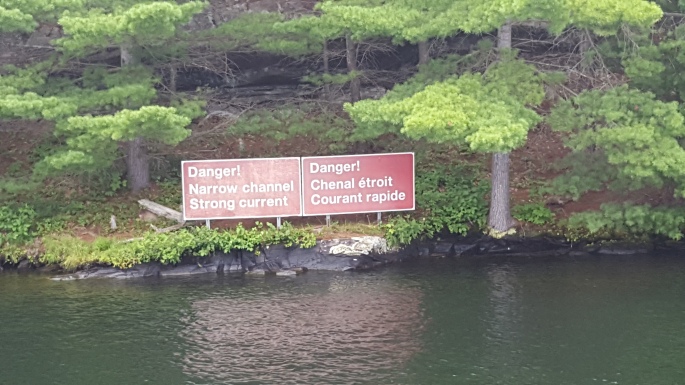 We arrived at the Starport Marina in Port Severn about 4pm.
It was an exciting blast of a day !

At the Starport Marina, we got fuel, got a pump out, pulled over to our slip, & cracked open the ceremonial “welcome to port arrival drinks” – Well deserved today.

Starport seems to be a nice marina.
We didn’t venture out, we stayed in and had celebration Hot Dogs for dinner.
We have another early day tomorrow, with one last lock & 110 miles from Port Severn to Tobermory Ontario, our first adventure into Georgian Bay.

That’s all folks, hope you enjoyed it.