Boring Post – Pass on it if you are busy !

Welcome back to the USA !
After 29 wonderful days in Canada, it was time to start heading back home.
We left Meldrum Bay and headed another 50 miles east to Drummond Island Michigan.

There are basically 2 main Customs locations in The North Channel to re-enter the United States; the Drummond Island Yacht Haven & the DeTour Village Marina.

We thought that Drummond had an actual customs office at the Yacht Haven Marina, so we chose that marina.

Upon arrival we discovered that there is no longer an office with a CBP (Customs Border Patrol) officer, it is now an automated IPAD/Video Conference check-in.

We arrived at The Drummond Island Yacht Haven about noon on Tuesday, after an early start to beat the forecasted high winds coming later in the day.

After arrival, we topped off the fuel for our planned crossing over Lake Huron on Thursday.
BTW, the total fuel balance for the trip is now = $20,749

After arrival, fuel, and check in to the marina, we gathered our trip information and passports and went to the Customs Video Chat Room.

For some reason, I always seem to have a bit of anxiety checking back into my own country, maybe its some of the stories that I have heard from other Loopers about being hassled more coming back to the USA, vs entering Canada. 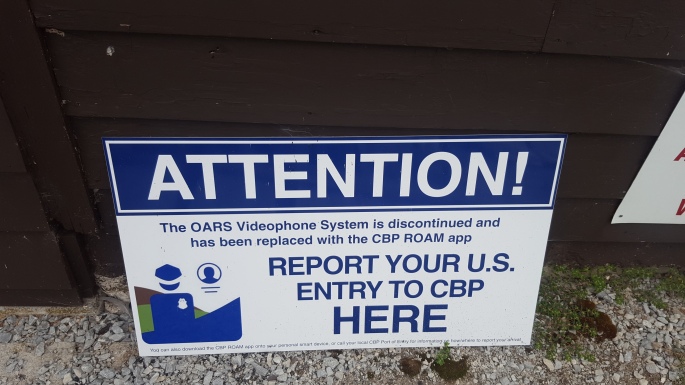 Our Check-in was a bit time-consuming, but relatively hassle free.
In the customs check-in room, you have to fill out a form on an IPAD with the usual stuff ; your boat info, # days in Canada, declarations of stuff back into the USA, passport & DOB information.

It’s not a Nexus Card, not an I68, but simply a sticker that you pay $28 for the right to cross the waterway border (not the same MC 4744 LF registration sticker on the hull that we already paid for when we registered the boat with the state of Michigan).
Can you say “money grab”.

While we were filling out the IPAD questions, we asked the girls in the marina office about the User Decal Number. They said to put “Applied For” in the IPAD box, and get it after the video call with Customs.
We followed their advice.

After completing the form, we hit the “SEND” button.
The IPAD said “please stand by and wait for the video chat with the CBP officer”.
We waited about 20 minutes with no response.
Jonell saw a note advising “if wait time exceeds 15 minutes, call the Sault St Marie Office”.

So we did call the Sault St Marie office, and spoke to a male CBP officer – he said “ok please stand by”.
About 3 minutes later, a female CBP officer activated the Video Call.

She was very nice, apologized for the wait, and began the process.
It was all the normal questions like “are you bringing back any fruits or vegetables”.
She asked us to hold our passports to the screen.
Within 5 minutes, the interview was complete.

The entire process to check back into the USA took about 25 minutes, not a big deal.
But the process of entering into Canada took about 5 minutes over the phone with a human on the other end of the call.

Tuesday night, we went to a Mexican place called Esther’s for dinner, it was Tuesday Taco night – $2.00 Tacos.

The marina has their own fleet of rental cars because there is no UBER or Taxi service for the limited population on the island.

They basically charge $12 per use for a couple hours of usage into town and back for groceries, dinner, etc.

A pretty good deal considering that we normally pay $10 one way for an UBER ride into town to do the same stuff. 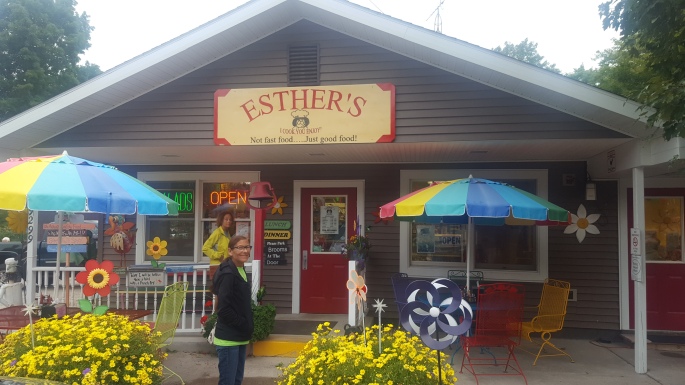 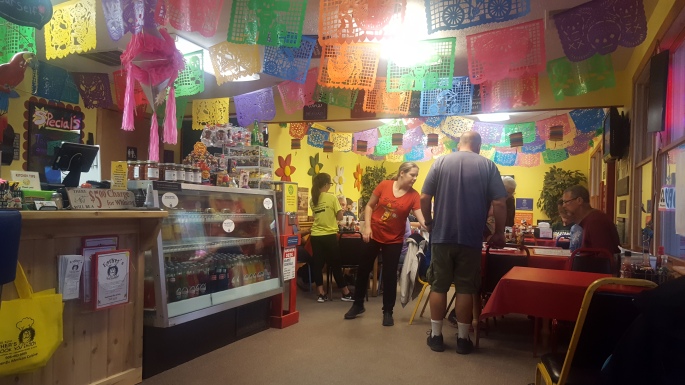 That was about it for Tuesday Aug 21st.
We watched TV, Hulu is now working again back in the USA.

Winds of 35-40mph rocked the boat all Tuesday night.
I swear that while sleeping, I felt like the bed was moving up/down a foot in height ?
This in spite of the fact that The Drummond Yacht Haven has a very robust seawall.

We would have went to our next stop of Presque Isle Michigan (just north of Alpena) today, but the Lake Huron waves are forecasted to be 5-6 feet, no thanks !

The wave forecast for tomorrow (Thursday Aug 23) is about 2 feet.

We spent most of the day doing busy work – maintenance, laundry, cleaning, and blogging.

About 4pm I went to reserve our car for dinner.
Tonight we were assigned the GMC Suburban, with 189,000 miles.
Note = both cars we drove did seem in good operating condition.

We went to dinner at The Northwood Restaurant & Bar.
It was just a northern Michigan hole-in-the-wall bar.
I had the hot beef sandwich & mashed potatoes, it was Great.
Nellie said the same about her fried chicken.
Canada is a very pretty country, but it was good to get back to Northern Michigan Meat & Potatoes.

That’s it from Drummond Island.

Next Stop
Presque Isle Michigan & The State Harbor.
It will be the official “Crossing our Wake” ceremony (more on that later) this week.