Hey Blog Followers,
Since Monday, we have been in Counce Tennessee on the southern border of Tennessee, near the Mississippi/Alabama border. We are currently at a place called Grand Harbor Condominiums & Marina.

Our trip on Monday October 9th began with some thick fog. We took the initial ride slow until the fog burned off.

After the fog burned off, and while under way down the Tennessee river, we again found some beautiful homes on pristine pieces of land.

The travel day consisted of about 60 miles & 2 Locks.
1st mate Nellie is Gettin’ pretty good at her job tying up in the lock.

We arrived at Grand Harbor Condominiums & Marina on Pickwick Lake about 5pm. We were met by new harbor master Neelie Potts (not Nellie). Grand Harbor is a large complex with ; 325 slips, Condos, Tennis Courts, Pool, Fitness Center, & Cable TV. Pickwick Lake is a small lake near the intersection of the Tennessee river & Tenn-Tom Waterway.

After a long tiring day, we were both very tired, and there are no restaurants directly on site at the marina. Nice guy Mike gave Nellie the night off and made an exotic dinner for two on Monday night. 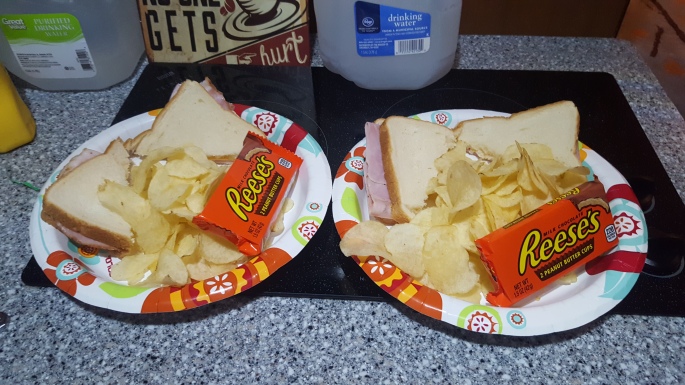 On Tuesday we caught up on bills, errands, cleaning, and went to dinner with ole pals “Odyssey” (Bud/Sue), and new Looper pal John from “Gump Stump”.
All of these folks are very interesting people to talk with.

Bud/Sue from vessel “Odyssey”, have traveled to places like Greece, Etheopia, and have spent 2 weeks in the jungles of South Africa.
John from vessel “Gump Stump”, has went Peacock Bass fishing on the Amazon river.
John is currently doing the Loop single-handed, but will meet family in Florida.
The name of his boat “Gump Stump” originates from the name of a fishing/hunting club he is in with 7 other longtime buddies in Florida.

We had dinner at a place called “Freddy T’s” Restaurant & Beach Club, a tiki-themed restaurant & bar featuring a menu of steak, pasta, seafood, and large wine cellar. It is a large complex with lots of flat screens, TVs in the floor, live bands, dance floor, and rooftop bar. 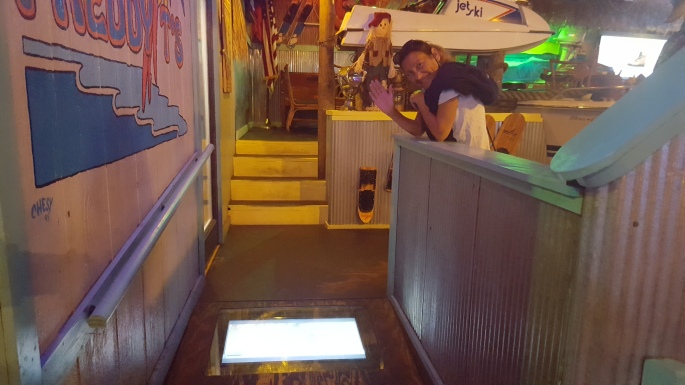 On Wed/Thu we did something that I have always wanted to do in my life, we went to the home of Elvis Presley @ Graceland , located in Memphis Tennessee.
To get to Memphis, we rented a car from Enterprise about 30-40 minutes away from the marina.
Recently new Gold Loopers from Memphis, “Robin’s Nest” (Eric/Robin Barnhart), gave us a ride from Counce to Corinth to get the rental car. Robin also gave us some great tips on local stuff to do in Memphis.
When we arrived in Memphis, we checked in at the “Guesthouse at Graceland” a new 450 room complex just built last year in 2016. The place is beautiful and still smells new. 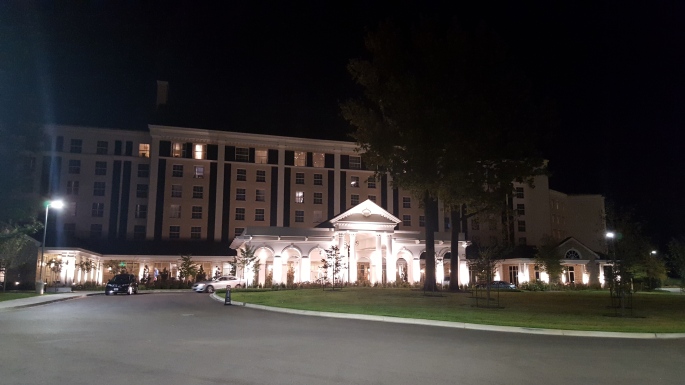 After checking in, we hurriedly changed cloths and went for drinks at a place in downtown Memphis called the Madison Hotel. Robin Barnhart had told us that the rooftop bar at the Madison was a “must-see”. She was correct, the view was spectacular, and the locals were very friendly, inviting us to share the fire pit on a chilly Memphis night. The river below is the Mississippi, the route you would take if you wanted to enter the Gulf of Mexico in New Orleans. Recall that Gettin’ Looped (& most Loopers) took the Ole Miss – the Ohio river – the Tennessee river – and soon the Tenn-Tom Waterway, to allow our entry into the Gulf at Mobile Alabama. 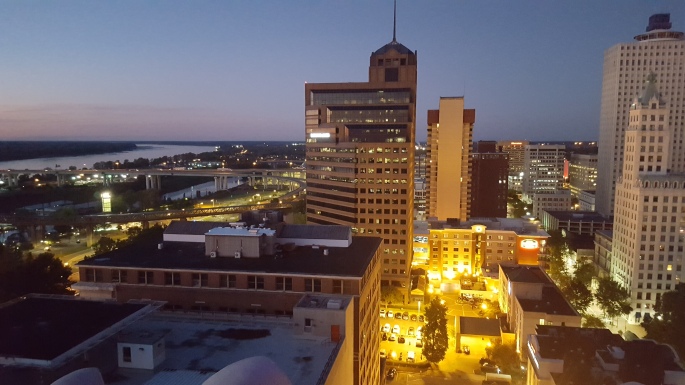 After pre-game drinks at The Madison, we went to dinner at a place called “The Rendezvous”, also located in downtown Memphis.
We were actually able to walk from The Madison Hotel to The Rendezvous.

The Rendezvous is a landmark BBQ restaurant in Memphis opened in 1948.
Memphis claims to be the pork barbecue mecca of the world, and for over 60 years, the Vergos family has been serving their signature dry rub ribs in a basement through a downtown alley across from the Peabody Hotel. The stories also say that you have to be invited to work at the Rendezvous by an active worker, it is apparently a difficult job to come by. 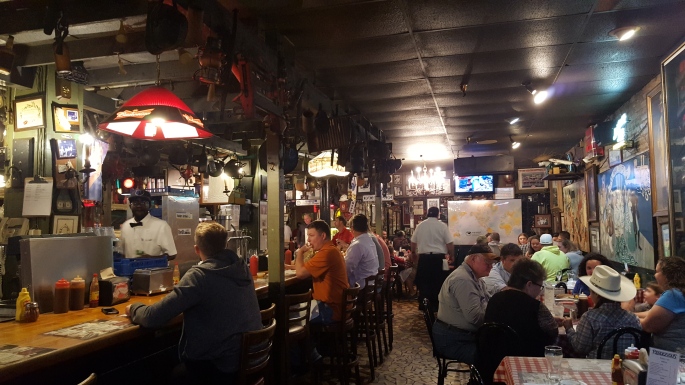 After dinner we returned to the beautiful Guesthouse at Graceland and watched a very good trio of young fellas play a bunch of old 50,60’s favorites in the lobby.

After a long day/night on Wednesday, we awoke early for our 9:15 am tour appointment at Graceland.

Graceland was built-in 1939, and Elvis purchased it in 1957.
Graceland was opened to the public in 1982.
Graceland is on a 13.8-acre estate in Memphis Tennessee.
The site was listed in the National Register of Historic Places on November 7, 1991, and declared a National Historic Landmark on March 27, 2006.
Graceland is the second most-visited house in America with over 650,000 visitors a year, second only to the White House. 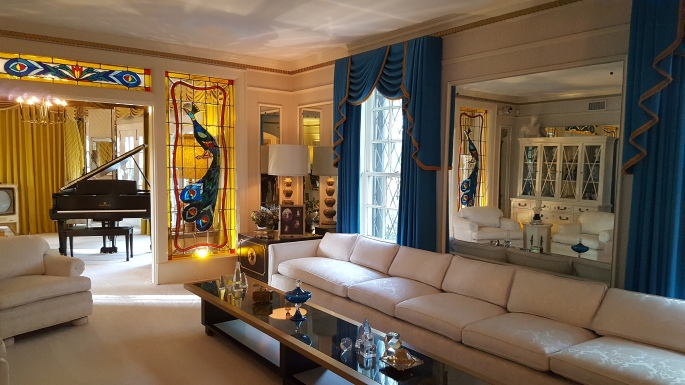 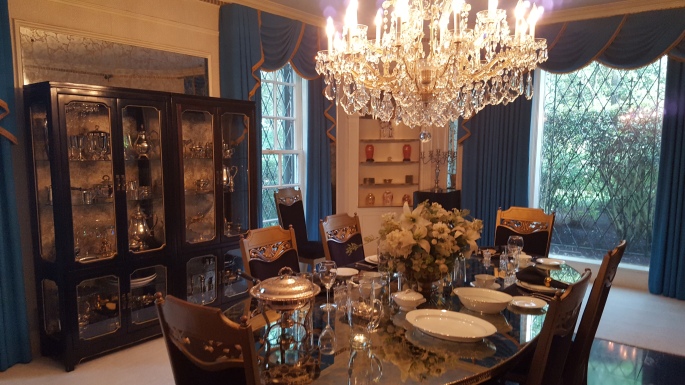 After the Graceland Tour, we also visited several Elvis memorabilia museums show-casing his ; cars, motor cycles, show outfits, & tributes from other musicians.
But the most impressive display was his wall of Gold/Platinum Records.
I was also surprised to learn that Elvis had made 31 movies during his acting career, there was a complete building dedicated to his acting career.

If a few weeks, we also plan to visit the childhood home of Elvis in Tupelo Mississippi. Interesting facts – my dads Aunt Jerry babysat for the king when he was a child in Tupelo. My dad’s uncle, who lived most of his life in Tupelo, was named Elvis Murphree.