It has been a while now since our last update, some of you have checked in to see if everything was ok.
Yes, all is good on the SS Gettin’ Looped !
Jonell & I are both mostly over our Colds/Flu & feeling much better.
Over the last week we have had special visitors; Rick/Linda Spragg & Jerry/Lori Scheller.

I met Rick in 1982 at American Motors. He was a technician in the NVH Lab when I started my career. Rick took me under his wing and taught me everything he knew, and ultimately played a large role in the assignment I had in Paris France in 1984 at the Renault Motor Company. We met Linda in about 1983 and she was also instrumental in coordinating a farewell party & welcome home party when we went to France.

We met Jerry/Lori Scheller thru the Spraggs in 2012, and have also become very good friends with them.  We all spend a lot of time with both the Spraggs & Schellers & Klines up at Rick/Linda’s cottage at Secord Lake in Michigan, at Boat Shows, and general socializing. We ALWAYS have a great fun filled care-free time, everytime we are around them.

Jerry & Lori had to go back to that Work thing, and left on Wednesday.
Rick & Linda just retired 2 weeks ago at the end of January, and will spend the remainder of February with us as we work our way up the Keys. We will drop them somewhere near Miami around March 1st.

We also did some cool stuff that we had not yet done with the previous visitors. The most interesting new events were ;
1. Lunch @ Latitudes Restaurant on Sunset Island
2. We drove to Islamorada & Lori achieved a bucket list goal of swimming with a Dolphin.
3. Jonell & I had an awesome dinner with several of our Looper pals, at a 60th birthday party for Greg Boyer from the vessel Thistle.
4. We went to a comedy show at a place called Bottlecaps.
5. The Aqua Drag Show
6. General having fun photos

1. Lunch at Latitudes Restaurant.
Latitudes Restaurant is on the island of Sunset Key.
Sunset Key is a 27-acre residential neighborhood and resort island located about 500 yards (460 m) off the coast of Key West. The island is privately held among its residents, one of which is OPAL Properties which operates a small number of guest cottages. The island is accessible only by a shuttle boat that runs from the Margaritaville Marina out to the island. The island consists of a total of 48 single-family homes and 21 vacant lots, each of which are valued at over $1.5 million.
The entire day was incredible ; the boat ride to the island, the amazing views, the food, and the foo-foo drinks. 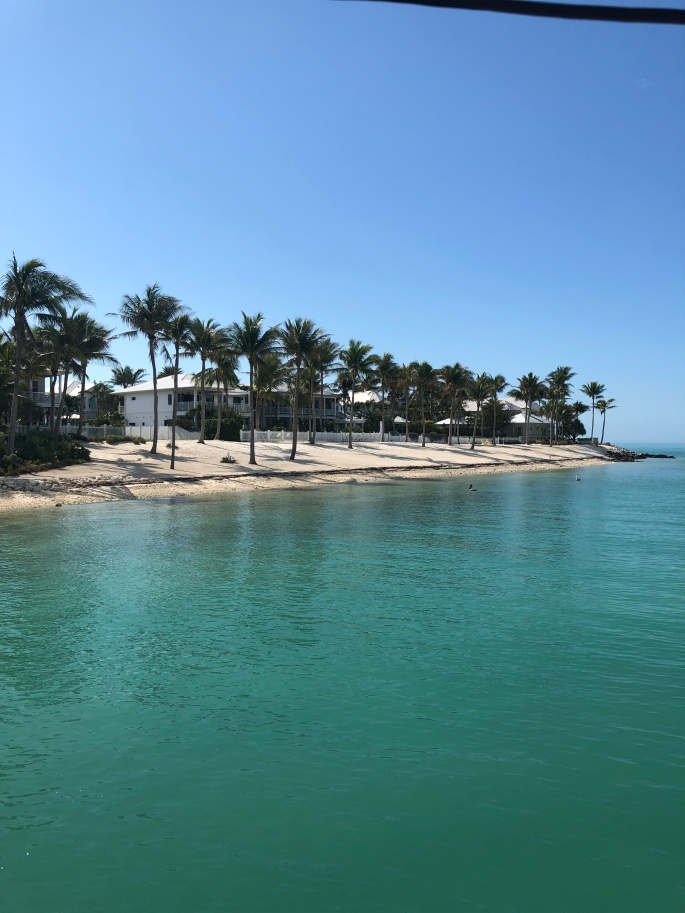 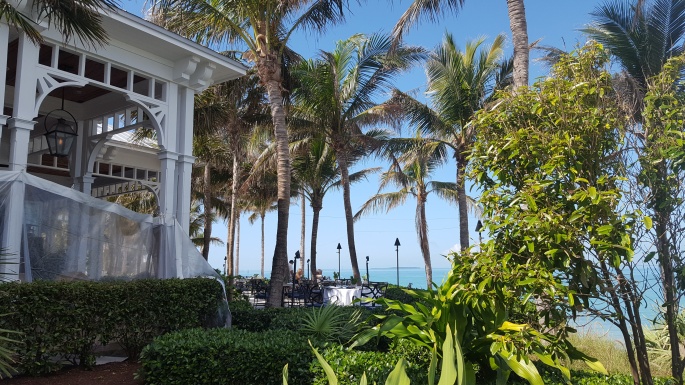 3. Jonell & I had an awesome dinner with several of our Looper pals, at a 60th birthday party for Greg Boyer from the vessel Thistle.
On Monday night, we had plans made weeks ago with the Loopers, and had to let the Spraggs/Schellers explore Key West on their own. I think they enjoyed some time without the tour director.
Mike & Jonell attended fellow Looper Greg Boyer’s 60th birthday.
Greg’s wife & social director, Reenie, coordinated a birthday dinner at a place called The Key West Isle Cook. The setting was a working kitchen , where we all watched and interacted with the Chef Martha Hubbard as she discussed how she was preparing the 5 course meal. Chef Martha Hubbard started her culinary journey in 1986 in Newport Rhode Island. She attended the New England Culinary Institute in 1988 and by 1990, she was cooking at Stars in San Francisco and Mustards in Napa Valley. “The travel bug hit” and Chef Hubbard headed to the Pacific, working first at the Manele Bay Hotel in Hawaii, and then traveling the South Pacific and Asia for a year. By 1994 she settled down in Portland for six years as a sous chef at Payle’s Place, Cafe Azur and Bima. After visiting Key West in November 2000, Chef Hubbard moved here May 2001 where she worked as the opening sous chef at 915 and later as the Chef of the Upperdeck at Louie’s Backyard. In November 2015, Chef Hubbard became the Culinary Curator at Isle Cook Key West. 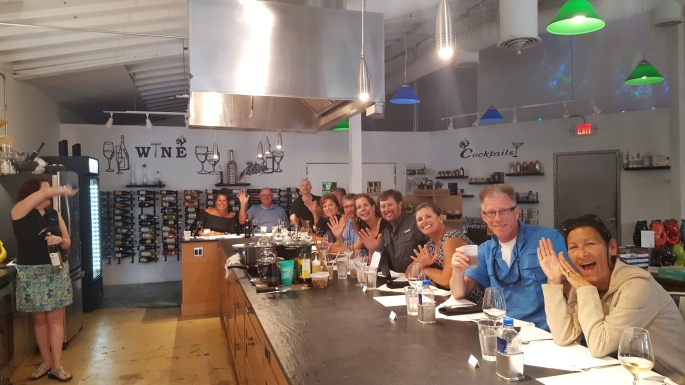 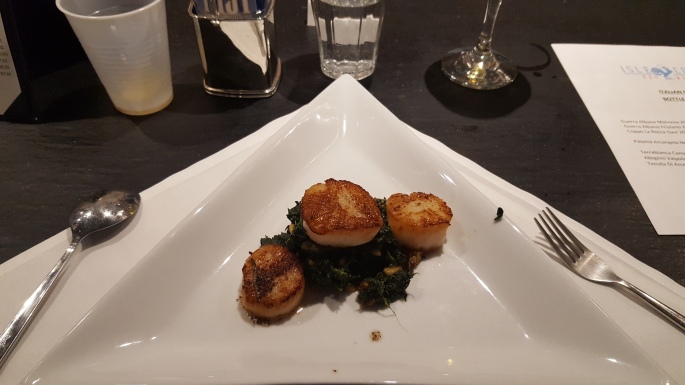 4. Comedy show at a place called Bottlecaps.
The show featured about 5 local key west amateur comedians, and the main liner from Boston.

5. The Drag Club – Aqua (Rick & Jerry wanted to go, not Mike)
Note = Jerry had the cat-bird seat on the end, he got the most attention from the girls/guys, he may have enjoyed it more than Ron Kline ! 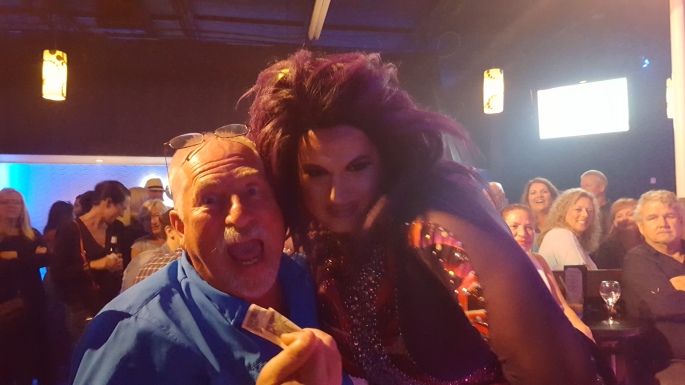 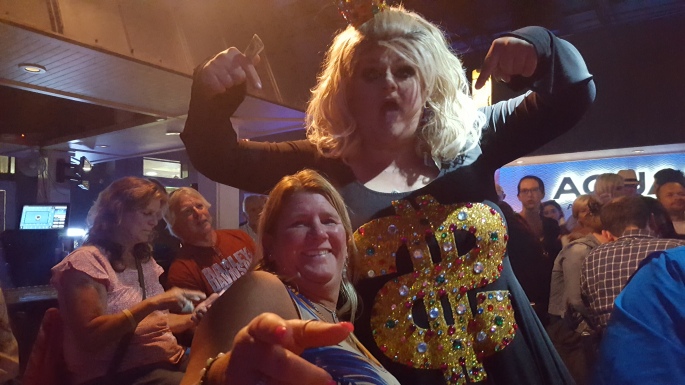 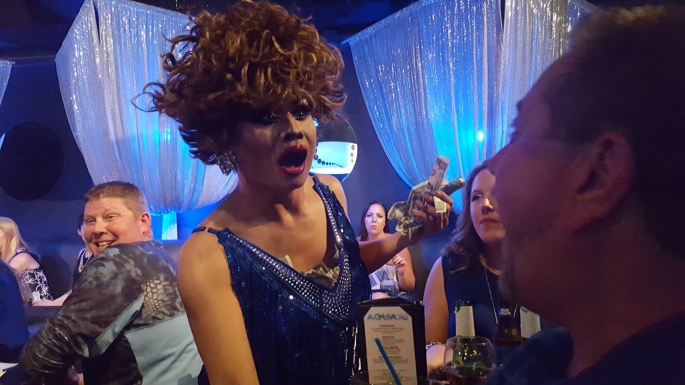 6. The Rest of the story !
The photos below are from places that we have previously shown on the blog, now experienced by the Spraggs & Schellers. Lots of fun times below. 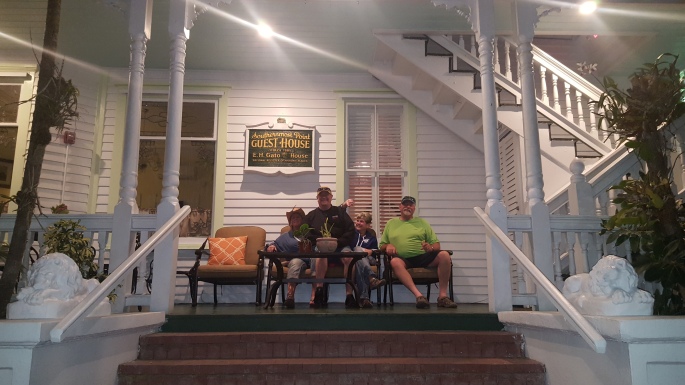 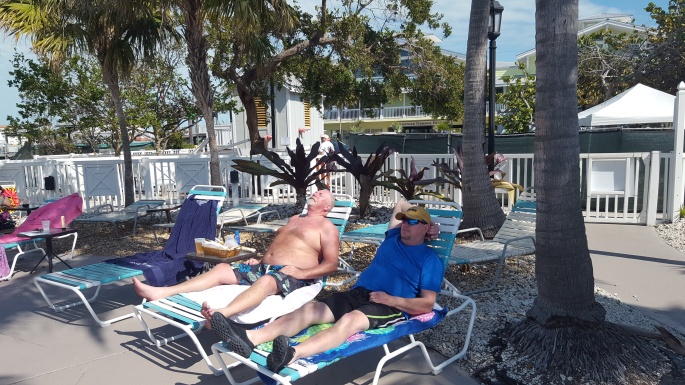 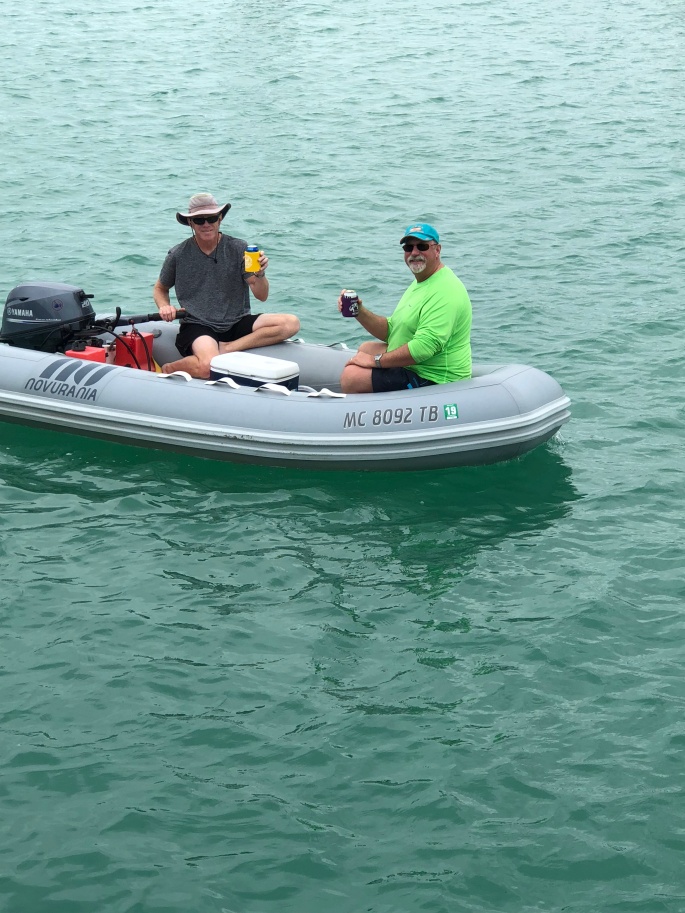 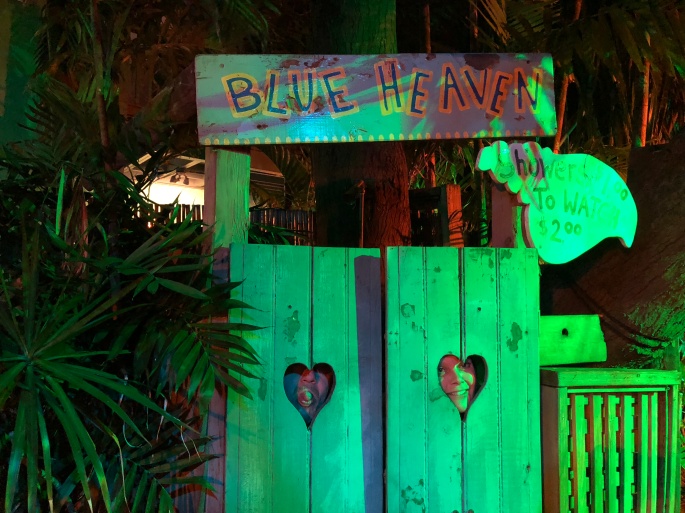 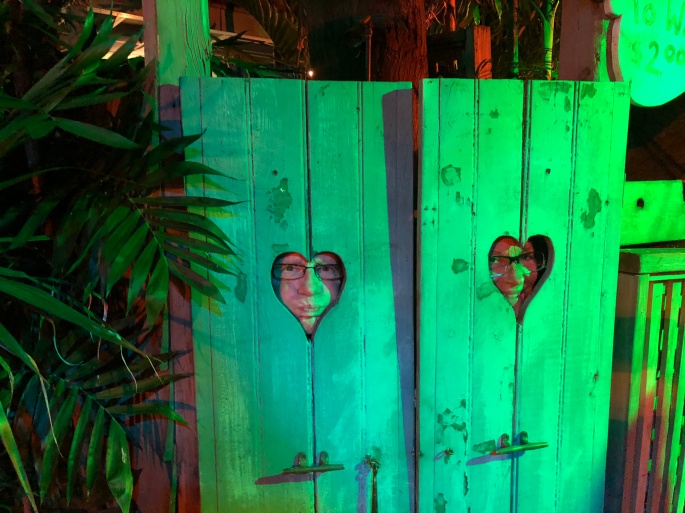 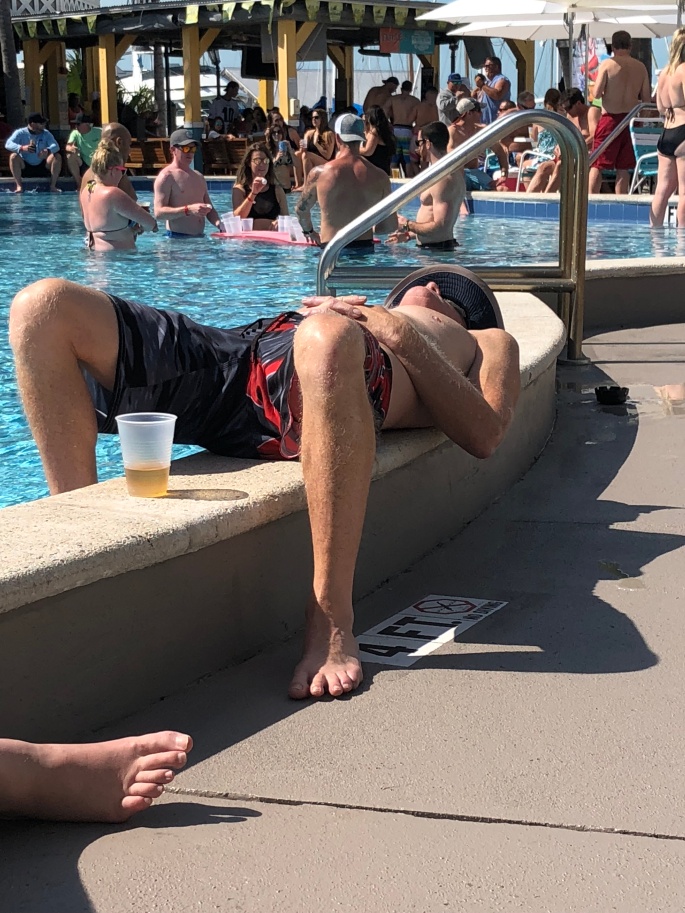 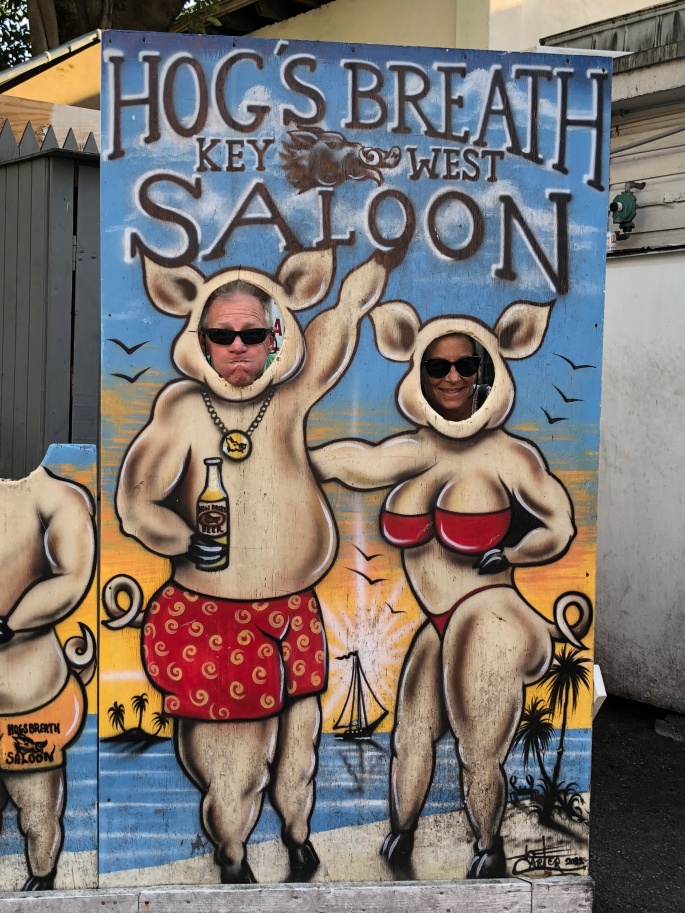 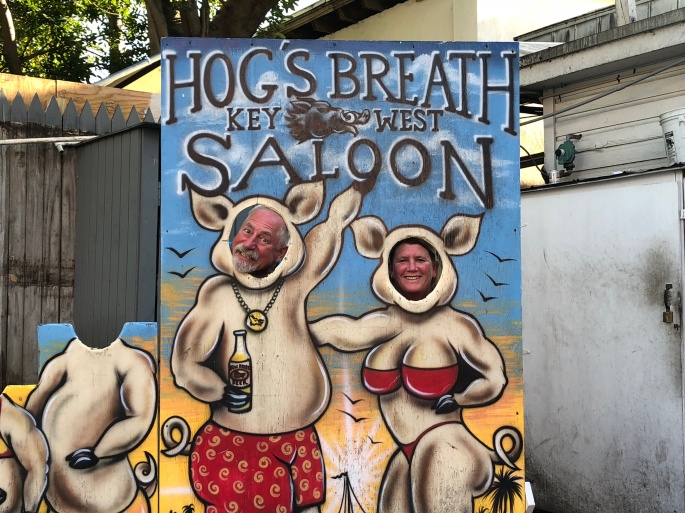 Next Up
We will travel from Key West to Marathon on Monday.
The newly retired Spraggs, will be with us until about March 1st near Miami.