Mar 31 – Sat
On Saturday we moved 32 miles north from Melbourne Florida to Cocoa Village Florida.
It was our test ride for all the mechanical issues discussed in the Melbourne update.
All systems were in ship-shape with a smooth ride, no noises, no vibrations, and cool stuffing box nuts !

We had to delay our departure from Melbourne, waiting for a sailboat to depart our slip in the Cocoa Village Marina. We arrived about 2pm, under windy overcast conditions.

We spent most of Saturday afternoon prepping for visitors – washing the bed sheets, cleaning the boat, and grocery shopping.

Saturday night we ate subs that I had purchased at the Publix grocery, and watched Michigan beat Loyola-Chicago in the Final Four.

Apr 1 – Easter Sunday
On Sunday after morning coffee, we began Easter Sunday with a nice Pump-Out of the toilet heads, emptying them before company arrived.
It was a glorious sunny, calm morning after a windy rocky night.

Our neighbors from Royal Oak Michigan, Al & Roberta, arrived about 1pm.
We have known Roberta since we moved into our current home on Aberdovey, the same year Daniel was born, in 1990 (28 years).
Roberta & Al met about 15 years ago, and Jonell & I attended their marriage ceremony about 10 years ago.

We got Roberta & Al checked into the SS Gettin’ Looped, and settled in for some catchin-up discussion on the aft deck. We had not seen them since we left Michigan last July. They are on their way home to Royal Oak after 3 months in their annual winter retreat of Bradenton Florida. They planned to see us for a few days in Cocoa Village and then visit Roberta’s friend Marilyn in Jacksonville on the way home.

After  a few hours of catchin-up discussions, we cleaned up, and went for a walk around the beautiful Historic Cocoa Village Downtown.
The downtown area in Historic Cocoa Village is very pretty with lots of local mom/pop shops, hidden garden restaurants, and entertainment venues.
Cocoa was founded by fishermen with the first families arriving around 1860. A post office was established at Magnolia Point, and the city’s first commercial building was erected around 1881. It is located along the Indian River, which is part of the Atlantic ICW, and is a few miles from Cape Canaveral & Cocoa Beach. 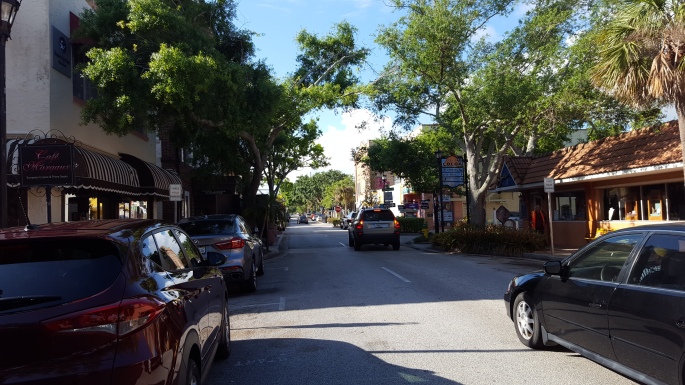 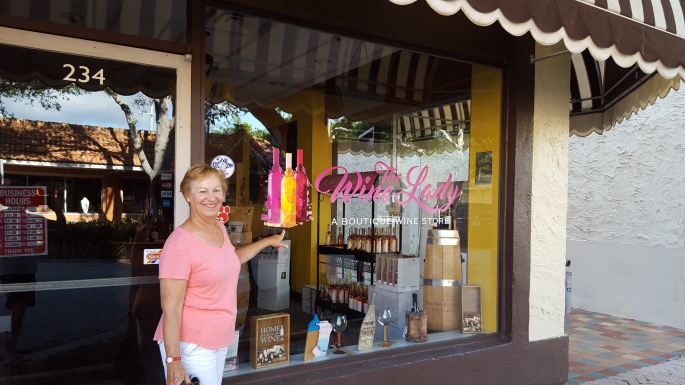 We had Easter dinner at a place called The Tulip.
I had the “World Famous Oven Roasted Duck”
I asked the waitress how/why it was world-famous, she advised that it became famous in the early 80’s when Walter Cronkite frequented The Tulip and raved about the duck. The duck was combined with seasonal apples, raisins, and walnut sauce.
Walter was correct, it was very good , “and that’s the way it is !” 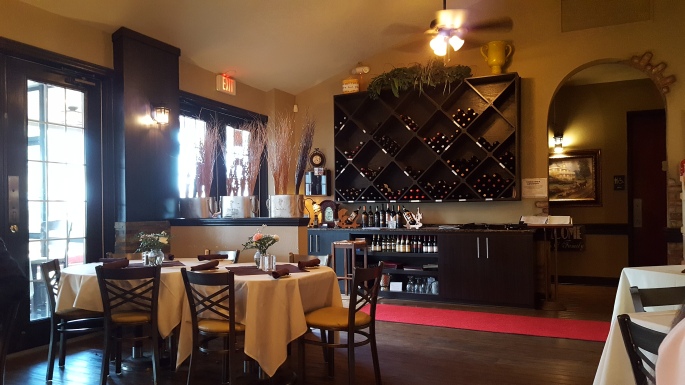 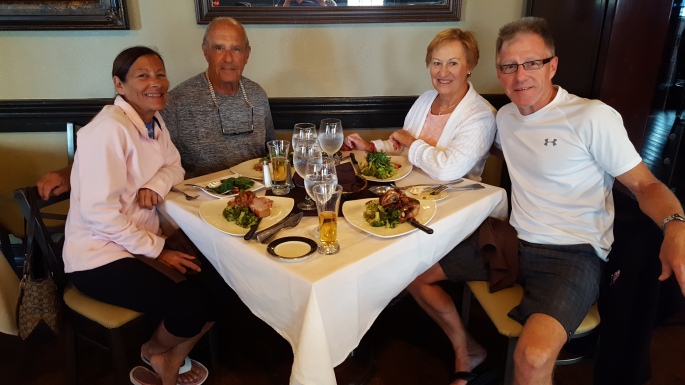 Apr 2 – Monday
Monday was an exciting day, it was both Beach Day & Rocket Day.
We started the day with breakfast at a place called The Wanderlust Cafe, a new recently opened joint, with a very pleasant young owner. 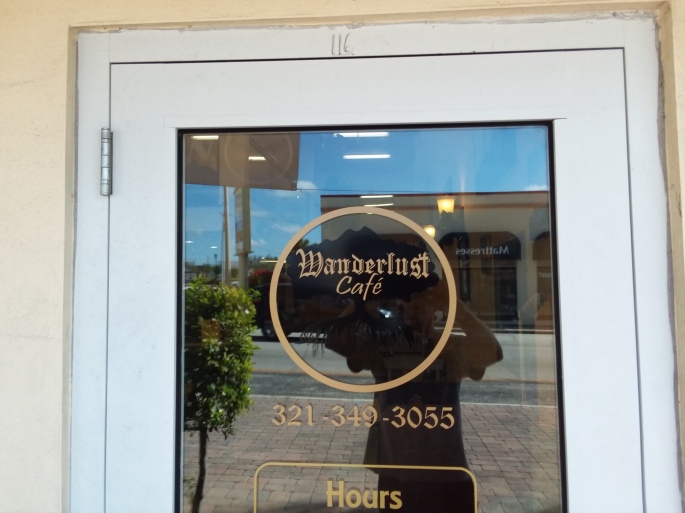 After breakfast, we packed up the cooler, called the Uber, and headed to Cocoa Beach.
Cocoa Beach is about 7 miles from the marina, on the Atlantic Ocean. We camped out just north of the Cocoa Beach Pier, a very active place, and even more active due to the NASA Rocket Launch scheduled for 4:30pm later that day.

We arrived at the beach about 12:30pm.
By 2:30pm, me & Al were fairly bored.
Al wanted to get some apparel at the Ron-Jon’s Surf Shop about 1 mile away, so me & Al went for a long stroll down the beach to Ron-Jon’s.
Along the way we saw many people attempting to surf in a Ron-Jon directed “Surf School”.

A while later, we arrived at Ron-Jon’s.
The place was not like the T-shirt places I had remembered from my younger days in Daytona Beach. The place was a gigantic 2 story building, with everything from; apparel, shoes, surf boards, scuba gear, water skis, bathing suits, etc. 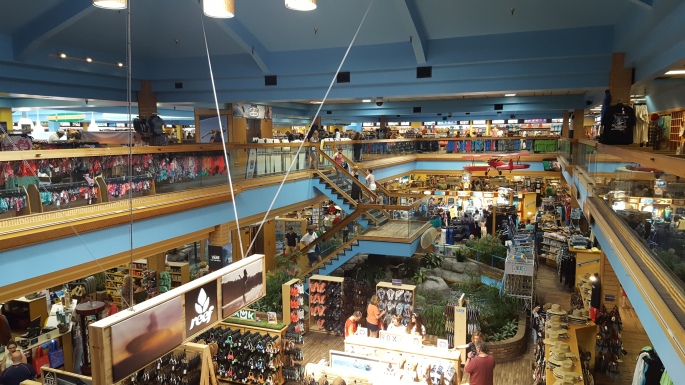 After the long walk to Ron-Jon’s, we caught a break on the way back. To get to Ron-Jon’s after walking the beach for a mile, we had to walk from the beach another 1/8 mile into Cocoa Beach City. We were not looking forward to the long walk back to the girls, but as we were coming out of Ron-Jon’s, I saw a Trolley car coming.
I stopped the trolley and asked the driver if he went to The Cocoa Beach Pier, he replied “yes I do”.
I asked “how much”
He said “It’s free”
I said “Ok, we got a deal” (Looping budget remains intact)
A short while later, we met back up with the girls about 3:30pm.

It was our original plan to leave the beach and watch the rocket launch with the other Loopers on the 2nd story of the marina office, about 10 miles from the launch pad. It was billed by the marina staff as a great location (tables in upper/left corner).

With the launch scheduled for 4:30pm, and since it was already 3:30pm & we were much closer to the launch site at the beach (vs at the marina), we decided to watch the launch from Cocoa Beach.
The launch was a Space X / Falcon 9 Rocket carrying a payload that included Costa Rica’s first satellite. The satellite, which is part of the Irazú project and is a small cube shape, was designed to collect data on the growth of their country’s forest.

The anticipation was excruciating, with the tension building by the minute, crowds lining the Beach & Pier.

I readied my camera, I started to see the rocket take off, I pushed the camera button, and attempted to follow the path of the rocket. It was very difficult to see with the sun immediately behind my phone camera.
Oh-Crap !
As the rocket was decoupling from the payload, I realized that in all the excitement I had not hit the Video Button, I had hit the Photo Button.
I had only taken 1 photo, Crap !
Here it is

Luckily, Nellie to the rescue.
She did not take video, but took a series of still photos. 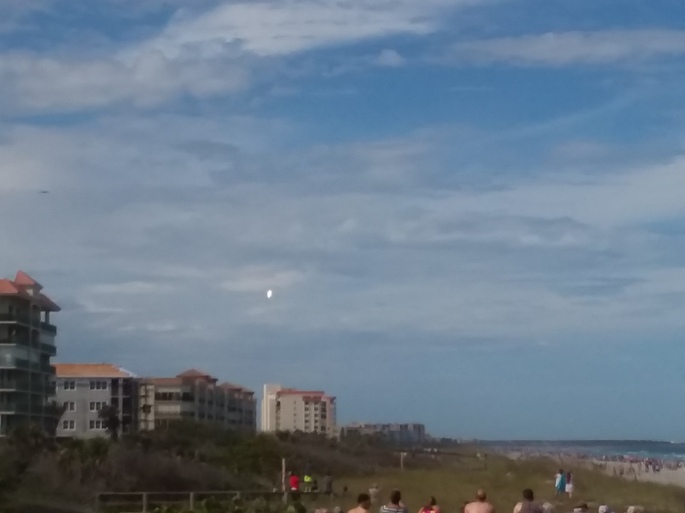 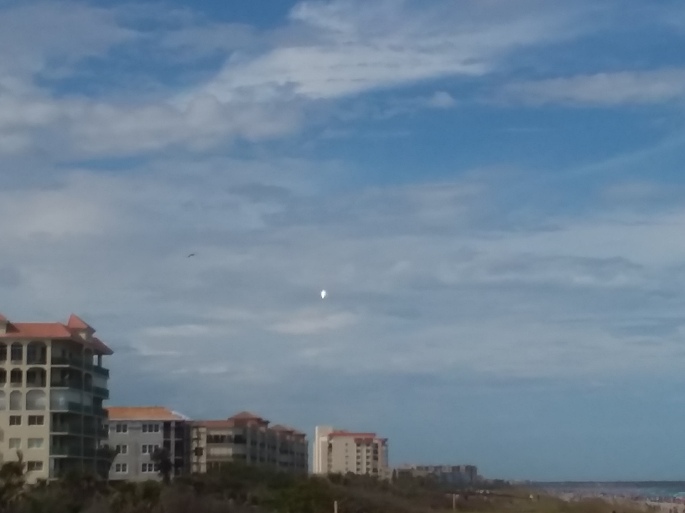 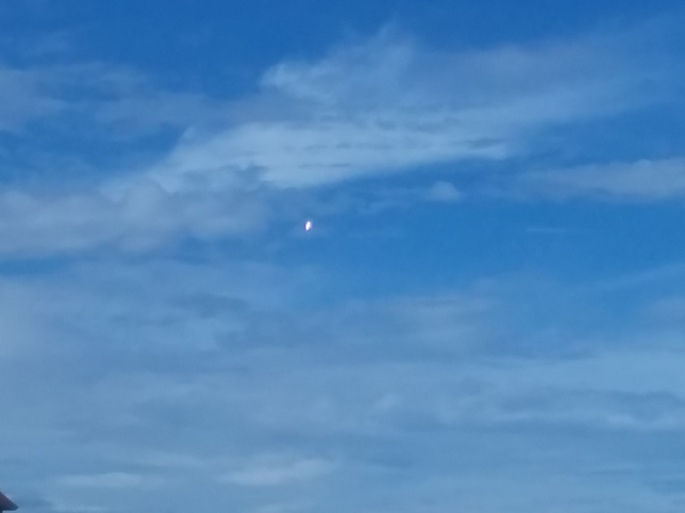 Even at only 3 miles away, the event was somewhat of a let down.
It was not as big, as loud, or as earth-shaking as I had imagined.
I was told by locals that the recent Elon Musk rocket that launched the Tesla into orbit a few months ago, was much more spectacular.
I was also told by our fellow Loopers, that the event was really hard to see at the marina.

After the launch, we waited about an hour for traffic to clear, took the uber home, got cleaned up, and headed out to dinner.
Dinner was at a place called Murdock’s Southern Bistro.
I had meat loaf, smothered in onions & gravy, Al had blackened Cobia, I don’t remember what the girls had.
As we were eating, our very good Looper pals Mike & JoAnne Feeney from Rula Bula walked in about 8pm, returning to Looping after their recent trip home to Wisconsin to do taxes. 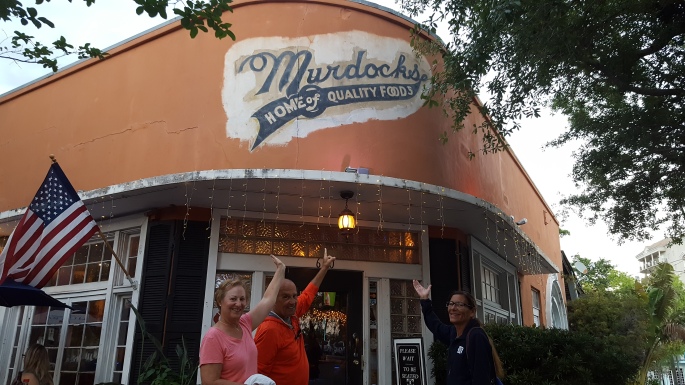 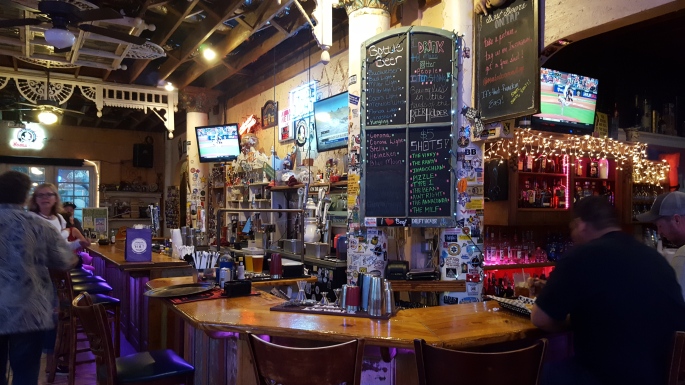 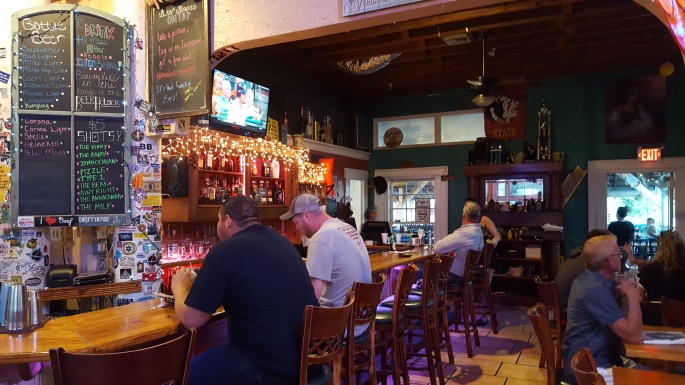 The night ended with TV, and watching a disappointing Michigan Wolverine stomping by the Villanova Wildcats. Never the less, congrat’s to Michigan on a great March Madness run.

Apr 3 – Tue
After a very short 2 days, it was goodbye day for Al & Roberta.
We started the day with some coffee, and sat out on the upper deck of the marina office chatting with the marina staff and other boaters. It was a prestine, very calm, nice sunny start of the day.

We had breakfast about 9:30am at a place called The Ossorio Bakery & Café.

On the way back from breakfast, we passed by and went into the LARGEST HARDWARE store I have ever seen. It was 1 block wide /1 block long / and 2 stories tall. It is known as the S.F. Travis Company.
The history of the store as told by current 4th generation owner Travis “Mac” Osborne is as follows ;  “In 1885, my great-grandfather, Colonel S.F.Travis, who served in the American Civil War, had a sailboat going up and down the rivers, delivering items and taking orders from Jacksonville to Fort Pierce.  In 1892, S.F.Travis purchased an existing store on the river and used it as a warehouse. The building eventually grew into a retail store and the S.F.Travis Company that is there today. “Until 1955, he still ran a barge up and down the river to make deliveries,” says Osborne. “In the old days they would run tabs for customers until the crops came in, then they paid them off. Business was done on a handshake.”
Travis “Mac” Osborne took control of operations in 1983, and is the 4th generation owner. I could see Travis on the stool behind the counter barking out directions to the workers. He sounded like a Mississippi or Alabama good ole boy !
The hardware had everything you could dream of , the most interesting items for me were the huge machinery box wrenches on sale for $1100.00 each

We returned to the boat about 10:30am.
Al & Roberta got packed & said farewell about noon.
It was a very fun 2 days !

Later that night we had dinner with our old Looper Pals Rula Bula & Craic, and new Looper friends Paul & Caryn Frink on the vessel Seeker.
We went to a place called Time-Out Plus, featuring $3 pitchers of Miller Lite ! 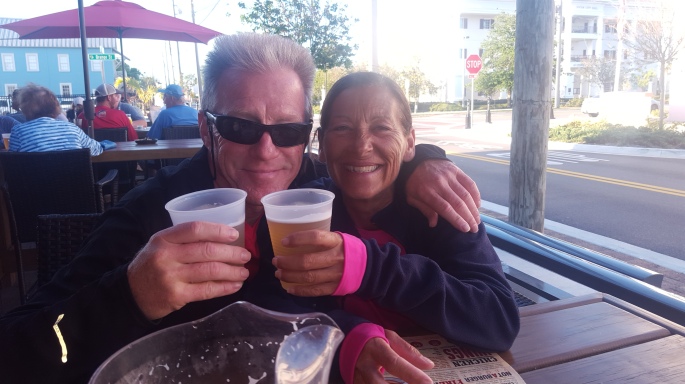 Mar 4 – Wed
Wednesday was a very laid back day.
We did some banking, cleaning, had some drinks on the upper deck of the marina, walked around Cocoa Village, saw an awesome ’68 LeMans convertible, sat in the town park for a while, watched boats come in/out of the launch ramp, had pizza on the upper deck at Ryan’s Pizza & Pub, and watched a beautiful rainbow form while at Ryan’s, after a soft rain.
Not much else to report for Wednesday. 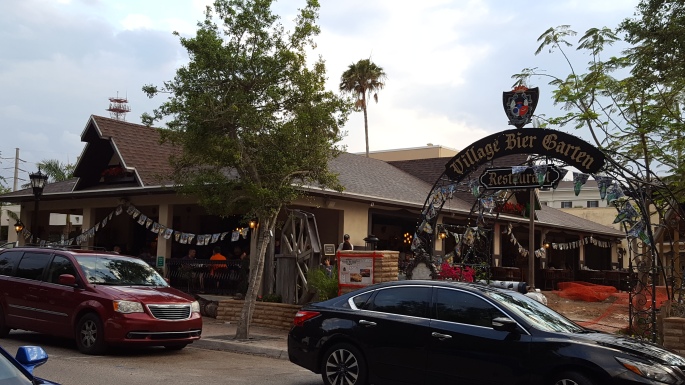 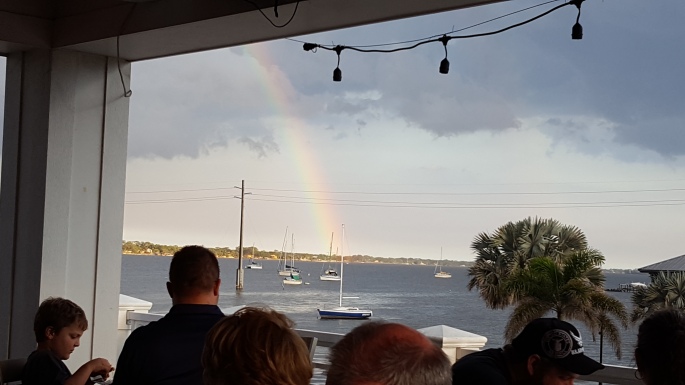 It was a pretty fun, laid back day with Just me & Nellie.

Mar 5 – Thu
After shelling out $30 to Uber just to go to the beach and back (only 8 miles away), we decided to rent a car for the remaining 2 days, because we wanted to go on an Airboat Ride about 25 miles away, which Uber projected at $40 one way.
The Enterprise rental was $95/2 days – and we were Riding in Style – a nice Cadillac CTS ! 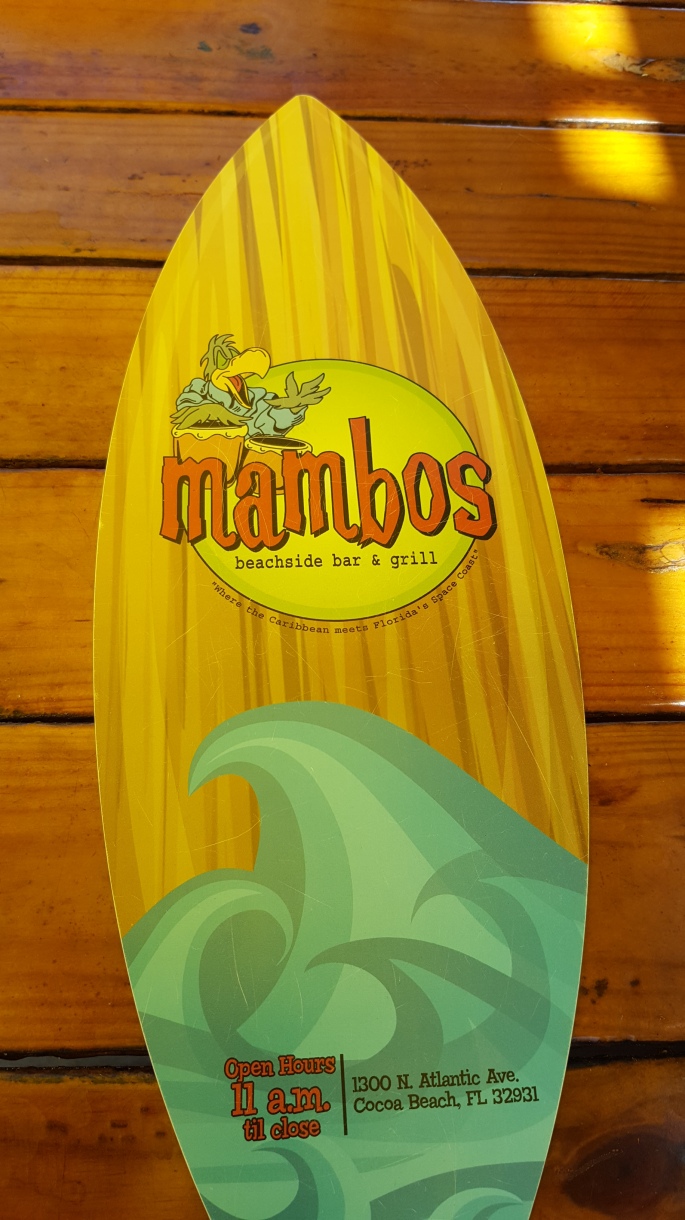 We ended the night with TV = Survivor, Madmen, & NCIS

Mar 6 – Fri
Friday was an awesome, great, memorable day !
We used the rental car to travel about 30 miles to The Midway Airboat Company in Christmas Florida.
Midway is located along the St John’s River , between the St John’s National Wildlife Refuge & the Seminole Ranch Conservation Area.

We were accompanied to Midway by Tim & Patti from Craic.

When we arrived, prior to the ride, we met Porkchop the Pig & an Un-named Parrot. 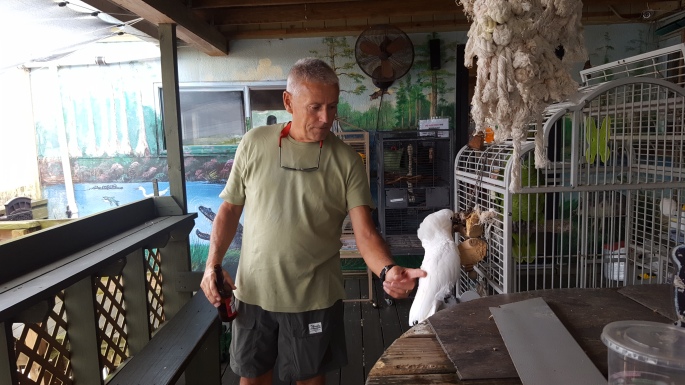 We checked in, and were soon matched up with our airboat captain Dave. 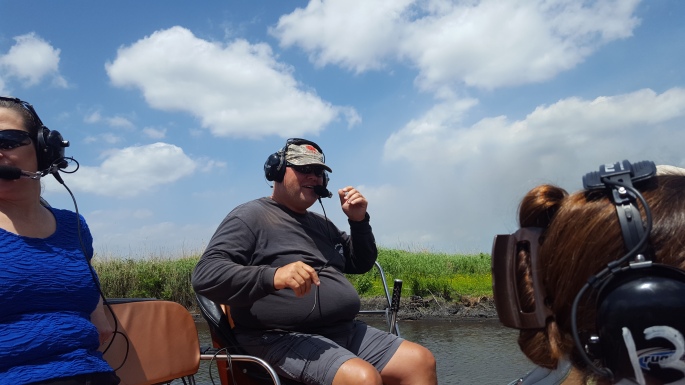 The ride started with a high speed ride on a large, wide section of the St John’s River.
Come along for a Video Ride, it’s very cool = https://youtu.be/83_RqQXd6Js

Later during the ride, we got into some more narrow/shallow sections, where Dave showed us how the Airboat manuevers.
Video Ride #2 = https://youtu.be/2S4bzII5qQc

It was interesting to see him operate the boat, it looked pretty easy compared to a ’43 Viking, there were only 2 controls ; “a foot throttle & a steering lever” = https://youtu.be/23eZrO6CVUs

If you have not had enough video, here is another  = https://youtu.be/jpP9M5dlVyY

If you did not watch the videos, here are some still shots.
We traveled over wide/deep sections, curvy/shallow sections, and medium sized sections of the St John’s River. 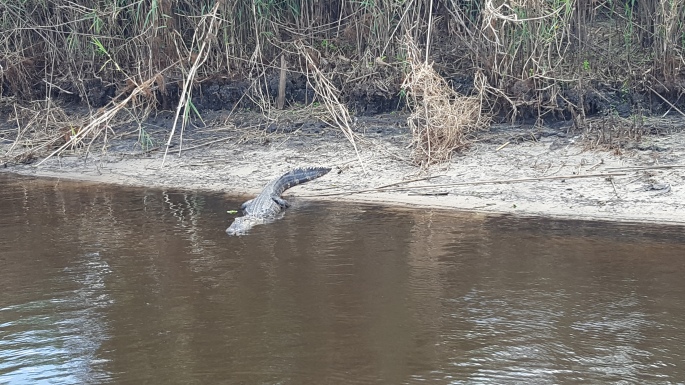 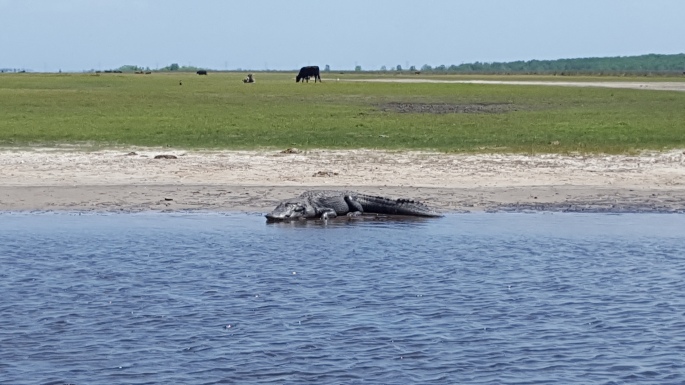 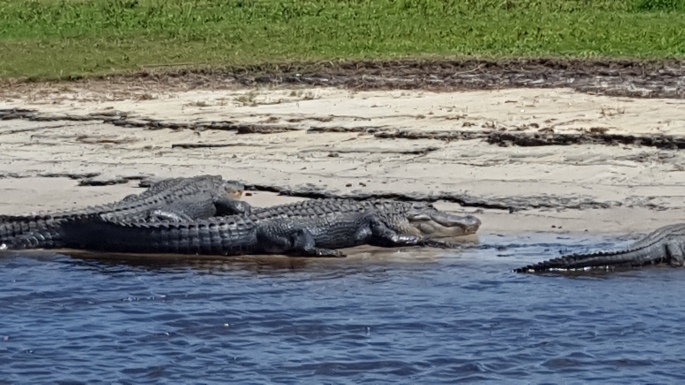 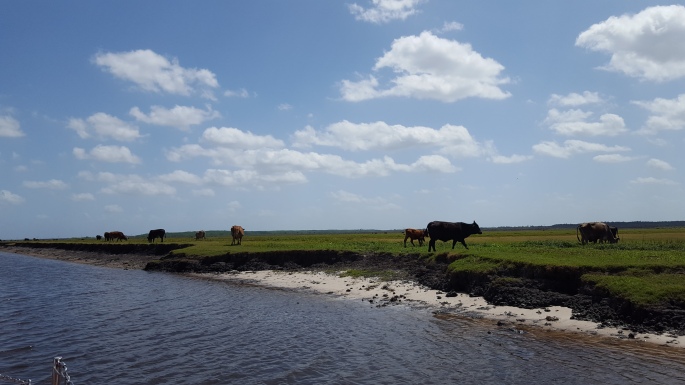 But wait, the event at Midway was not over.
As a farewell gift, we were allowed to HOLD A GATOR !
Baby Gator, mouth wrapped tight, but still – holding a gator is pretty cool.

But wait, the visit was still not over !
Inside the museum/zoo – they had a Burmese Python !
I asked if Nellie could hold the Python, before they answered, Jonell answered the question for me. 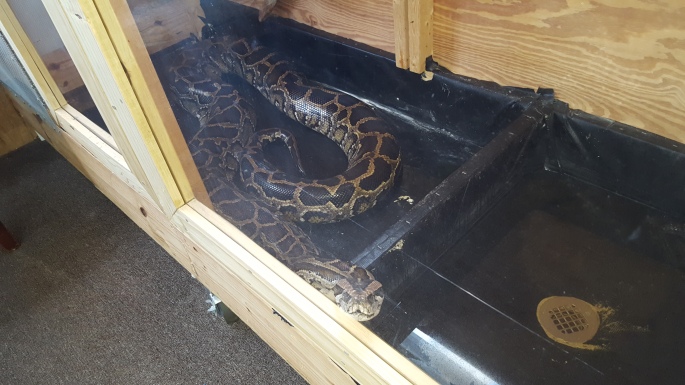 It was a very fun, memorable day on The Loop !