Well we have had some interesting events since we last wrote.
I wanted to let you all know that Looping is not always Blue Skys, Sandy Beaches, and Immaculate Marinas. Even in Looping Land we have some tough days !

Mar 26 – Wed
We started the day with an early 8am departure from The Palm Beach Gardens Yacht Club at Jupiter, and headed another 62 miles north to The Suntex Marina at Vero Beach. The ride was a somewhat uneventful ride up the ICW with 12 bridge crossings, but the lowest bridge was 17 feet, so we did not require any bridge openings. The ICW has many no wake / slow speed zones so even at only 62 miles, it was an 7-8 hour day.
During the ride we had two rain storms, followed by a LOT of wind (surprising, it usually gets calmer after the rain storms).

Then came all the fun.
OMG, worst thing that can happen, it did happen !
While backing into our slip at Suntex, I contacted the boat in the neighboring slip !!!
The wind was NE at about 20-25mph.
When the wind is high, I usually do a practice pass to see how the wind will push the boat.
On the practice pass, the wind was pushing from port to starboard. while sterning in.
I turned the boat around, realigned, and started backing into the slip.
Just as I was getting the stern into the start of the slip, a large blow of starboard to port wind occurred (opposite of the practice run) and pushed the front half of the boat into my port side neighbor, while the stern was 1/4 into the slip.
During the gust, I attempted to apply more starboard reverse / port forward throttle to rotate the bow straight, but the wind kept pushing the bow to port.
Just before contact, I went to neutral, and the contact was mainly due to the wind force contact only.

Luckily as Rodney Dangerfield said in Caddyshack “Your dinghy scratched my anchor”.
This turned out to be true, as the bulk of the contact to the neighboring boat was via his anchor. The net damage to his pristine Sabre Motor Yacht named Grand Crew, was a 2-3″ scratch on his previously pristine rub rail.
After contact, the owner John Lawrence came out from below deck.
I was surprised that he did not come out with a baseball bat.
He was very calm & understanding.
He did advise that they had just put the boat on the market, and that he would like to get the rub rail repaired.
We agreed, and settled the next day with a Murphree check & bottle of alcohol. 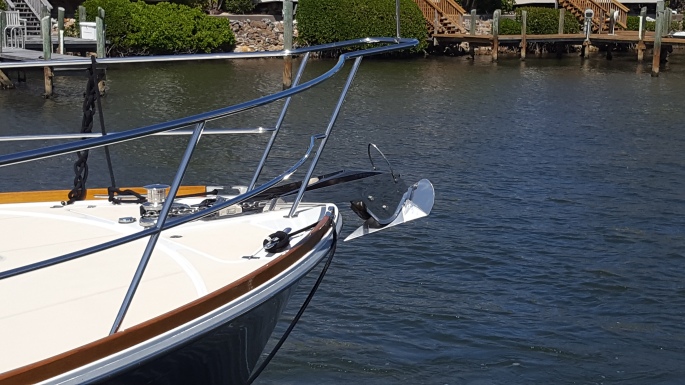 The SS Gettin’ Looped took the brunt of the contact, with a gouge to the upperbody gelcoat just below the window, and a bend in one of the port side hand rail tubes (fixable with Murphree skills).

I had been getting pretty good at dealing with wind & current, and had sterned-in at most of the ports since Fort Myers. But it was one of those humbling days in the life of Captain Mike Murphree.

We laid low that night, Nellie made Stouffers lasagna for supper. We licked our wounds with a couple soda pops, watched Netflicks, and had an early bed time.

Mar 27 – Tue
I had called Mike Miller’s Marine service last week while we were in Jupiter and set up an appointment to get the stuffing box packing replaced in Vero Beach. I had the packing done in Detroit when we first took ownership of the boat in 2016, but we have put about 400 hours on the drivetrain since then.
Both Port & Starboard shafts were leaking about 15 drips/minute stationary, there should be no leakage without the shafts turning. I attempted to snug up the starboard packing nut myself by rotating the nut about two nut flats, but the nut got too hot under operation, so it was time for a repack job.
I had watched this operation in 2016, and have watched countless videos on how to do this. I am sure that I could have done it myself if the boat was out of the water, but I did not have the go-nads to attempt to repack the stuffing boxes myself with the boat in the water.
Mike Miller’s rep Kenny arrived about 10am & was done by noon.
We now have no leak at idle, and we will find out on Thursday if the nut temps are ok while underway, or need adjusting.
I also learned that changing the packing while the boat is in the water is not that big of a deal, I will be able to do it next time, if ever required again.

Tuesday night returned to fun-time, as we took a taxi from our Suntex Marina at Vero Beach about 5 miles south to The Vero Beach City Marina, to meet our friends from the vessel Craic, Tim & Patti Gareau.

We had not seen Tim & Patti for about 3 weeks, since The Fara Blanco Marina on Marathon Island, when I went on the dinghy flotilla ride with them on their dinghy.

Mar 28 – Thu
Thursday was a low-key day.
The Suntex Marina is a nice pretty place, it is immersed within a beautiful gated golf course community, but it is too far away from the city. If you don’t have a car, it is a little bit boring. The marina trip planner (me) needs to do better research next time and book closer to the city.
The Uber/Taxi rides of only 5-6 miles are $15-20 one way, so we laid low.
Jonell did laundry.
Mike did advanced marina planning.
We sat by the very nice Suntex Pool, and listened to the pool side waterfall for a few hours.
Local Davila’s Pizza delivery for dinner. 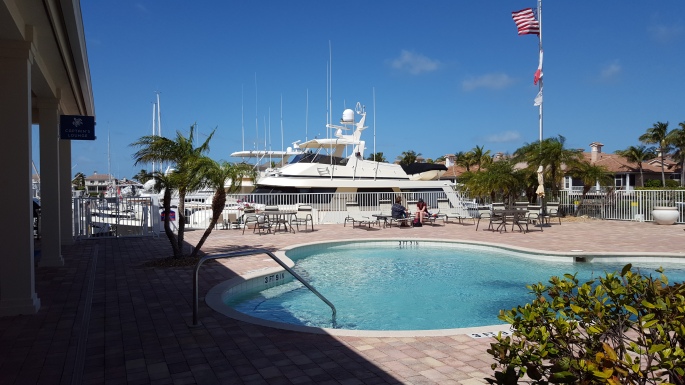 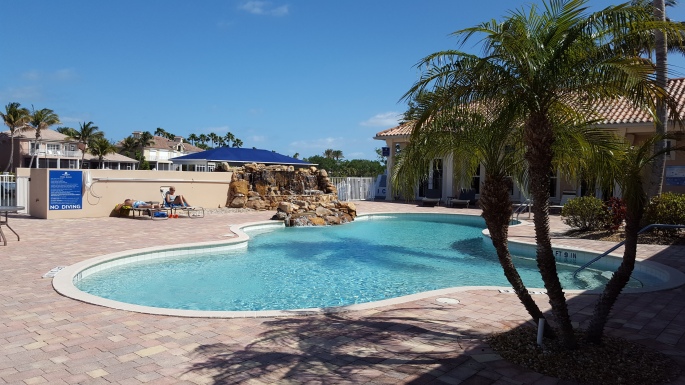 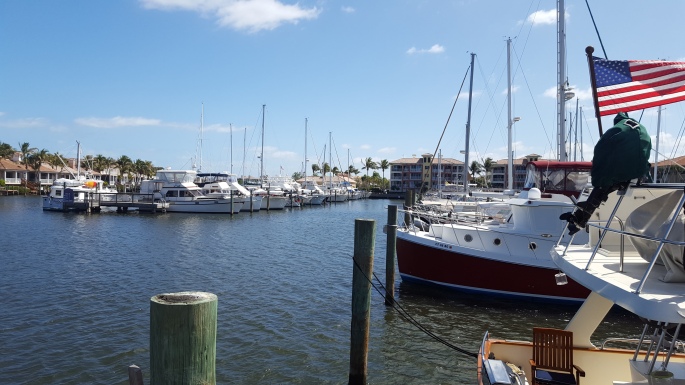