May 29 – Tue
Well, since the Hinman’s left it has been pretty much non stop rain.
Hurricane season is starting early with storm Alberto causing a lot of havoc for many folks on the coast & rain for us on the North Carolina ICW.

While y’all were having 90 degrees & sunshine back in Michigan, it rained all day in Beaufort yesterday (memorial day) . The forecasts show the rain continuing thru to this weekend.

So we departed Beaufort today for Oriental North Carolina, expecting crappy weather. The day started out great with NO RAIN and even a little bit of intermittent sunshine throughout most of the 29 mile ride.

As we approached Oriental, I saw the rain clouds coming and kicked up the speed across the bay to 20 mph, attempting to outrun the storm – We ALMOST made it.
But just after we called in to Oriental Marina, vicious winds of 30-40mph kicked up quickly. We called the marina back and told them that we would ride out the storm in the bay vs attempting to dock in the violent wind.

30 minutes later, the storm passed, the winds died to zero, and docking was a breeze (pun intended).

After docking, meeting the very nice harbor master Tom & office worker June, we did the once around tour of the Oriental Marina.

Oriental Marina is a very small quaint little marina with only 11 slips.
It is actually called The Oriental Marina & Inn, and has about 20 rooms in the Inn.
It is a very cute place with a nice clean Pool, Tiki-Bar, on-site restaurant, & very clean showers in which the marina supplies the towels/shampoo/soap (a first on The Loop) ! 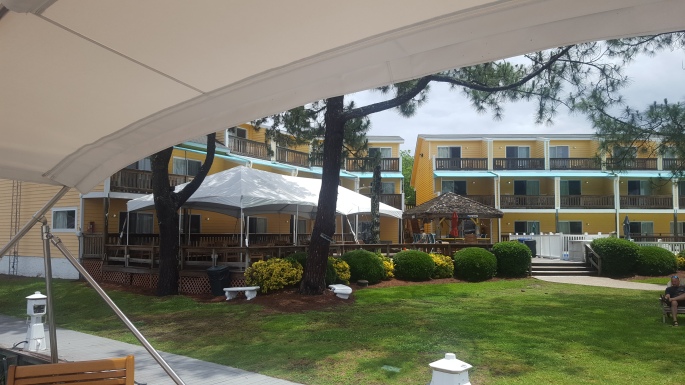 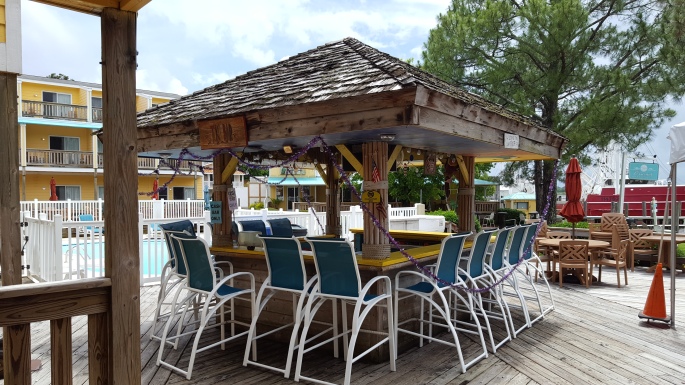 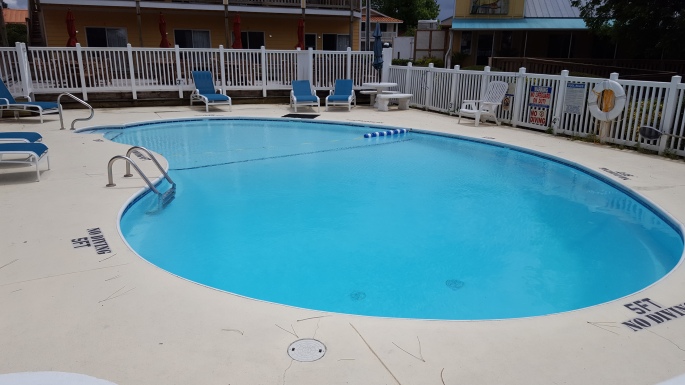 The town also has a webcam over-looking the marina. Can you see the bow of Gettin’ Looped, just behind the blue building, on the webcam shot (sent by Beth Tyler).

After gettin’ settled in at the marina, we went for a short walk through the town of Oriental. I needed to mail some grad & birthday cards for my nieces, and we had to go to the ATM. So we combined our chores with a town visit.

Oriental is like the marina, a small quaint town of less than 1000 people. Office worker June says ” everyone knows everyone, and everyone knows your business”.

The town of Oriental was named after the Sailing Steamer Oriental, built in Philadelphia in 1861, the ship was used as a Federal transport ship in the Civil War.

It is said that the famous pirate Edward Teach or Blackbeard made his home in Bath NC, just North of Oriental.

As we started our walk, it started to sprinkle again, but we carried on with our umbrellas in hand.
We strolled by the various businesses, gift shops, stores, hardware, & churches.
EVERYONE we passed said hello or waved, it was a very friendly town.
We walked thru ; the Treasure Company, the Marine Provision Store, the Captain’s Quarters Gift Shop, & the Hardware. 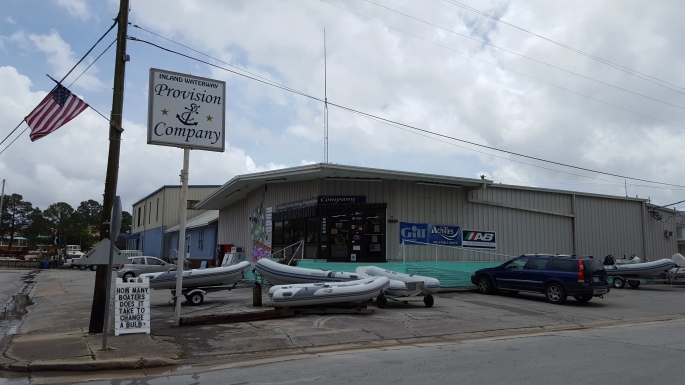 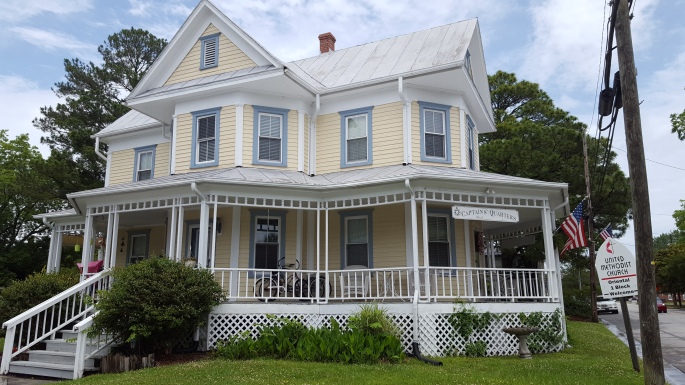 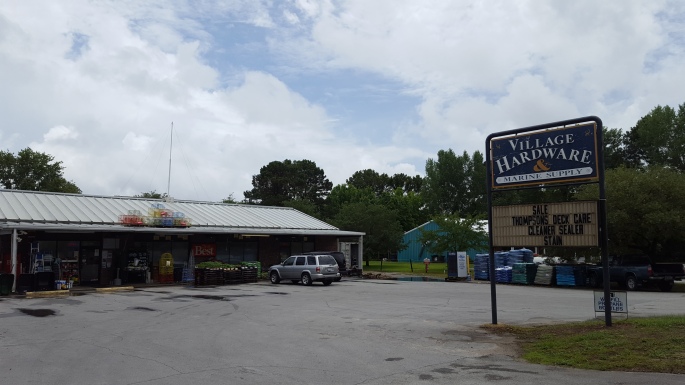 We stopped and had lunch at the Oriental Deli & Subs.
Again, the folks inside were very nice.
We did not want to eat too much, because we had a special treat later in the evening – dinner with our ole pals Lab Partners – Beth & Rip Tyler. 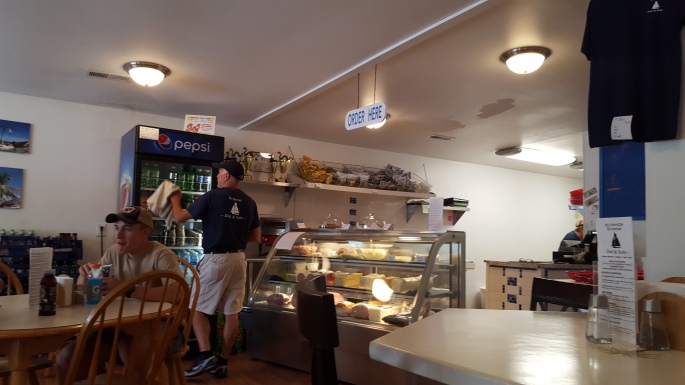 We also got our mailing & ATM needs taken care of.

Even though the town was small, they did offer a Therapy Service that we could have used with The Hinman’s. 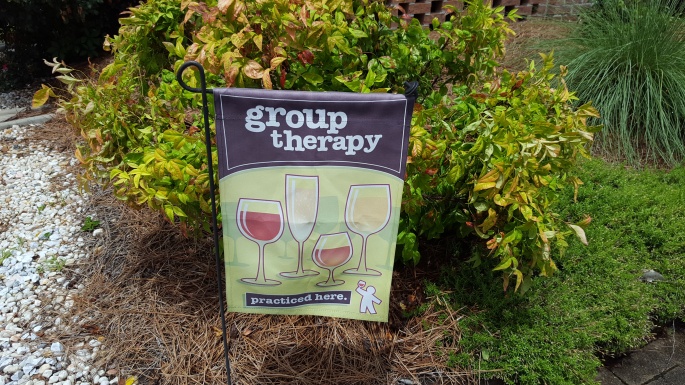 As we said above, tonight was a special night – a reunion dinner with Looper Friends Beth & Rip Tyler from Lab Partners.
I believe that we first met Rip & Beth way back on the Joliet Wall just south of Chicago, but started becoming good friends in Grafton Illinois, just north of St Louis.
I thought that they had completed their Loop, but we found out that they actually put the completion of their Loop on hold, due to the unexpected sale of their 36 Monk while they were in Punta Gorda Florida (an offer they couldn’t refuse).
They have now purchased their post-loop vessel, a trailer-able 27′ Rosborough, and plan to complete their Loop next winter, and then use the boat for future travels out west.

We started our night with reunion discussions on the Gettin’ Looped.
We then moved to dinner at Brantley’s Restaurant in Oriental.

After dinner at Brantley’s , we ended the night with drinks at the Oriental Marina Tiki-Bar. 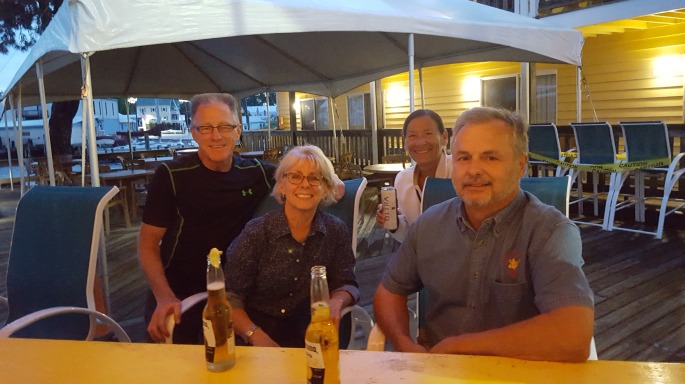 It was wonderful re-living old times and talking about old mutual looping friends.

We also picked their brains about our upcoming trip thru the Chesapeake Bay, Annapolis, & Washington DC.

Next Stop = Belhaven North Carolina, about 50 miles north of Oriental.