Hey Blog Followers,
Today’s blog post is from Saturday July 28th.
Our plan for the day was to travel from Trenton Ontario to Campbellford Ontario.
It would be only  a 32 mile trip, but thru 12 Locks !
If this was the Erie Canal, I would say – No Way, 12 Locks in one day.
But lockmaster Tom, at lock #1, advised that we should be able to do the trip in 6-7 hours.

But our first order of business was gettin’ fuel & pumping out the heads.
We left the beautiful Trent Port Marina about 7:30am, to be ready at the Trenton City Fuel Dock for the 8am opening.

On top of the good news (not) regarding the pump out, it was also our first fill up at a Canadian marina.
After converting the liters to gallons – OMG = $6.22 a Gallon !!!!
The most we have paid anywhere on The Loop has been about $4.60/Gallon.
I also confirmed that this was not a fluke, or an abnormality – this is what we will be paying throughout Canada (looks like more Subway meals coming).

After fueling, it was off to Lock #1 on the famed Trent Severn Waterway.
The Trent–Severn Waterway is a 240 mile long canal route connecting Lake Ontario at Trenton to Georgian Bay at Port Severn.  This natural waterway includes the Trent River, Otonabee River, the Kawartha lakes, Lake Simcoe, Lake Couchiching and the Severn River. Its scenic, meandering route has been called “one of the finest interconnected systems of navigation in the world”.

Lock #1 successfully completed.
Only 11 more today, and 40 more before we arrive in Georgian Bay.

As we were exiting Lock #1, we saw a couple dare-devil boys swimming & jumping off of an old railroad swing bridge just past the lock. These kids were crazy & fearless.
I would have never tried anything this dangerous. 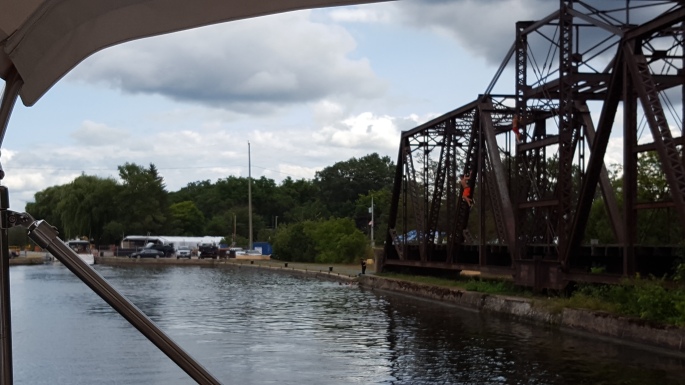 The views during the ride were again very pretty (yawn) , We saw our normal allotment of beautiful homes & pieces of real estate.

We experienced yet another mid-day rainstorm while underway.

The ride into the city of Campbellford was gorgeous, with highly manicured, tree lined fairways into the city. 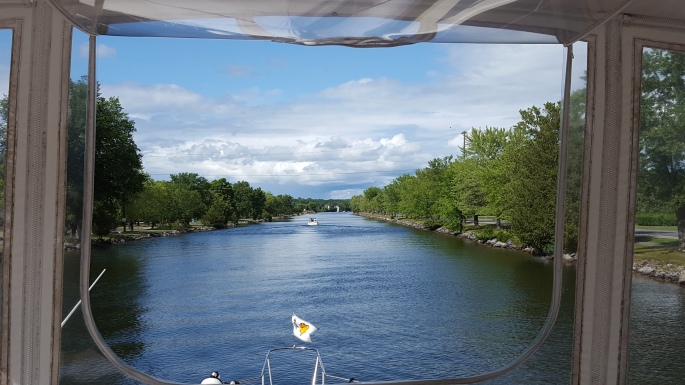 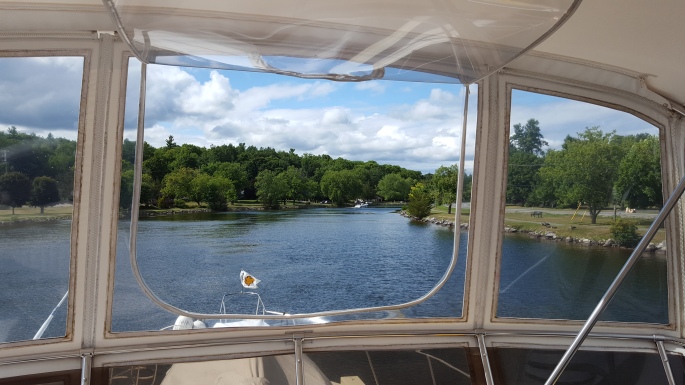 After the 7:30am departure, we completed the 12 Locks and arrived in Campbellford about 3pm, a 7-1/2 hour day.

We got tied up to the first come, first serve city dock wall.
It’s actually pretty nice digs on a nice manicured park setting called, The Old Mill Park.
The Old Mill Park has the biggest Canadian Toonie ($2 piece) in the world. 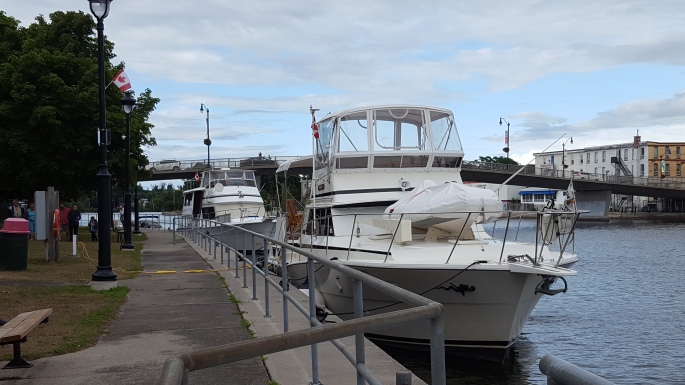 I’m not sure what they put in this Canadian drinking water, but while we were having drinks on the back deck, we saw some more young Canadian boys being dare-devils.
These guys were actually jumping off of the main bridge in Campbellford.
And it was not one, watch me jump, they were doing it over & over. 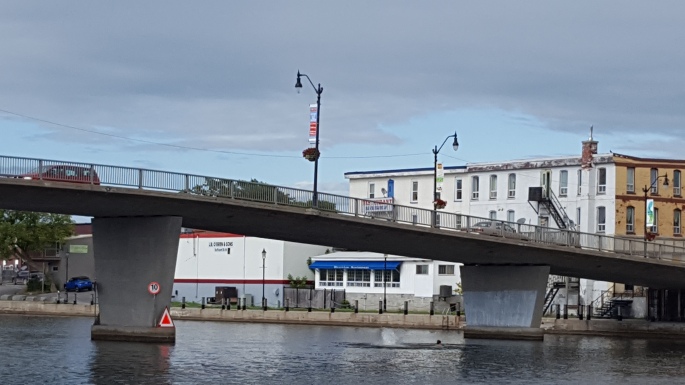 After watching the boys jump from the bridge, it was our favorite time of the day, it was dinner time.
We went to a place called Capers Tap House.
Set in an intimate 1890 heritage home, it was wonderfully old/historic house inside & a relaxing patio atmosphere on the outside, with a nice Jack Johnson type musician. 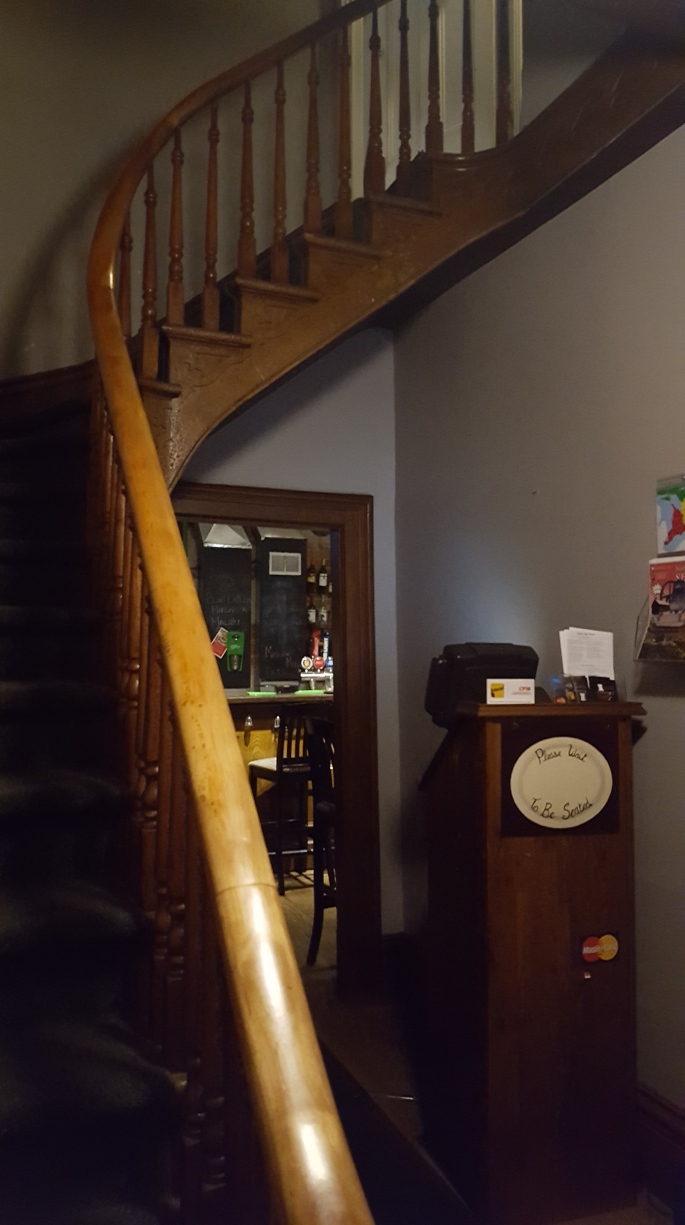 After ordering our drinks, and while we were waiting for our dinner, we noticed a guy in a mobility scooter at the entrance to the patio. He was by himself, and there were no tables left outside, so we invited him to join us.

His name was Ken (why, that’s my brother’s name).
As it turned out, this was Ken’s place !
He doesn’t own the place, but he lives close by and comes by scooter to Capers Tap House every day for a beer & order of fries.
Ken had a stroke about 4 years ago that robbed him of his driving freedom, but he uses the mobility cart to try to keep some sense of independence.

We had a great conversation for about 90 minutes.
I treated for his beer & fries.

That’s all for Saturday July 28th, Eh ! (we are now in Canada, need to speak the language).

Next Stop
Hastings Ontario
Only 20 miles away & only 6 Locks.
It should be a lay-up after the 38 miles & 12 Locks today.