Aug 1 – Wed
We got a late 9:30am start from Peterborough to Youngs Point Ontario.
The Canadian Lock System does not open for business until 9am, and the 1st lock (lock #20) was right next to the marina.

Local boater & Gold Looper Rob, had told us that even though they start at 9am, the doors won’t open until 9:30am, he was correct.

After locking thru Lock #20, which was a normal Lock, we were on our way to the famous Peterborough Lift Lock (Lock #21 on The Trent Severn Waterway).
If you read the last post, you will recall that the Peterborough Lift Lock is an Engineering Marvel built over 100 years ago, which basically moves boats up & down by only water weight & gravity (see port #116 post). It acts like a giant seesaw.
They call it a Lift Lock because the water level in the lock does not go up & down like a normal lock. You are essentially in a Tray of Water, which is Lifted from one water level to another.
The ride was much smoother than a normal lock, there was no turbulence from water rushing into or out of the lock.

We went into the Lift Lock with fellow vessels Change of Pace & Knot Happening.

Our new pal & Gold Looper Rob Liss also showed up at the Lift Lock to take some photos (Thanks Rob).
Rob & Glenda completed the Loop in 2016/2017.

Check out the shots that Rob took of Gettin’ Looped coming into, and going thru the Peterborough Lift Lock. It was an exciting experience.

After going thru the Lift Lock, we were on our way.
Change of Pace stayed back to go to the Lift Lock museum.
We traveled and went thru the next 7 locks with Knot Happening.
It was a beautiful ride.
We went under some fixed bridges, thru some rotating bridges, passed a nice golf course, and thru some very shallow twisty/windy/rocky sections of The Trent Severn.
The pictures don’t do justice, it was very pretty. 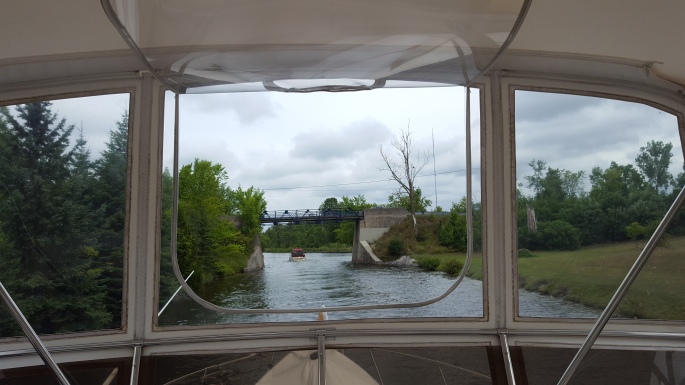 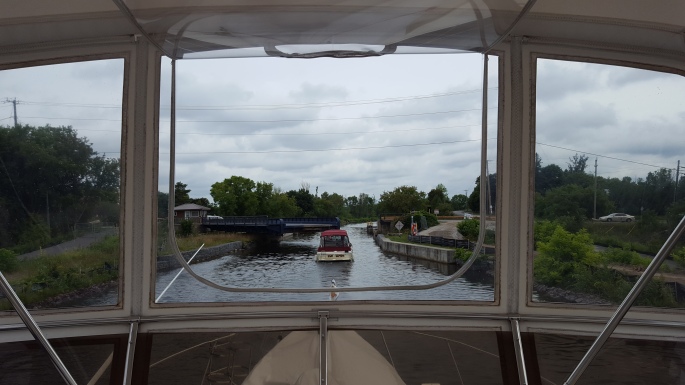 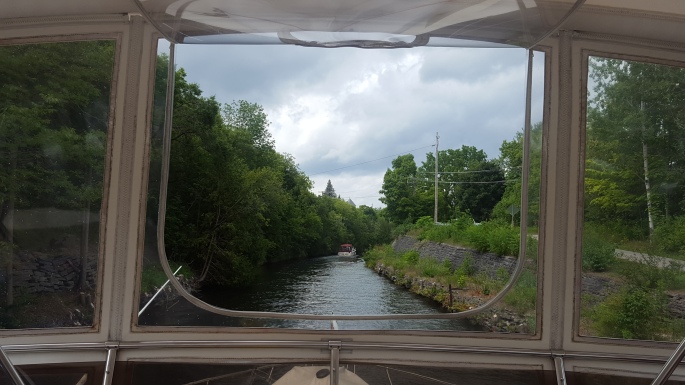 After a bit of a ride, we arrived at Lock #22, which had an interesting mile marker tree.

Our last lock of the day, Lock #27, was training the young Lockmasters of the Future.

We arrived at the Islandview Resort about 3pm.
Well, it’s not a resort, but a trailer park marina.
We were assigned a slip on fuel dock, really the only space big enough for us.

It doesn’t look like much, but the place is awesome.
I told Jonell about 3-4 hours after we arrived that I loved this place.
It was just much more relaxed than the normal marinas.
And it was on a beautiful setting which made me feel like I was with Henry Fonda, On Golden Pond.

We had dinner at the restaurant RIGHT AT OUR BOAT SLIP – Patio 27.
Even though we are in Canada, it felt like we were “down home” in Mississippi or Alabama, the locals were so friendly.

We had a fairly long conversations with the ole folks in the table next to us.
One of the old guys was an exec at Cummins Engine Company, who Dodge Truck gets their diesel engines from.

We also had a conversation with another local who I did not get his name.
He arrived in a very nice 1950’s Mercury Truck, made only for the Canadian market back in the 50’s.
I told the ole fella about Ashley’s boyfriend Dave’s 1952 Chevy, and we traded photos. 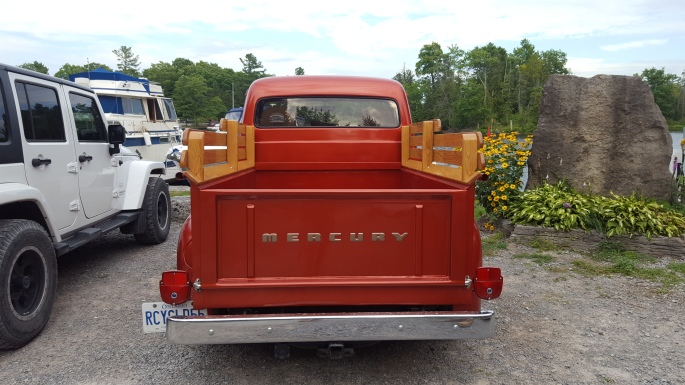 Next Stop = Bobcaygeon Ontario !
see you later tonight or tomorrow.