Aug 2 – Thu
Thursday August 2nd – we moved from the very quaint Islandview Resort at Young’s Point to the city of Bobcaygeon Ontario.

Bobcaygeon is known for having the first built, & oldest Lock on the Trent Severn, Lock #32 built in 1858.

On the way to Bobcaygeon, we went thru the SPECTACULAR 100 Islands section of the Trent Severn Waterway (Ok, I just made that up) – OMG so beautiful !
I say 100 Islands, because there is a different very famous area on The Canada / US Border on the St Lawrence River north of Kingston, called The 1000 Islands.
The area we went through, my version of The 100 Islands, is basically a series of Islands in Stoney Lake, just northeast of Young’s Point.
Again, the photos don’t do the visual reality justice. 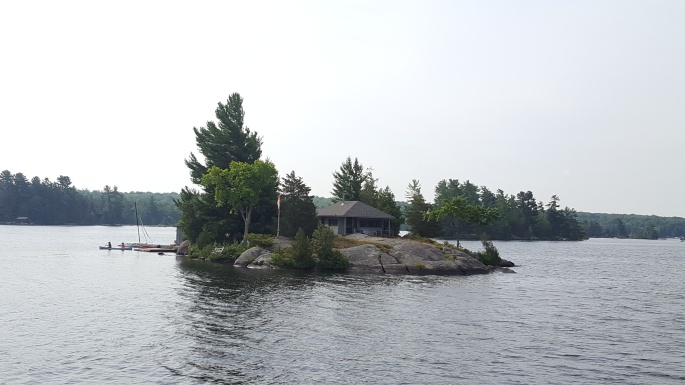 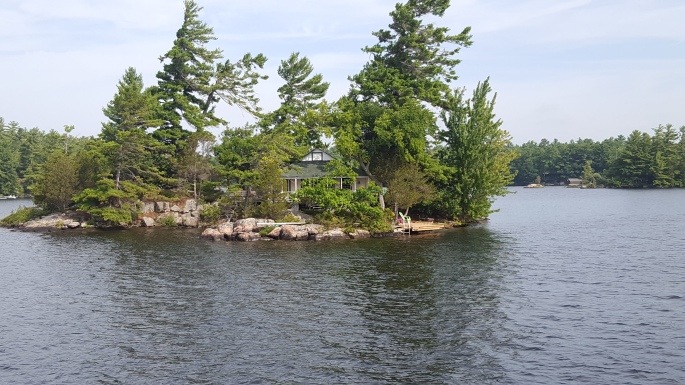 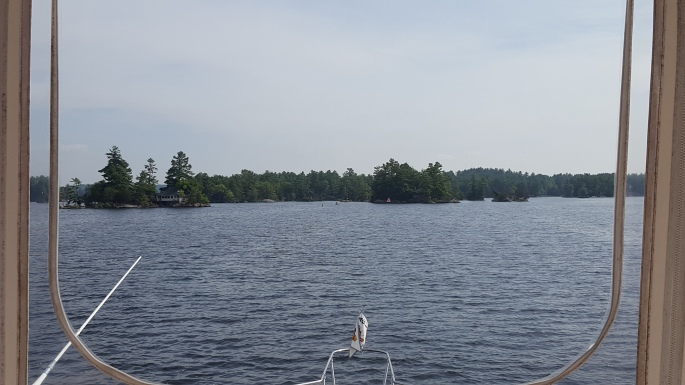 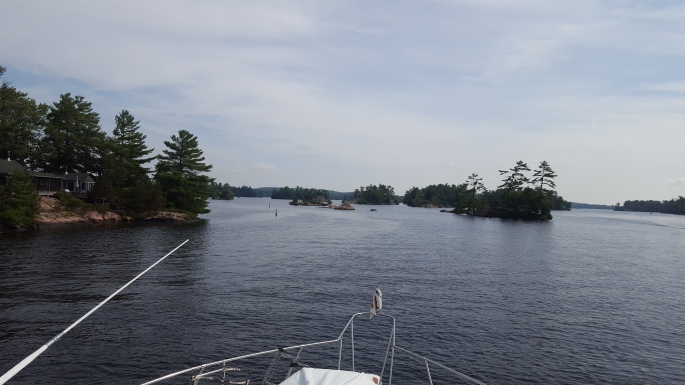 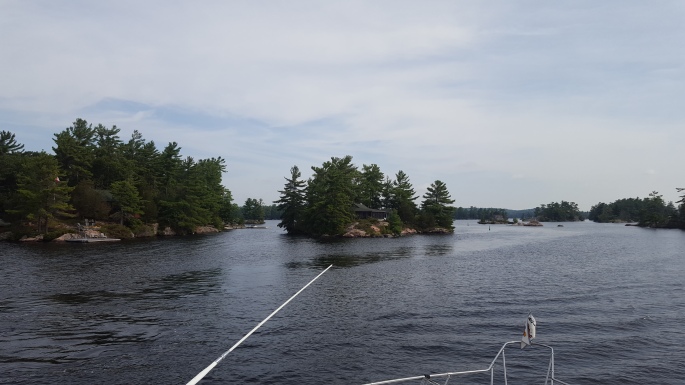 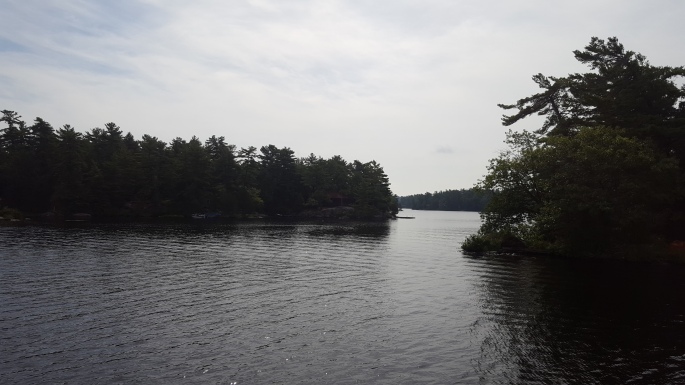 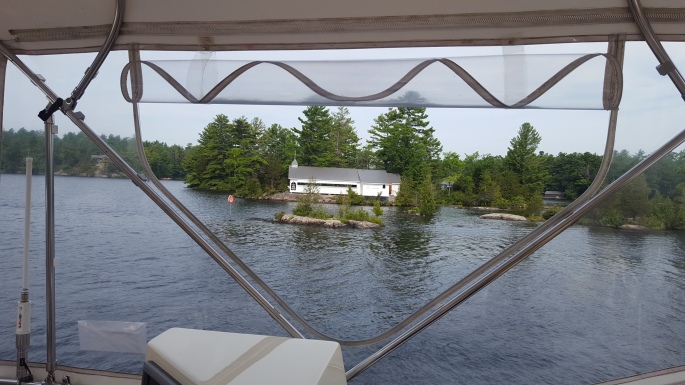 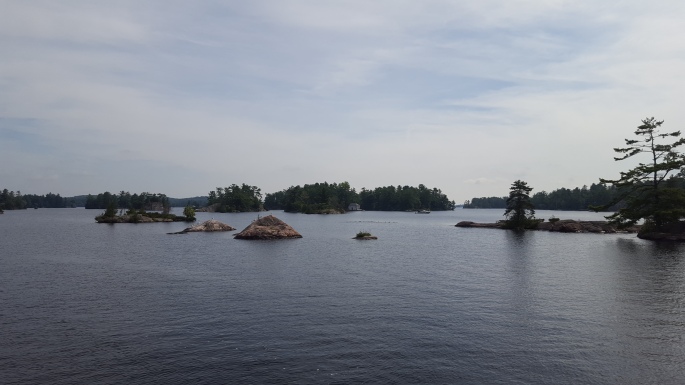 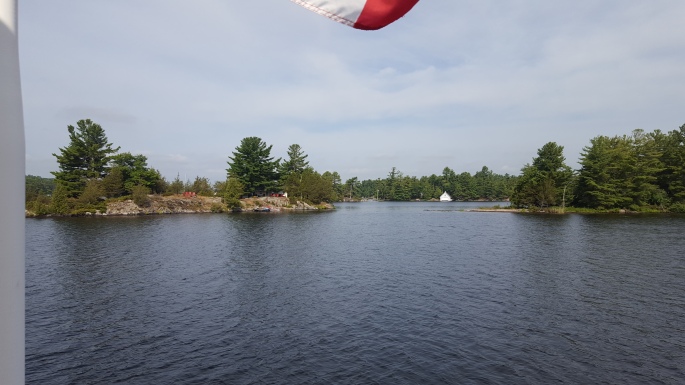 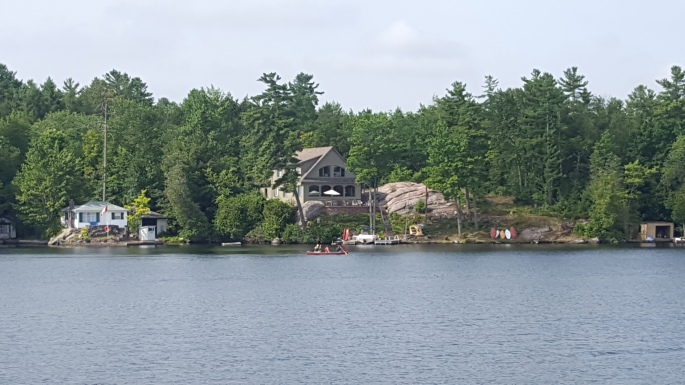 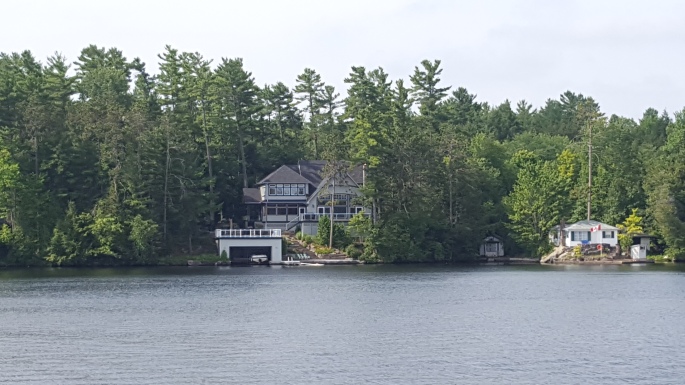 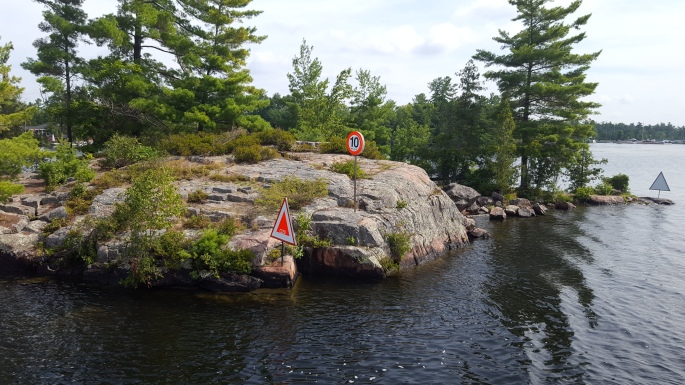 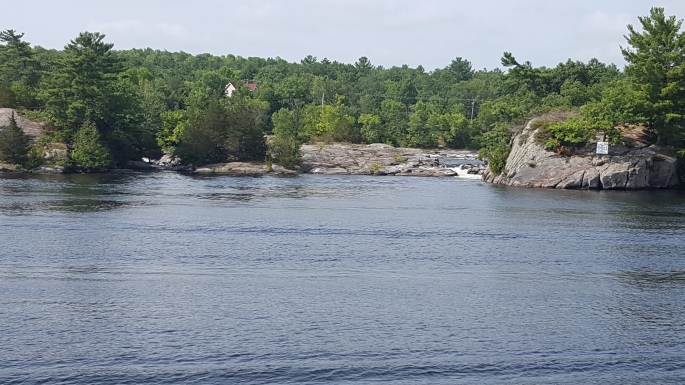 After the Stoney Lake Islands, and before reaching the Sunset Cove, we passed thru the little town of Buckhorn & the Buckhorn Lock #31. We did not get off the boat in Buckhorn, but did snap some photos of their mascot Bucky the Deer. 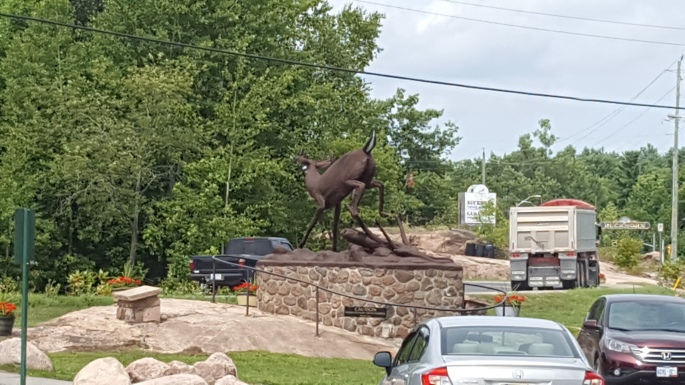 A short while later we arrived in Bobcaygeon Ontario, just short of Lock #32.
We arrived at Gordon’s Yacht Harbor.
Well guess what – it is not really a “Yacht Harbor”, I would call it more of a boat harbor, we are by far the biggest boat here.
Gordon’s was another fuel dock marina slip, but this time no trailer park like at Young’s Point (and no cool restaurant right at the slip).
It was not as quaint as Young’s Point, but nice.
The fuel dock slip is in a good location, we can see the entrance wall to the lock #32, and there is a lot of boat traffic to watch.

There are a lot of houseboats, there is a rental company somewhere around here.
It makes me nervous having all these guys buzzing around us, especially in the locks. 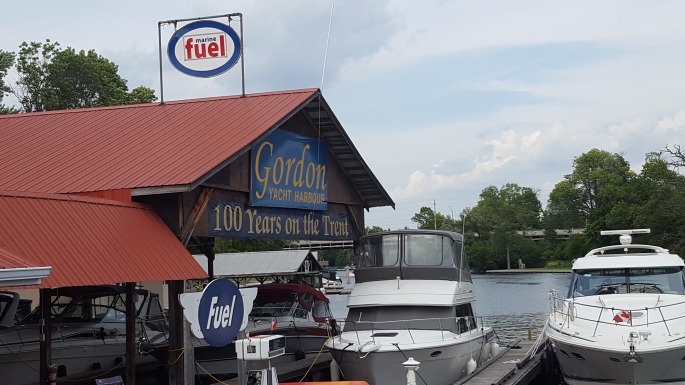 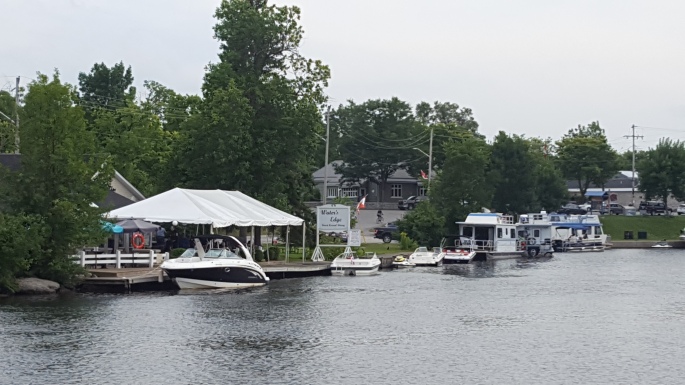 After gettin’ tied up, electrical hooked up, & water – it was time for a Yeti Juice in honor of Mike Feeney (Rula Bula).
BTW – Congrats to Rula Bula from Green Bay, who just crossed their wake this week (ie completed The Loop). 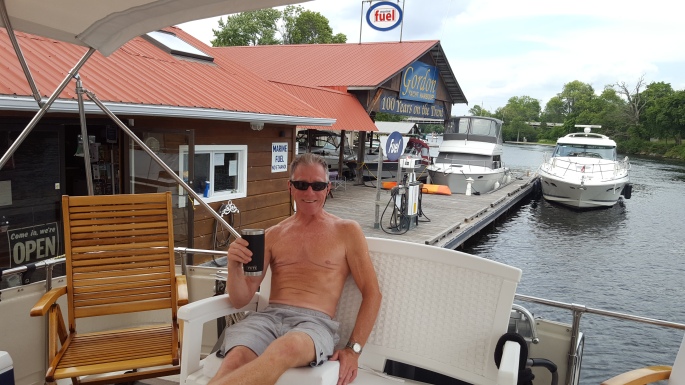 The city of Bobcaygeon is pretty cool, there are lots of options for dining.
Bobcaygeon was incorporated in 1876, but is currently known as hip-town Canada. 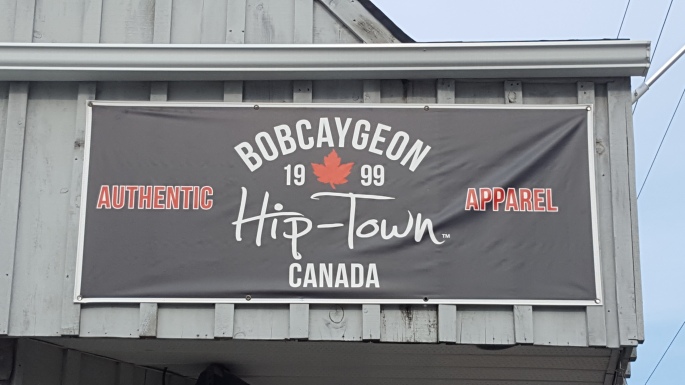 Before going to dinner, we went shopping at another place in which Bobcaygeon is famous for, Bigley’s Shoes & Clothing Store. For some reason, we forgot photos.

To get to Bigley’s & the restaurant area, we crossed over a bridge that brought back some more memories. It was the same bridge where we had watched the Canadian Independence Day  Parade in 2015, when travelling with Kat in the Hat.
I remember the parade like it was yesterday.
The parade went on for over an hour. They had the normal mayor & high school bands, but also it seemed like every person in town was in the parade – the plumbers, the barbers, the real estate guys.
It brought back great memories of a Mayberry RFD type Parade. 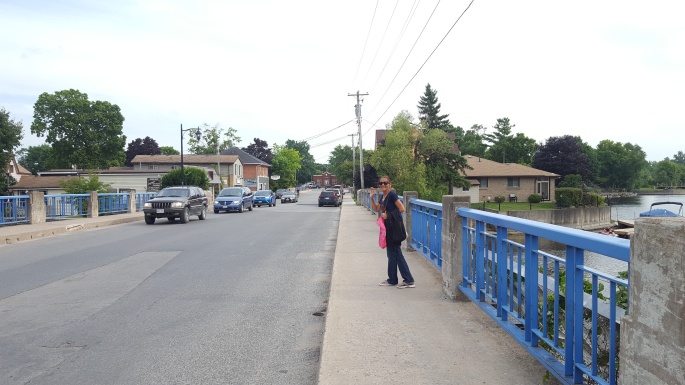 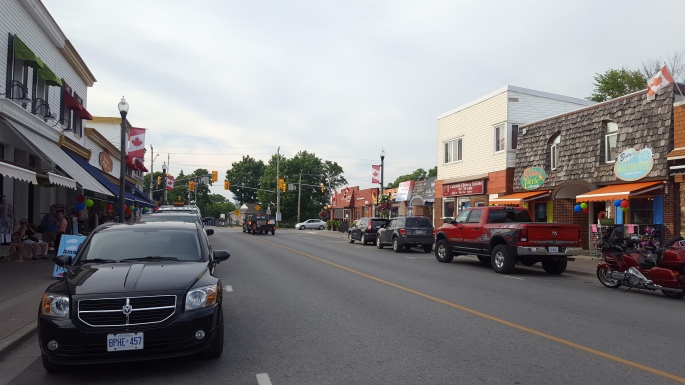 As I mentioned, Bobcaygeon is famous for Bigley’s Shoe & Clothing store.
Jonell was searching for shoes for Dan’s wedding to compliment the dress she had purchased at Hilton Head & the Shawl she had purchased in St. Michael’s Maryland.

Jonell ended up buying nothing.
Mike got some new sandals & another hat (I have now lost 2 hats on the trip by not having my chin strap on).

The new hat is a “Tilley”, guaranteed to float forever, or at least long enough for you to circle back on your yacht and retrieve it.

Dinner was an adventure.
There are MANY dinner options in Bobcaygeon.

The first place we stopped at, was a place called The Kawartha Coffee Company.
It doesn’t sound like much, but it looked like a really cool setting, and had $10 tacos & $6 Margareta’s on special.
After gettin’ the menu’s and having our order taken, we sat there for about 1 hour without even the drinks – we left ! 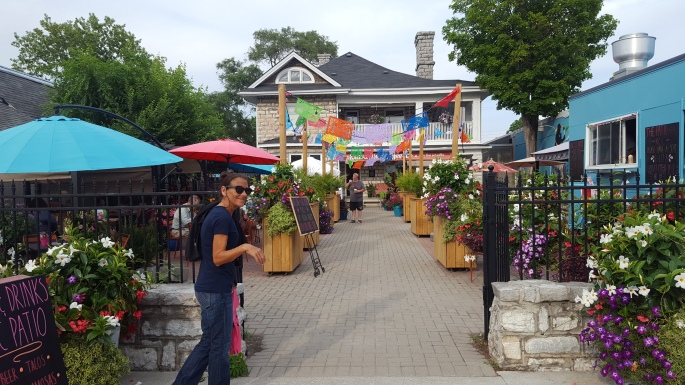 We then went to a place called Just for the Halibut, a 4.5 star rated place.
We stepped in to get on the seating list, there were already 3 couples waiting in front of us – we left. 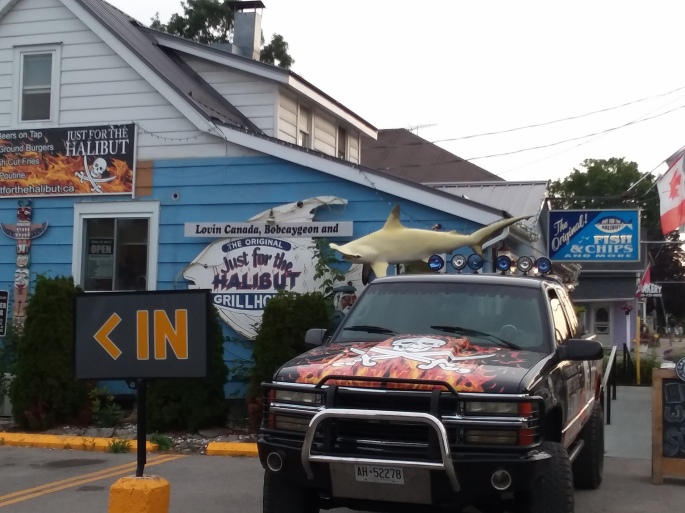 At 8pm, We ended up one of our favorites ! 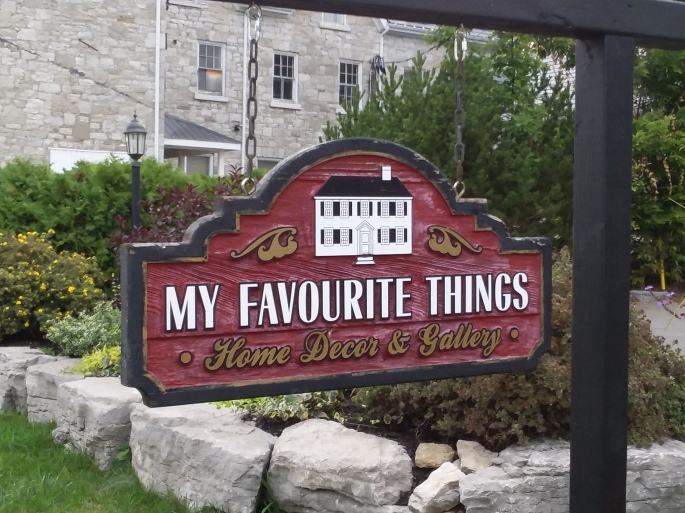 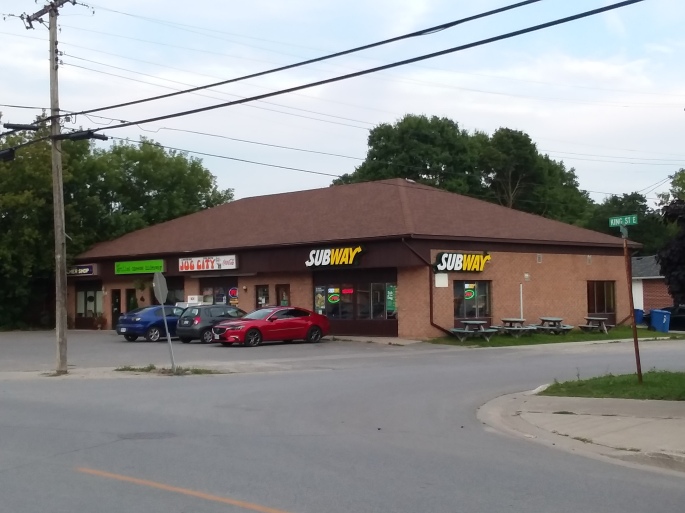 On the way back home, we stopped by the Thursday night Concert in the Park.
We listened to the band for a while, and then took some photos of Nellie next to the Bobcaygeon Lock, in her Detroit Tiger Gear (Tiger shirt a gift from Carol Perotta, thx Carol).
Later that night I sent the photo into the Detroit Free Press “Travel with the D” photo campaign.
Let’s see if she get’s selected to be in The Free Press ! 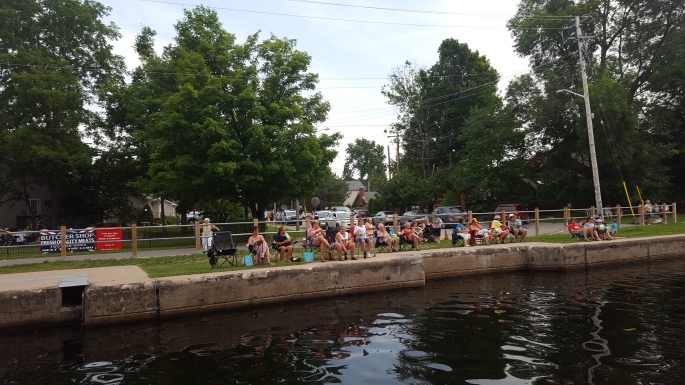 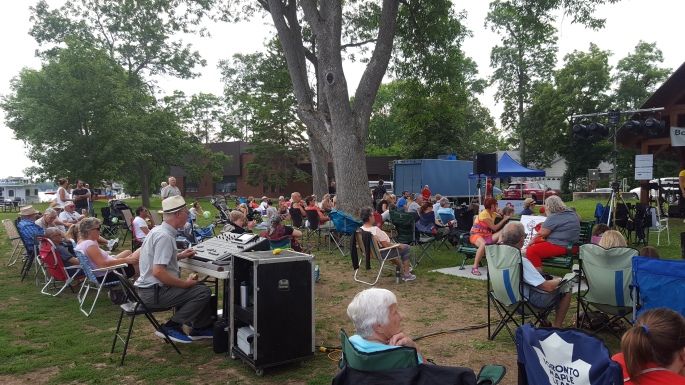 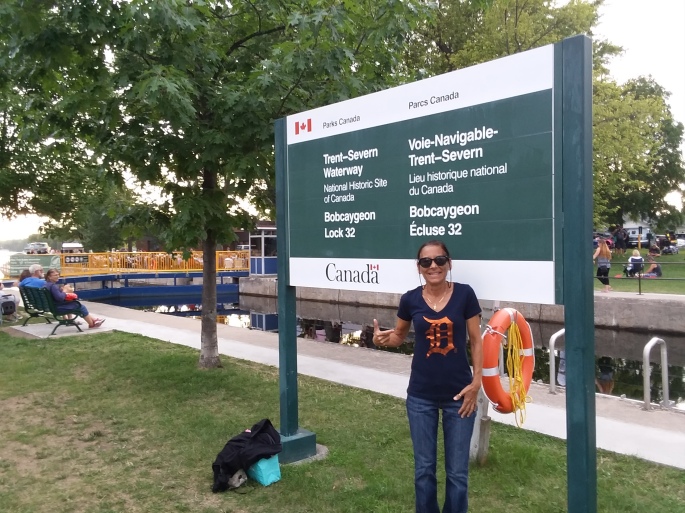 That’s all from Bobcaygeon Ontario.

Tomorrow =
> Bolsover Ontario, and the Sunset Cove Marina
> 5 Locks including The Kirkfield Lift Lock (little brother to the Peterborough Lift Lock).
> The Narrows (7 mile section of the Trent Canal with rocky edges).