OMG – I think this may be the most beautiful anchorage that we have had on The Loop.

Good thing too, it will be our last anchorage on this great journey, and we are only 7 Ports away from arriving home at Miller Marina in St Clair Shores Michigan.

We will officially “cross our wake” later this week in Presque Isle Michigan.
Cross your wake means that you have completed the entire Loop, and have returned to one of the ports that you first began your Loop (more on this in upcoming posts).

Back to todays update.

We left Little Current about 8:30am, after a quick 100 gallon top off.
Our anchorage spot for the day/night was South Benjamin Island.
South Benjamin Island is only about 20 miles from Little Current, but we wanted the early start because we had heard about how crowded the top rated spot at Benjamin gets (1 of 5 spots), and we wanted to arrive between 10-11am.
This time of morning is when most boaters from the night before would leave, and it is earlier than most new Sunday boaters would arrive.

We had a wonderful ride !
It was so calm, so smooth, so quiet with boat traffic – excellent start to the day.

While underway, we heard on the VHF radio, a Sunday morning broadcast from The Georgian Bay Cruisers Network on channel 71.
Most of the discussions were about weather and local news happenings in Georgian Bay & The North Channel.

But there was one cool update about several boats at Heywood Island, and their interactions with the local BEARS !
Check out the video below.
It’s not really the video that is of interest, it’s the audio of the Cruisers Network guy talking about the Bear sightings.
VIDEO/AUDIO – Bears on the Boats ! = https://youtu.be/gmImBno2jT4

Moving On !
We arrived at South Benjamin Island about 10:30am.
South Benjamin is another one of the places recommended to me by Doug Edgar, local Georgian Bay expert, and the guy who took us on the tour of Beaver Island last August.

South Benjamin Island may be the most stunningly beautiful anchorage that we have had on The Loop.
Here are some pics from a 360 degree look around our boat. 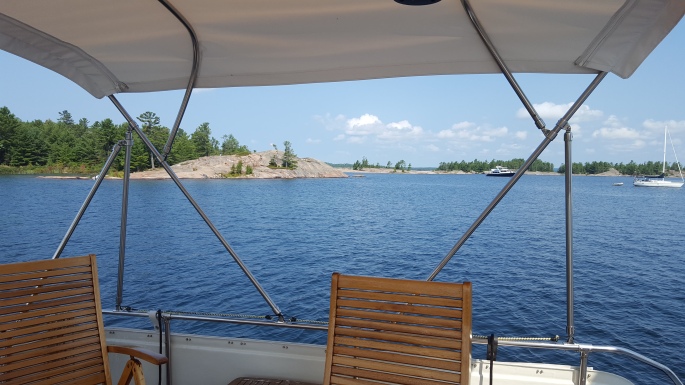 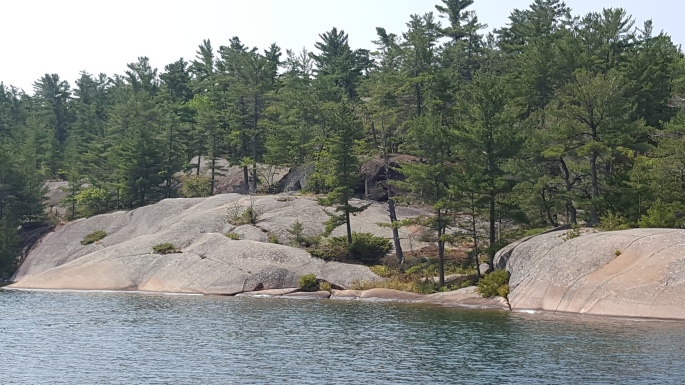 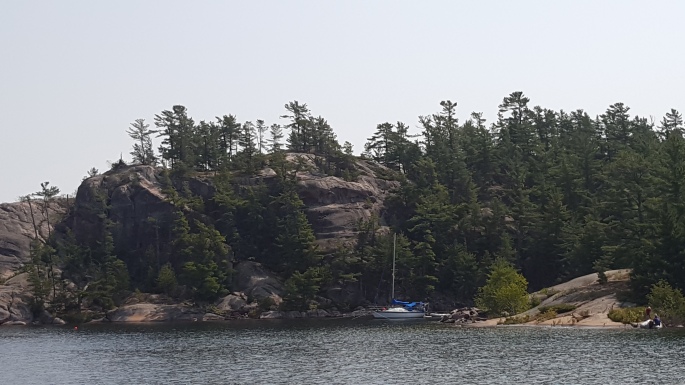 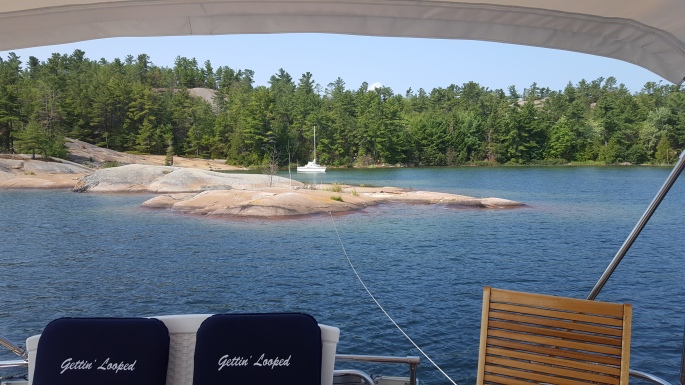 After the arrival, anchorage, and mandatory “arrival drinks” – It was already gettin’ warm out and seemed like a good time for a swim in the wonderfully clean water.

While swimming I went over to one of the several mini-islands in the bay.
It was such a nice setting out on your own private mini-island, that I went back to get Nellie, some chairs, sandwiches, and drinks.

I got Nellie over to the island without even getting her toes wet.
The setting was wonderfully relaxing.
It was a beautiful day on our own private island.
We spent about 3 hours there, swimming, taking photos, watching hikers, watching boaters, and just chillin’ out.
It was relaxation, at its finest !
My routine of ; swimming, getting out & laying on the warm rocks, and then swimming again, over and over – was therapeutic.
Check out the Pics, it was stunningly gorgeous scenery. 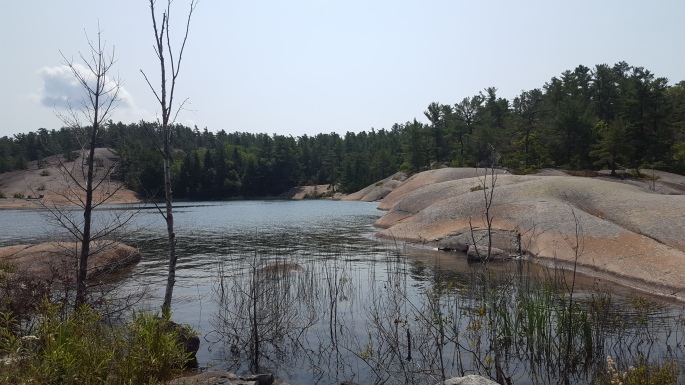 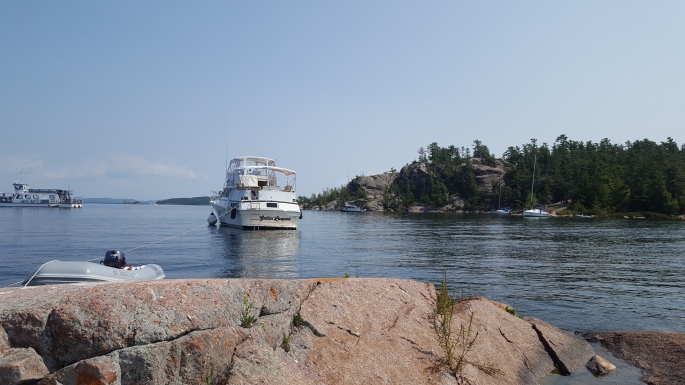 About 3pm, we packed up most of the stuff except the chairs, we left them on “our” island and came back to the boat for a few hours of shade.

About 6pm we went out for a late afternoon dinghy ride around South Benjamin Island.
The water got a little choppy on the west side of the island, but the trip only took about 45 minutes.

There were some other nice locations, but we did confirm, via the dinghy ride, that we had the best anchorage on the island.

After the dinghy ride, we picked up the chairs from our mini-island retreat and headed back to the boat.

We ate dinner between 8-9pm on the aft deck, then retreated into the cabin about 9pm.
We watched another one of our favorites on DVD – The Green Mile with Tom Hanks.

That was about it from South Benjamin Island, maybe the prettiest anchorage for us on The Loop.

Next Stop
Meldrum Bay – the last stop in Ontario before check-in, back into the USA at Drummond Island.