Ugh, there is not going to be much of an update from Little Current.
We arrived Thursday afternoon, Aug 16th.

But after a fun night Thursday night, I was laid up all day Friday with intense stomach pain, and did not leave the boat, other than to use the marina rest room.

So here we go, it’s a short blog.
You can pass on this one if you are busy.

Aug 16 – Thu
After departing our beautiful anchorage at Baie Fine & The Pool, we arrived at Little Current about 1pm on Thursday.

We had an interesting ride under the Little Current Bridge, just before the marina.
The bridge was listed at 18 feet clearance, our boat is 15’2″
The bridge seemed lower than 18 feet.

I called the bridge tender to confirm the clearance, and he said that Active Captain was incorrect, and that the correct clearance was not 18 feet, but is closer to 16 feet.

Humm, do we try it or wait 25 minutes for the next opening ?

I told the bridge tender that I was going to try it, he said “OK, go-slow”.

While about 6 other boats waited for the bridge to open, Gettin’ Looped snuck under with less than a foot to spare, and was the 1st to arrive at the Town Docks. We were given congratulations over the VHF radio by Looper vessel The Journey, watching from behind.

After we arrived at the Town Docks, we washed the boat for a few hours, took some showers, and went into town for dinner at a ho-humm place with so-so food (not worthy of photos).
After dinner, we met 2 other new Looping couples – Dale & Merna from the vessel The Journey, and Larry & Carol from the vessel Sea Life.
The 6 of us went to watch some music at a place called The Anchor Inn Hotel.
We watched an entertainer named “Barry” play everything from Gordon Lightfoot, to Johnny Cash. 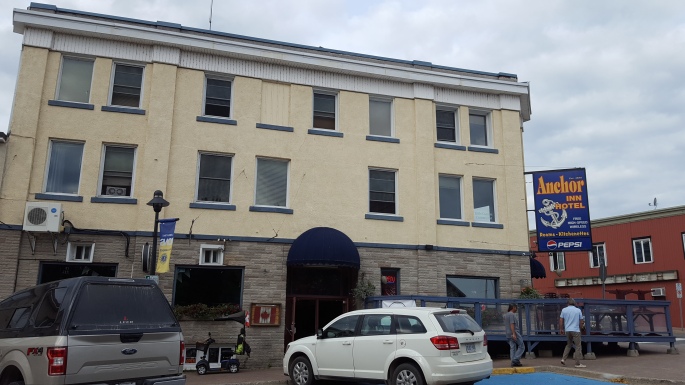 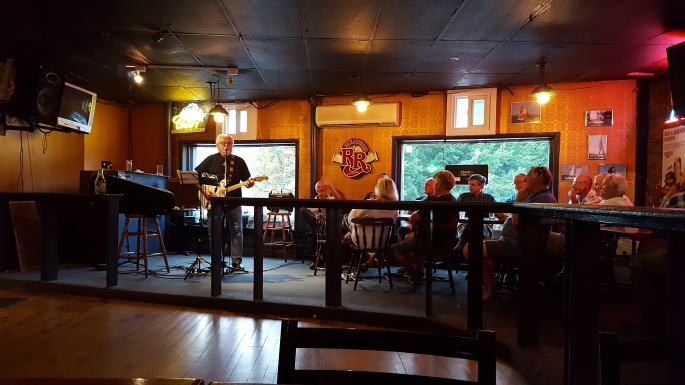 Aug 17 – Fri
I’m not sure if it was the Lasagna for dinner, the Bread Pudding for dessert, the 2 Yeti-Juices upon arrival, the 2 Beers at dinner, or the 2 Captain & Cokes during the music – But something did not go as planned on Friday morning.

I woke up about 3am with intense stomach pain, the pain continued throughout the entire day and into Friday night.
I spent the day laying in bed, laying on the sofa, or on/off the pot.
I will spare you the intimate details.

For dinner, I had a bowl of soup on the boat, Nellie had a sandwich.
We watched about 4 episodes of House of Cards.
That was it for Friday.
Maybe our biggest, wasted day on The Loop.

Aug 18 – Sat
I woke up feeling better, but not 100%
All Systems Not Yet functioning Normally ??

Our morning surprise was a cruise ship in port, which was not there the night before – the Victory I  cruise ship. 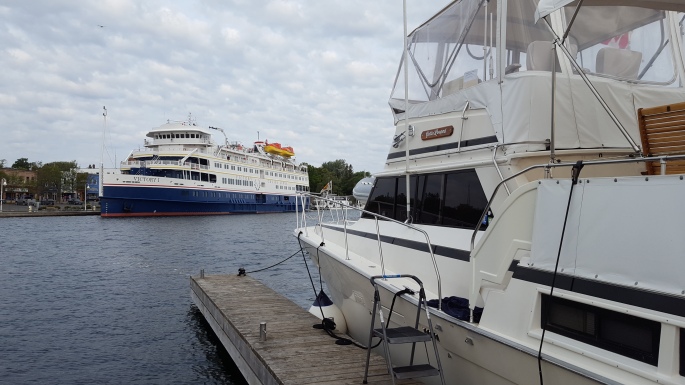 About 9am, I took a shower then headed off for a badly needed haircut.
It was walk in service, the Barber Shop is in the basement below The Anchor Inn Hotel. 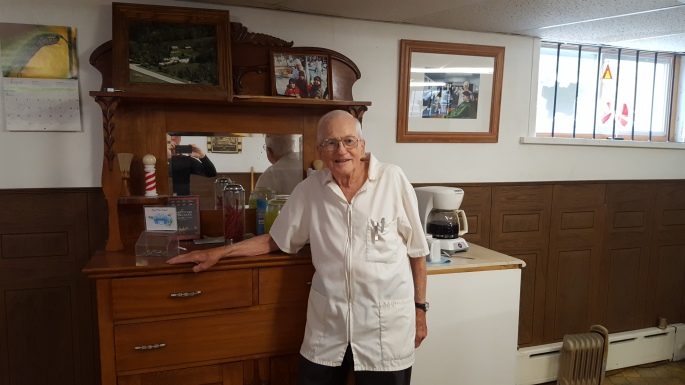 To attempt to get the digestive train back on the tracks, we went to breakfast for some slippery eggs.
Digestive System still in limbo.
Later in the afternoon, we went grocery shopping to restock the boat, prior to our planned anchorage tomorrow night at the South Benjamin Islands.

After groceries, we had Ken the taxi driver take us to a place called McLean’s Mountain Lookout, supposedly the highest elevation on Manitoulin Island.
he views were the nicest we had seen since Grafton Illinois, when we went to the top of the Aeries Resort with Jake & Mollie Baldwin.

We could see the nearby Bedford, Amedroz, and Clapperton Islands off in the distance (places we will see by boat tomorrow). 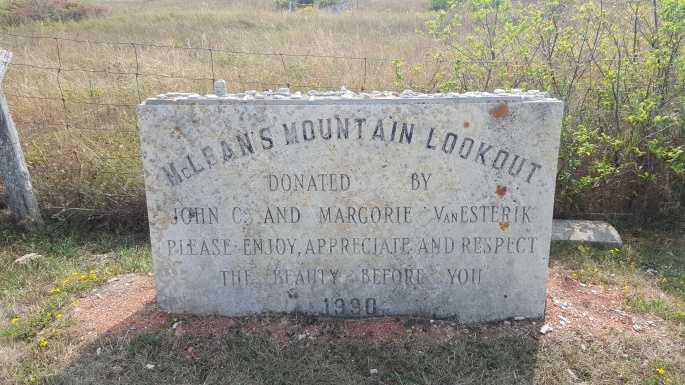 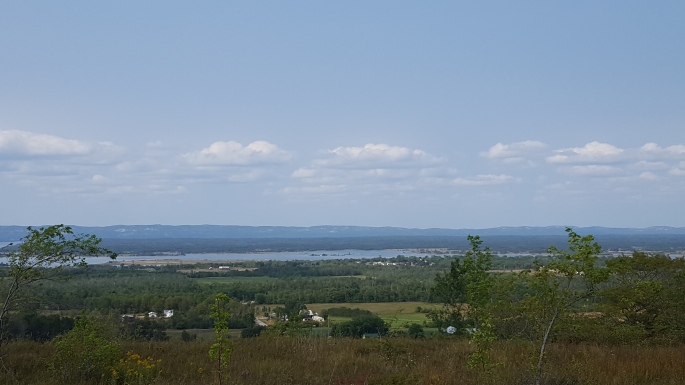 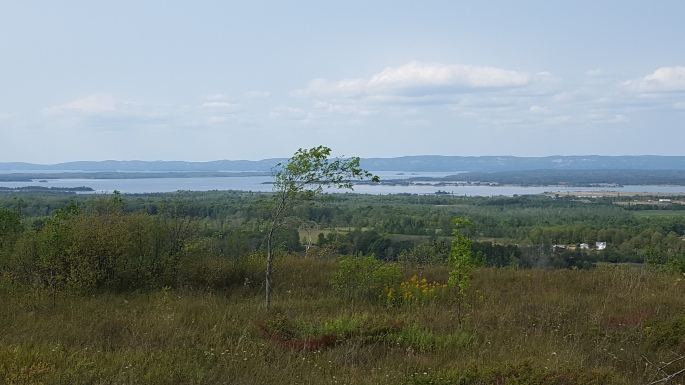 After McLean’s Lookout, we came back to the harbor, and sat out on the seawall under the mandatory shade tree.

We were treated by watching the 6pm departure of the Victory I cruise ship, and it’s passage thru the very narrow swing bridge. 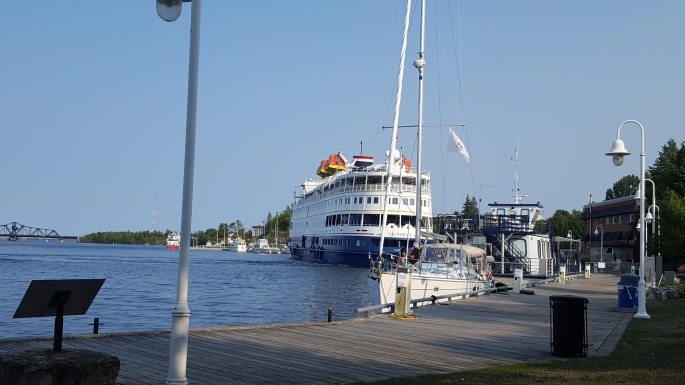 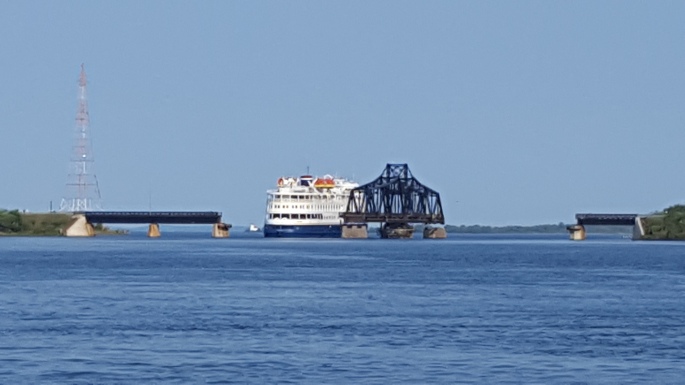 After watching the cruise ship depart, we went to dinner at a restaurant called North 46, within The Manitoulin Resort Hotel.

It was a fairly new hotel, with a beautiful interior lobby and the wonderful North 46 outdoor restaurant on the Little Current Canal. 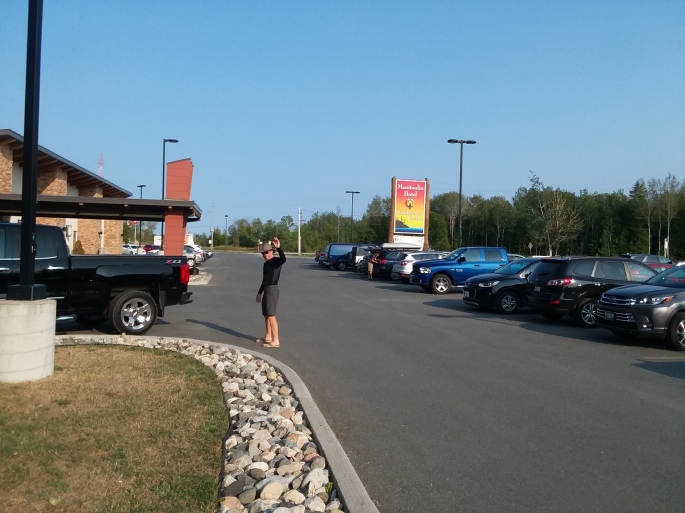 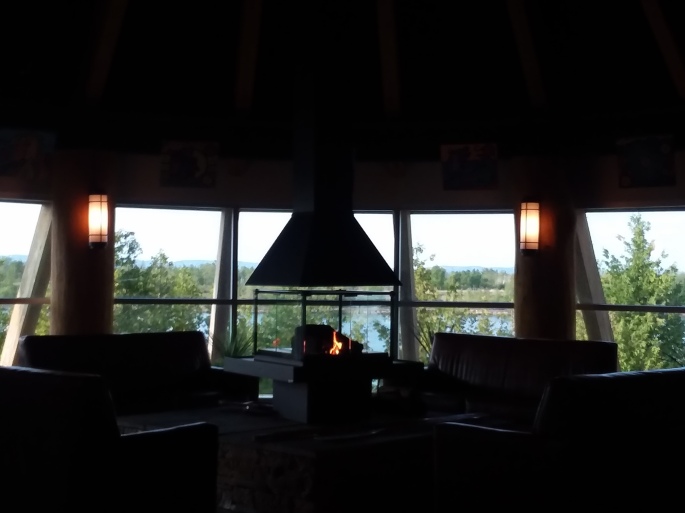 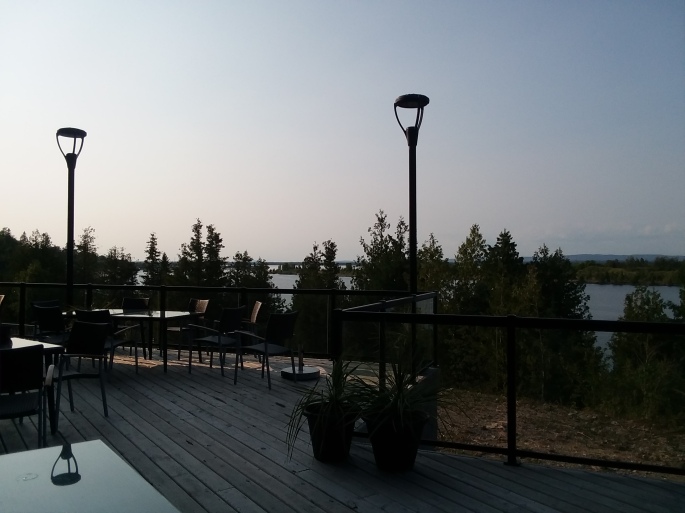 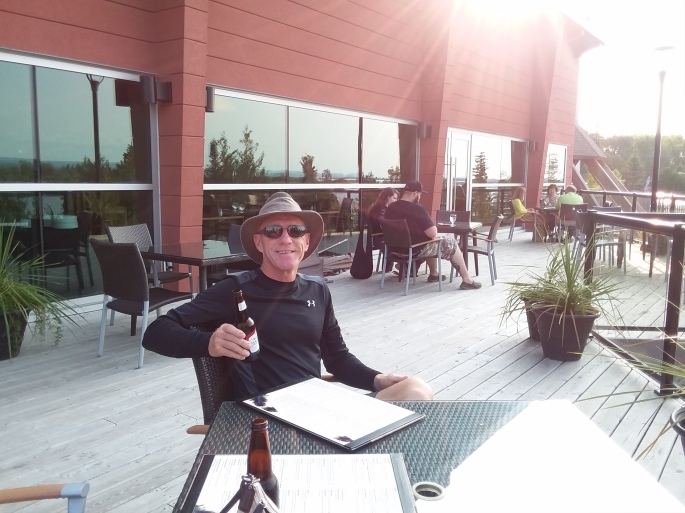 That’s about it from The Town Docks at Little Current Ontario !
BTW – The digestive track is finally starting to feel normal, 30 hours later.

Next Stop
Anchorage at the South Benjamin Island, 20 miles west of Little current, and about 100 miles southeast of Drummond Island. 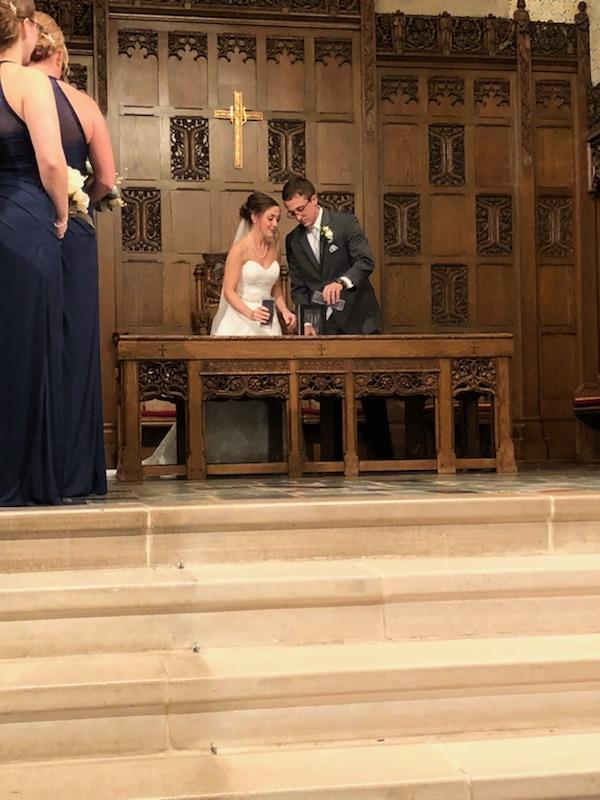