I almost hate to make a post talking about having fun, while the folks in Florida are at high risk and the folks in Texas are still in recovery mode. We ask all of our followers to pray for them all.

Chicago – Many of our followers have been here and know the city well, not so much for me and Jonell.
Lots to do, lots to see, lots to eat/drink.
It truly is a great city in spite of all the national reports on local area crime.
For a reminder on the previous post, we arrived Thursday afternoon and in the afternoon Thursday & morning on Friday, we saw the Riverfront & the Sears/Willis Tower.

On Friday afternoon, my brother Kenny & girlfriend Carla came for the weekend. 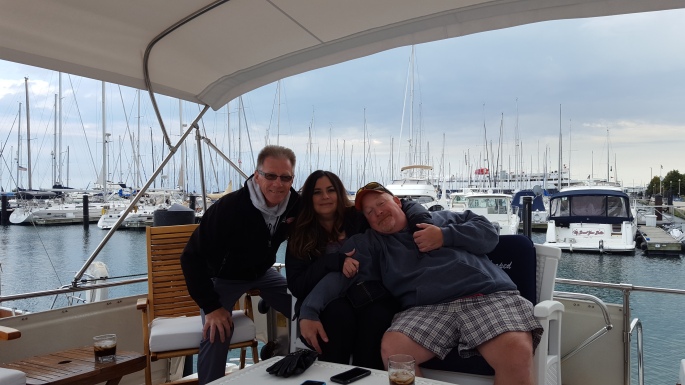 We took the Water Taxi so Kenny & Carla could see the Riverfront, but make it a quicker process than walking. 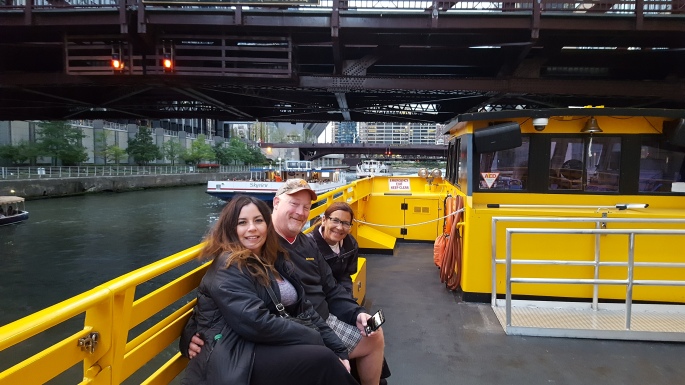 We then went to Navy Pier and had dinner at Harry Carey’s Tavern. 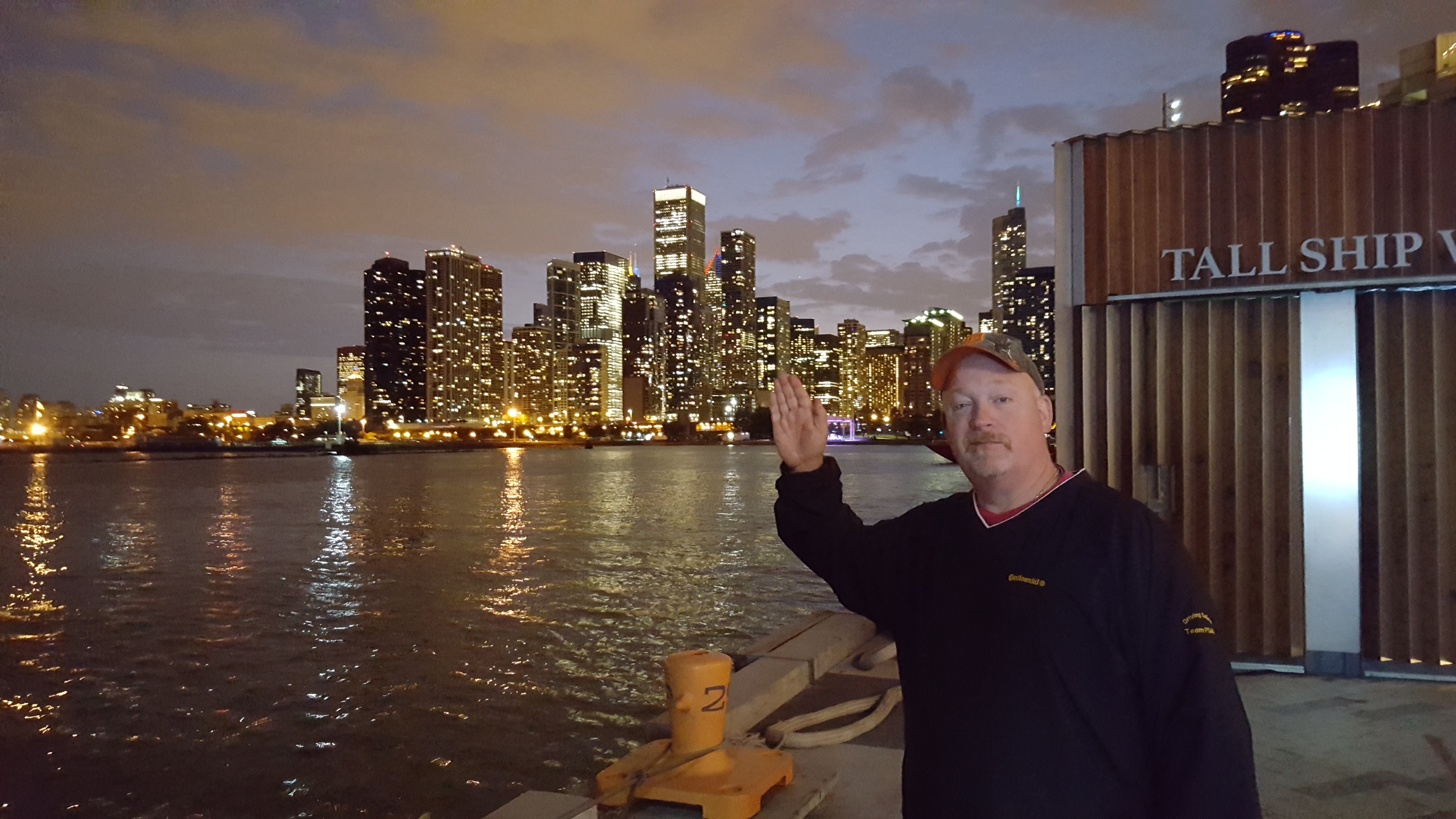 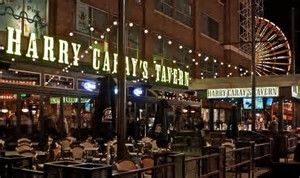 On Saturday morning , we went on a ballpark tour at the historic Wrigley Field, 2nd oldest park in the country next to Fenway in Boston. 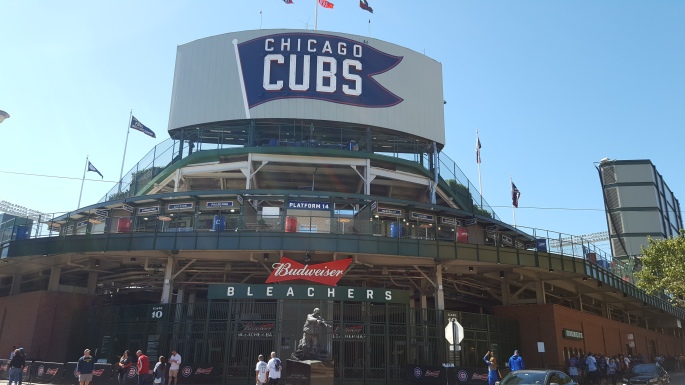 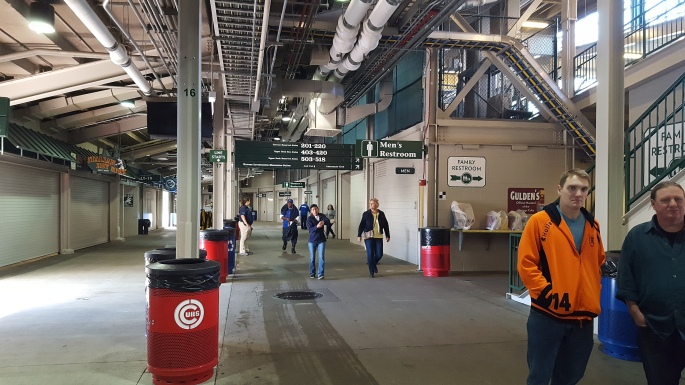 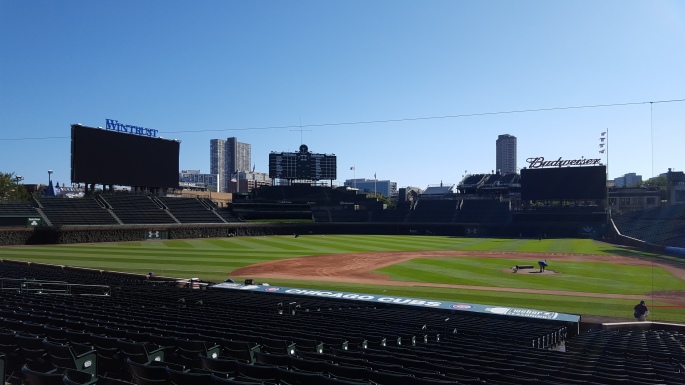 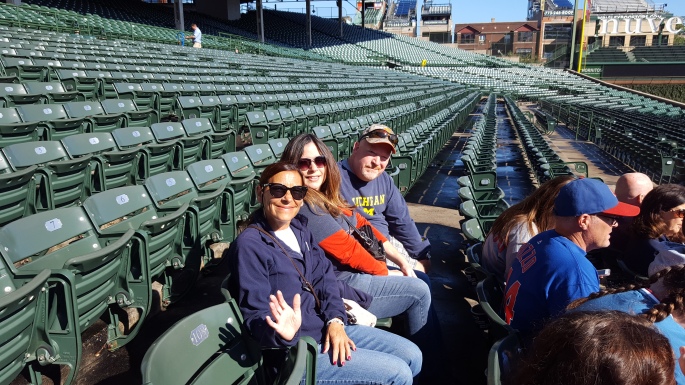 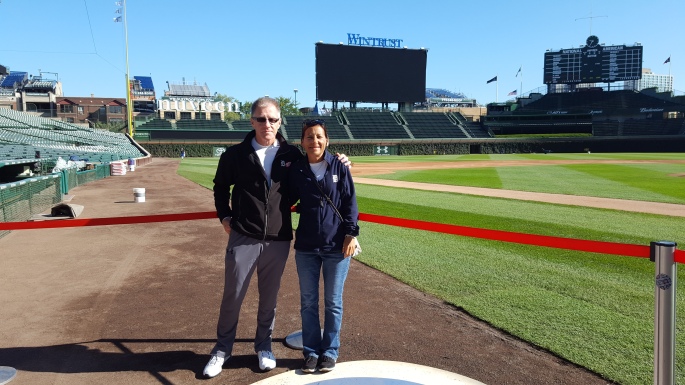 After the tour at Wrigley, we went to lunch at the local bar “Bernie’s Tap & Grill”, recommended by the Wrigley tour guide Clay.
We then came back to the boat and met amateur photographer and Chicago native David Tucci. David works at a local second tier TV station (channels like Me TV), is married, and has a 2 year old son.
Strange Story – David enjoys taking rustic/rural/industrial photography (like the ole train station in Detroit). He has always wanted to shoot the abandoned industrial sites on the river south of Chicago, but the tour boats do not go down that far. David stumbled upon our blog and contacted me about a potential ride. After significant initial reservations & an initial “feel out” phone call, we agreed to meet each other to see if we were compatible. We agreed that David would give us a tour of his local town, give us some of his finished photos, and we would give him the ride between Chicago & Joliet.
Thus started the David Tucci Tour. 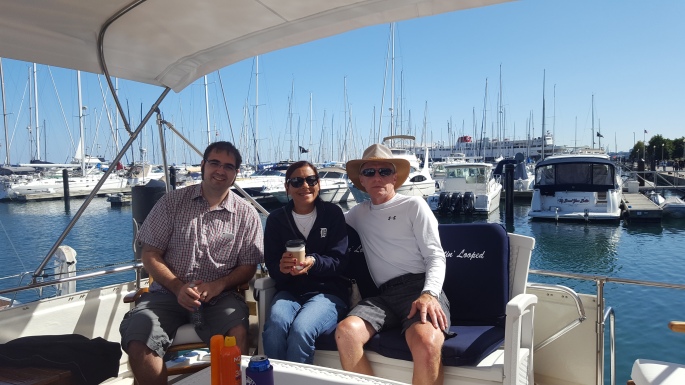 We met at the boat about 2pm, David 1st took us to Daley Park.
Daley Park has a beautiful walkway between the marina & Millennium Park. The walkway was built with a Styrofoam type base material to make the hilly terrain, then covered with dirt and grass. The walkway also includes curved path areas for roller blading in the summer and ice skating in the winter. There are also several rock climbing walls along the path. 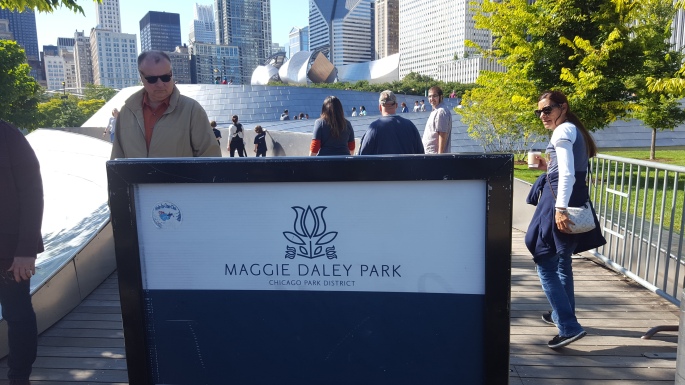 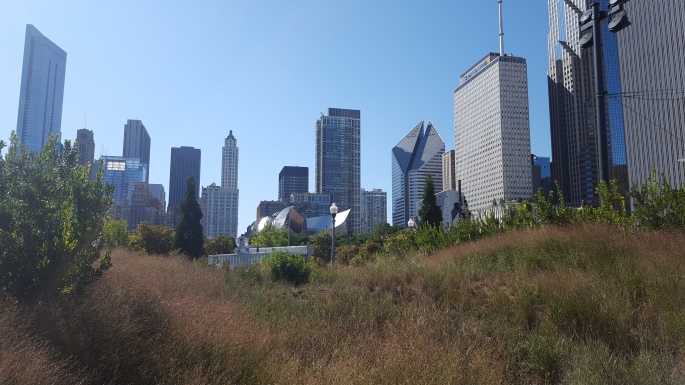 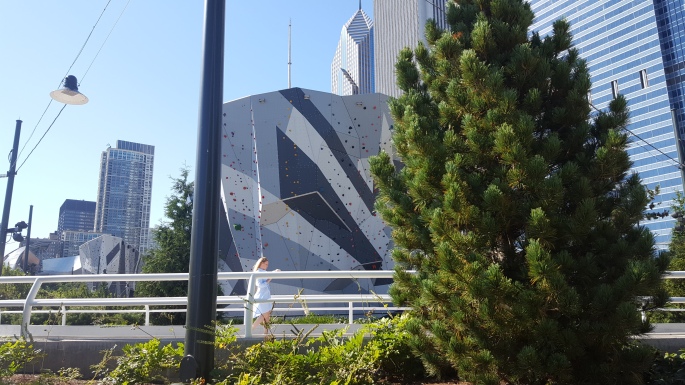 The next stop was Millennium Park, and a visit to the iconic Cloud Gate Sculpture (aka-The Bean) created by Indian-born British artist Sir Anish Kapoor. 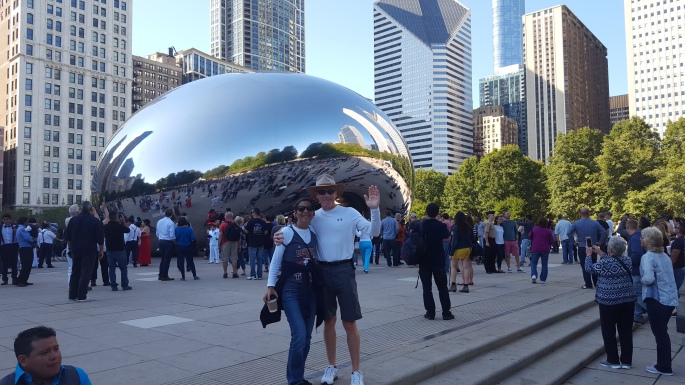 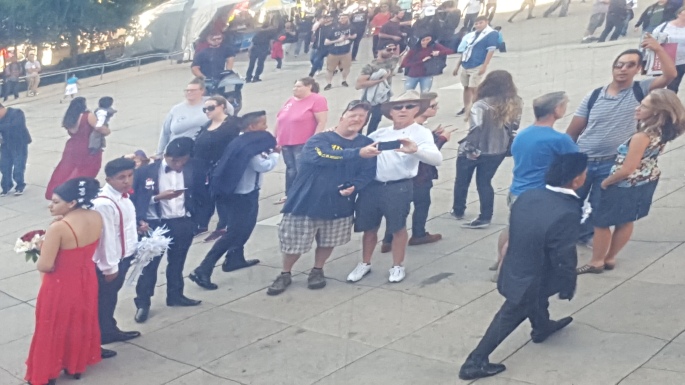 The walk thru Millennium Park also included passing by the very large Jay Pritzker Pavilion, where there was a live concert of some very strange music. The structure is pretty stunning in size. 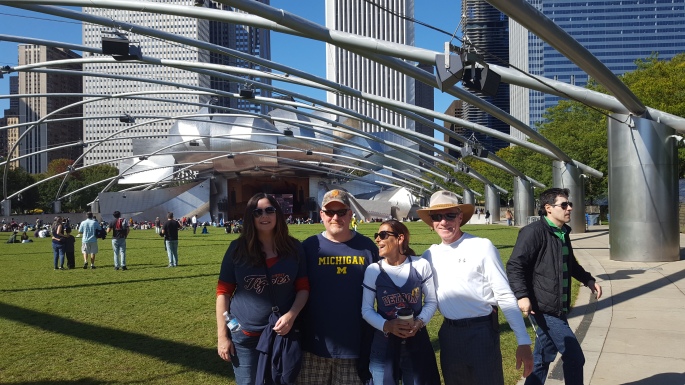 After Millennium Park, we went to the Crown Fountain (Face Fountains). The fountain is composed of a black granite reflecting pool placed between a pair of glass brick towers. The towers are 50 feet tall, and they use light-emitting diodes to display digital videos on their inward faces. The intent of the fountain is to show the diversity of Chicago, with the faces changing ethnicity every few minutes. 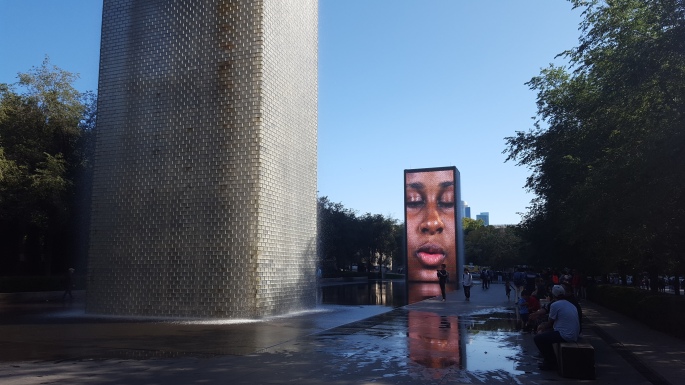 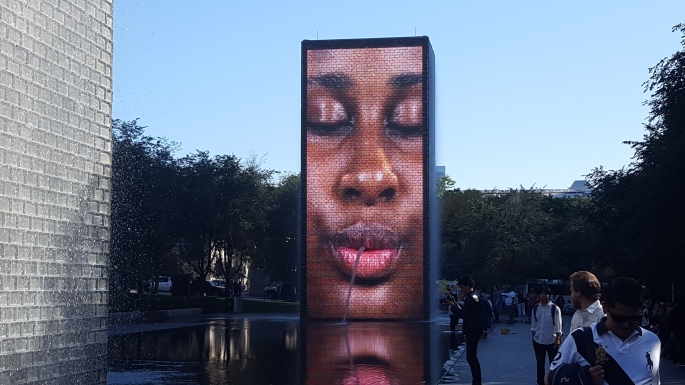 The next stop after Millennium Park was China Town, including visits to a few of the trinket shops & a few China town fruit smoothies (they were very yummie !). 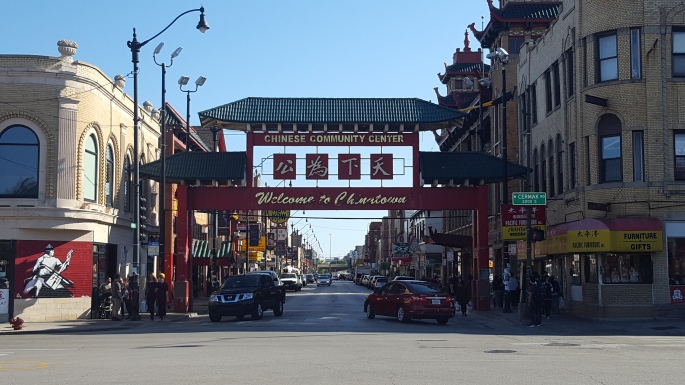 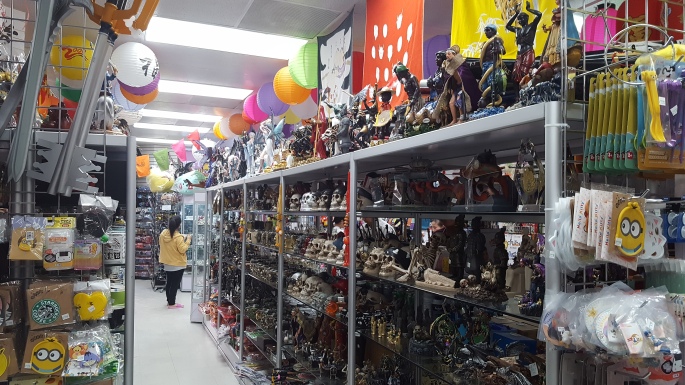 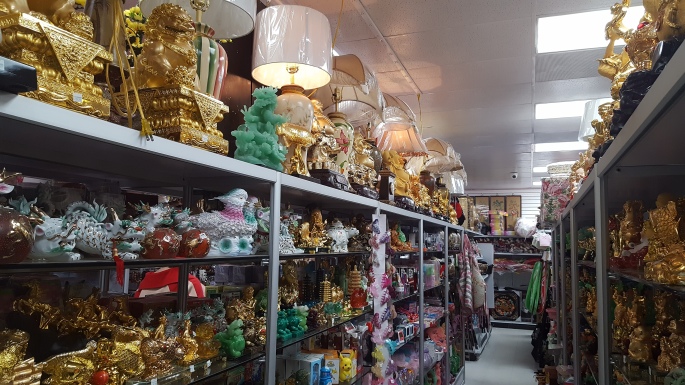 After China Town, we returned to the boat, said farewell to David, had a few beverages, and cleaned up for the night. We went to dinner at the Chicago famous “Lou Malnati’s” restaurant for Deep Dish Pizza. 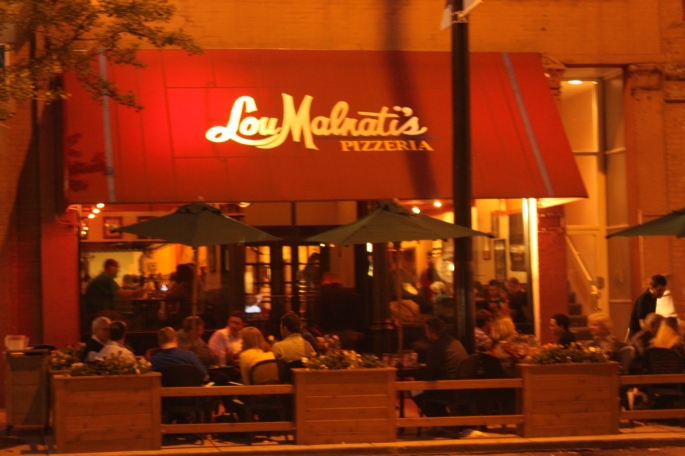 The night ended with some Jazz at the Chicago landmark “Green Mill Cocktail Lounge”.
The Green Mill has history of an old mob lounge. The story says that during the Prohibition era, Jack McGurn of Al Capone’s Chicago Outfit became a part-owner. Singer and comedian Joe E. Lewis was attacked by McGurn’s men in 1927 after he refused to take his act to the Green Mill. Lewis’ throat was slashed, but he survived. The incident inspired the 1957 film The Joker Is Wild.
Al Capone’s favorite booth is still in the establishment located directly west of the short end of the bar. Capone and his men would sit here because it afforded clear views of both the front and back entrances to the establishment.
Note – Detroit does have Chicago beat in this one area, Baker’s Keyboard Lounge in Detroit is the oldest Jazz Club in the USA, and in my opinion the music is better. 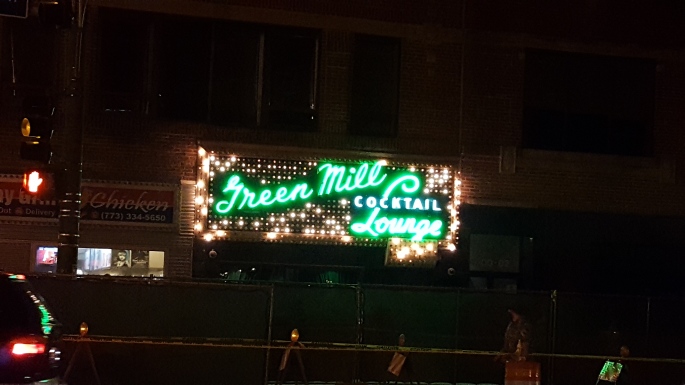 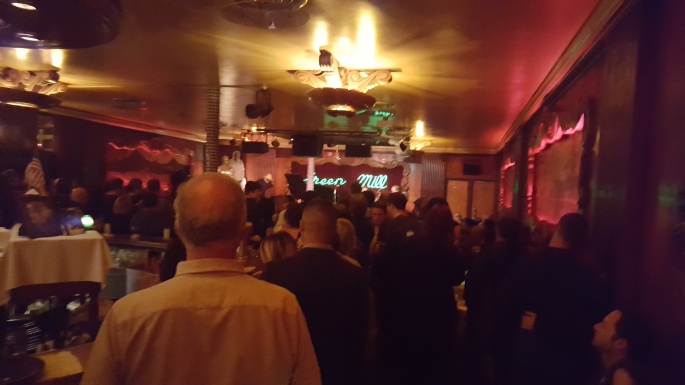 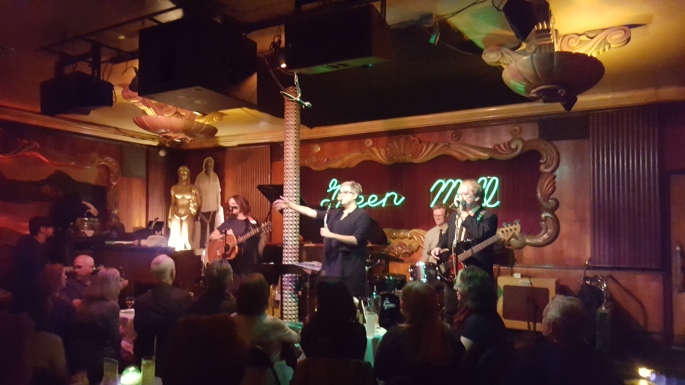 That’s it for the whirlwind Chicago tour.
The Kenny/Carla visit made it a great weekend.
We are tired, time for bed.

Tomorrow is a big day = Entering the Chicago River Lock and traveling thru downtown Chicago by boat to Joliet Illinois (40 miles).