Hey Blog Followers,
We left from Chicago to Joliet Illinois on Monday, and to Ottawa Illinois  yesterday.
The 2 days were a whirlwind start to the river system boating.
The travel days were very long (9-10 hours) due to extensive waits at the various locks waiting for passage.

The summary for Chicago to Joliet to Ottawa is as follows;
Downtown Chicago = Awesome, everything we expected
Industrial Chicago & Northern Illinois = Commercial Plants & Graffiti
Undeveloped Northern Illinois (Chicago to Joliet) = Serene, Quiet, Calm
Barges/Tugs = Barges Blocking the River & Yikes, Get out of the way !
The Electronic Fence for Asian Carp = a non-event
The Locks = Fun, Cool, Engineering Marvels

Downtown Chicago
The trip thru downtown Chicago was breath-taking.
Sky Scrapers, Magnificent Skyline, & Low Bridges !
The Michigan Avenue Bridge (the 3rd bridge from Lake Michigan down the Chicago River) is a 17ft clearance bridge, our vessel height is 15ft/2in. 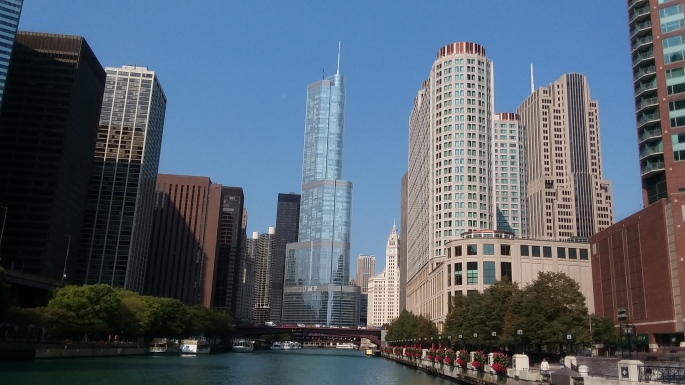 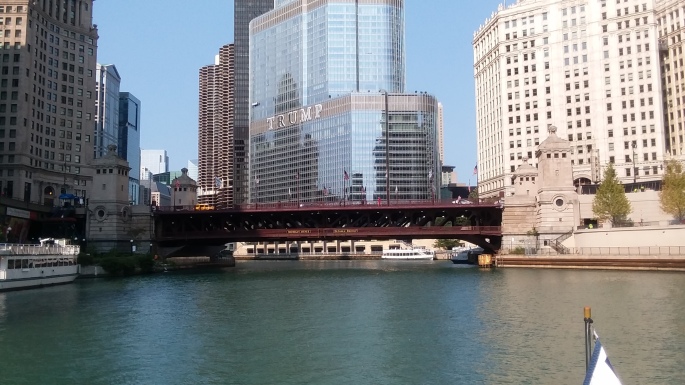 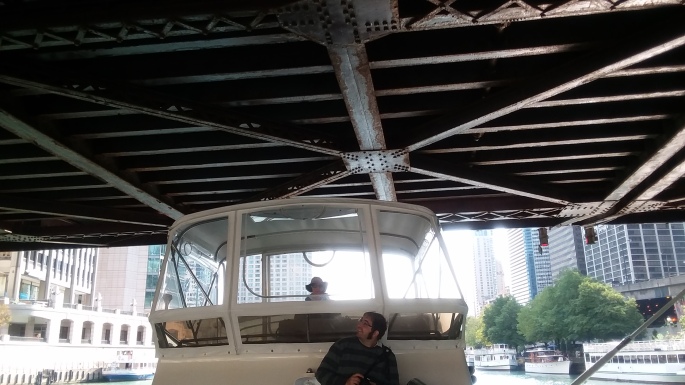 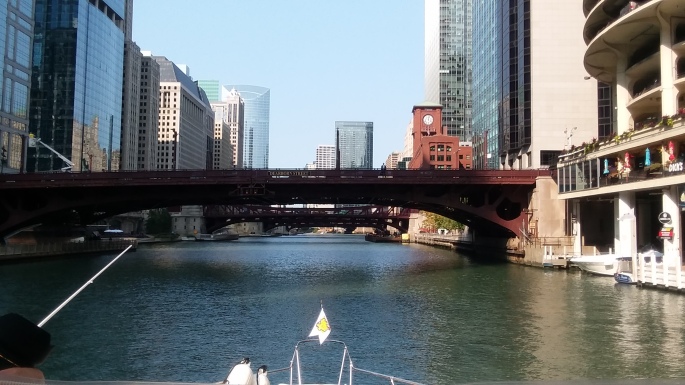 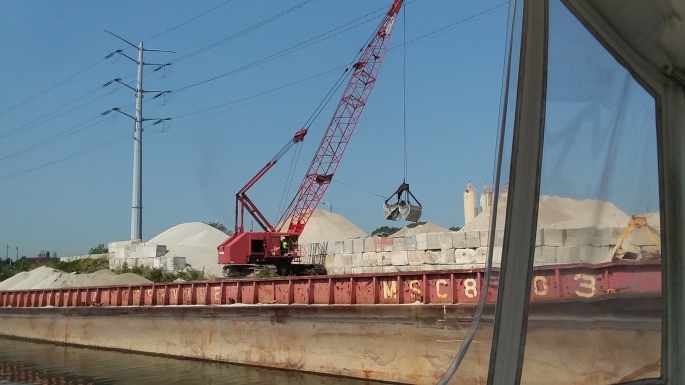 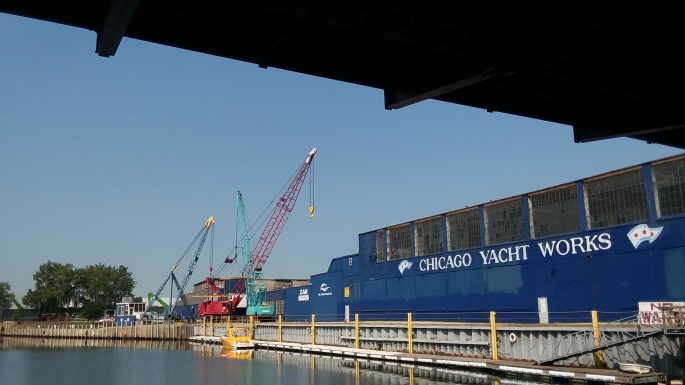 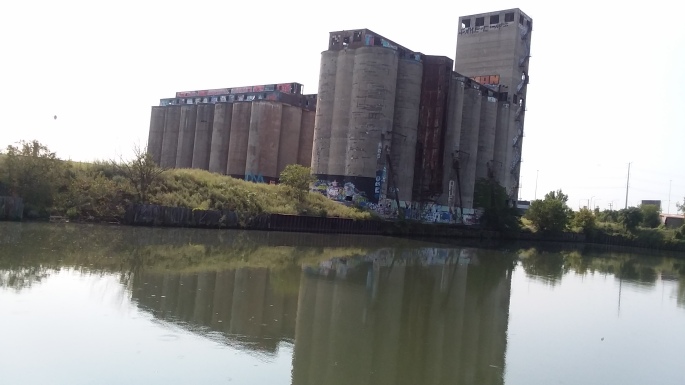 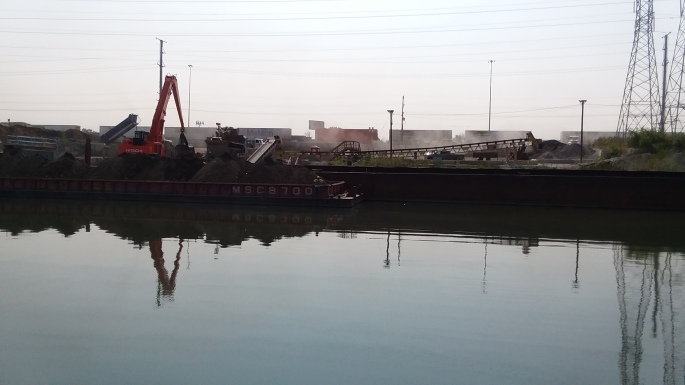 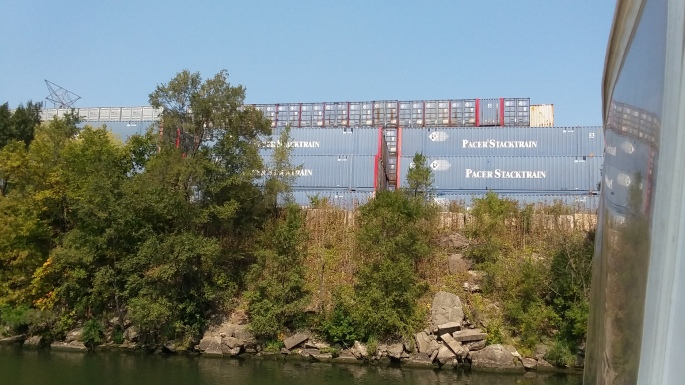 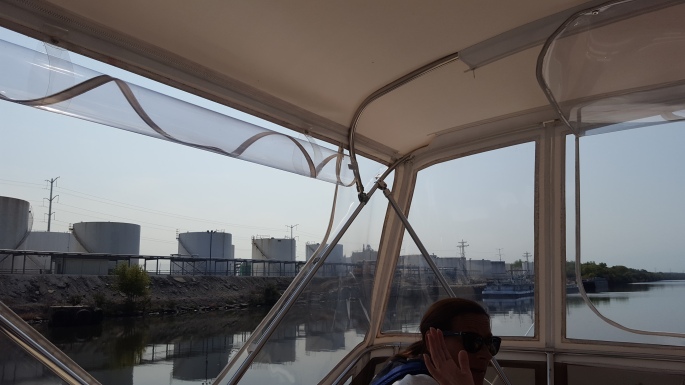 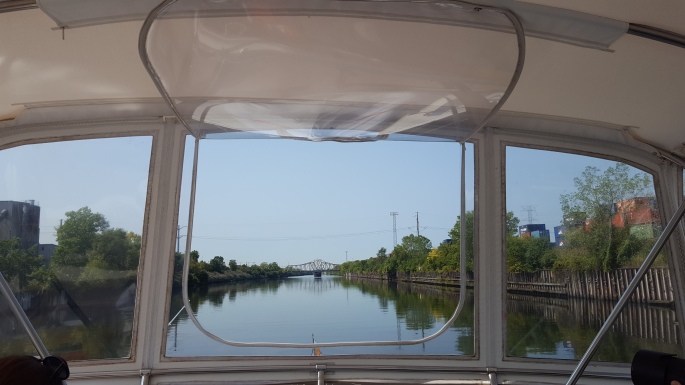 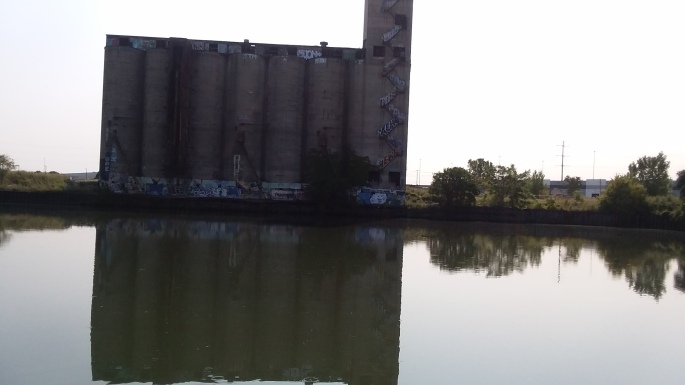 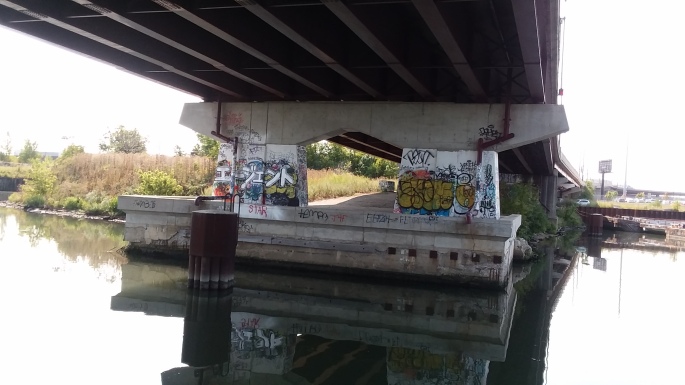 Undeveloped Northern Illinois (Chicago to Joliet)
After passing thru a significant amount of industrial/commercial land, the surroundings turned very serene, quiet, and pretty. Beautiful vegetation lined sections of river, with some sections becoming a little narrow. 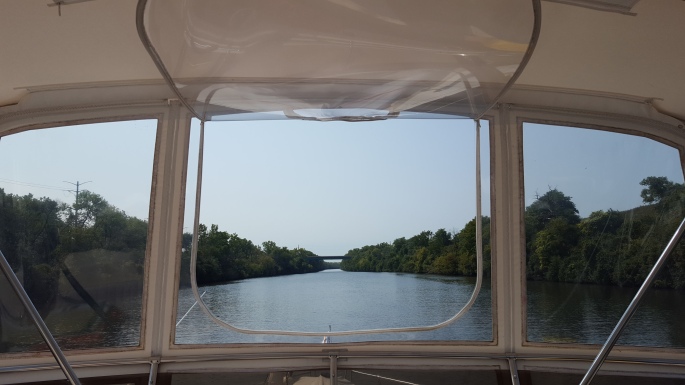 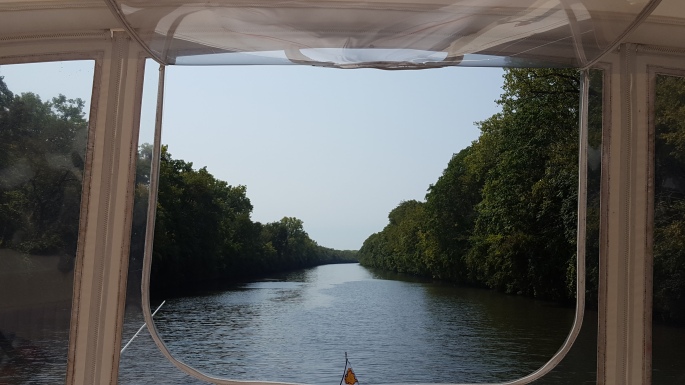 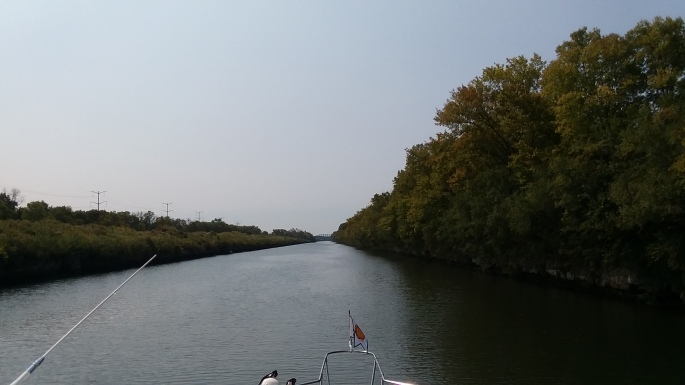 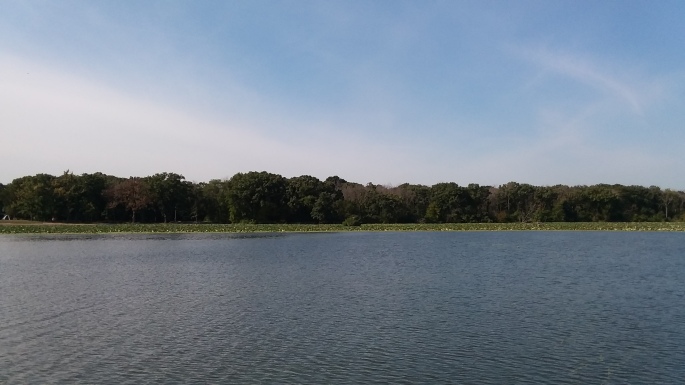 Barges/Tugs
The quiet/serene setting ended as we started to approach Joliet Illinois. The pace picked up significantly with lots of barges blocking the sides of the Illinois River, and lots of tugs wanting to move those barges. Slightly stressful for the captain of Gettin’ Looped, but also really cool to watch up close. 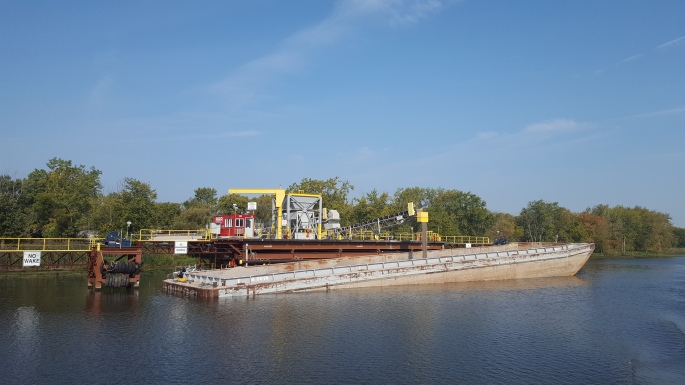 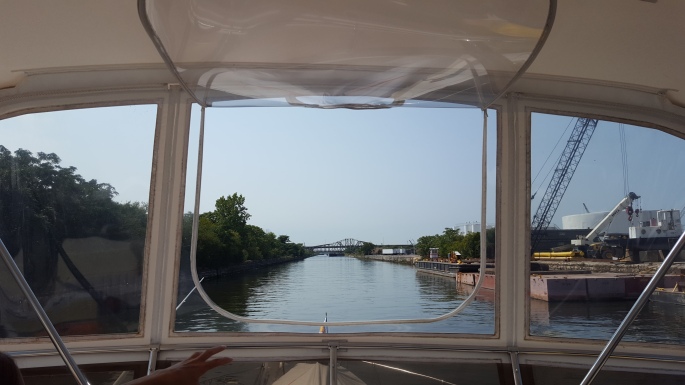 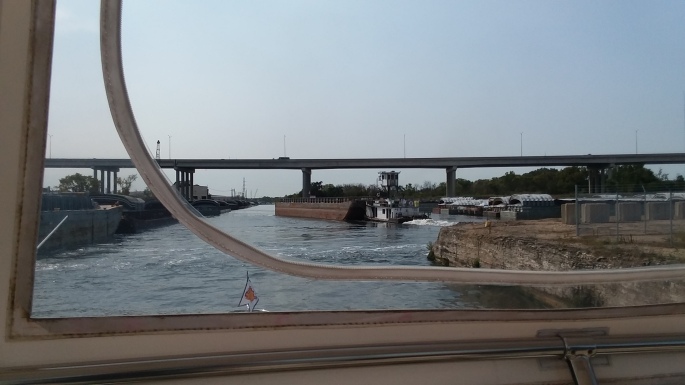 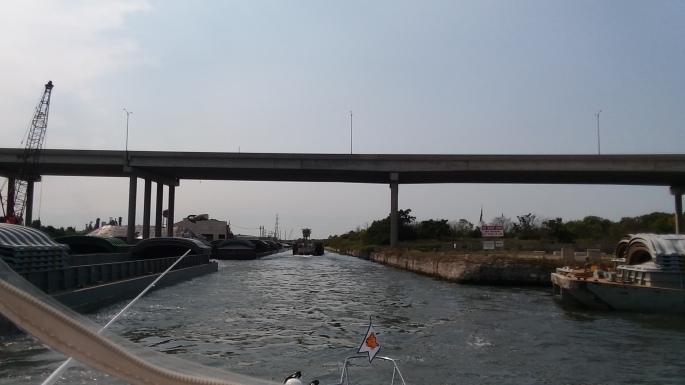 The Electronic Fence for Asian Carp
The electronic fence is an electrical barrier used in the attempt to protect the Great Lakes from Asian carp that are moving up the Mississippi river. The Chicago Sanitary and Ship Canal Dispersal Barrier stretches two rows of electrodes across the canal (approximately 220 feet apart) to create an Asian carp fence. The electrodes pulse direct current into the water; this causes the fish to turn back rather than pass through the electric current. The fence was built in 3 phases between 2002 & 2011. The reported results have been mixed, and the Chicago Sanitary Canal engineers have also resorted to chemical treatments to deter the Asian carp.
For us, the passing was a non-event.
If the signs were not posted, we would not have known that we had entered or exited the zone.
We have not yet seen any Asian Carp jumping, but hear from other Loopers that we may still see that phenomenon near Henry or Peoria Illinois. 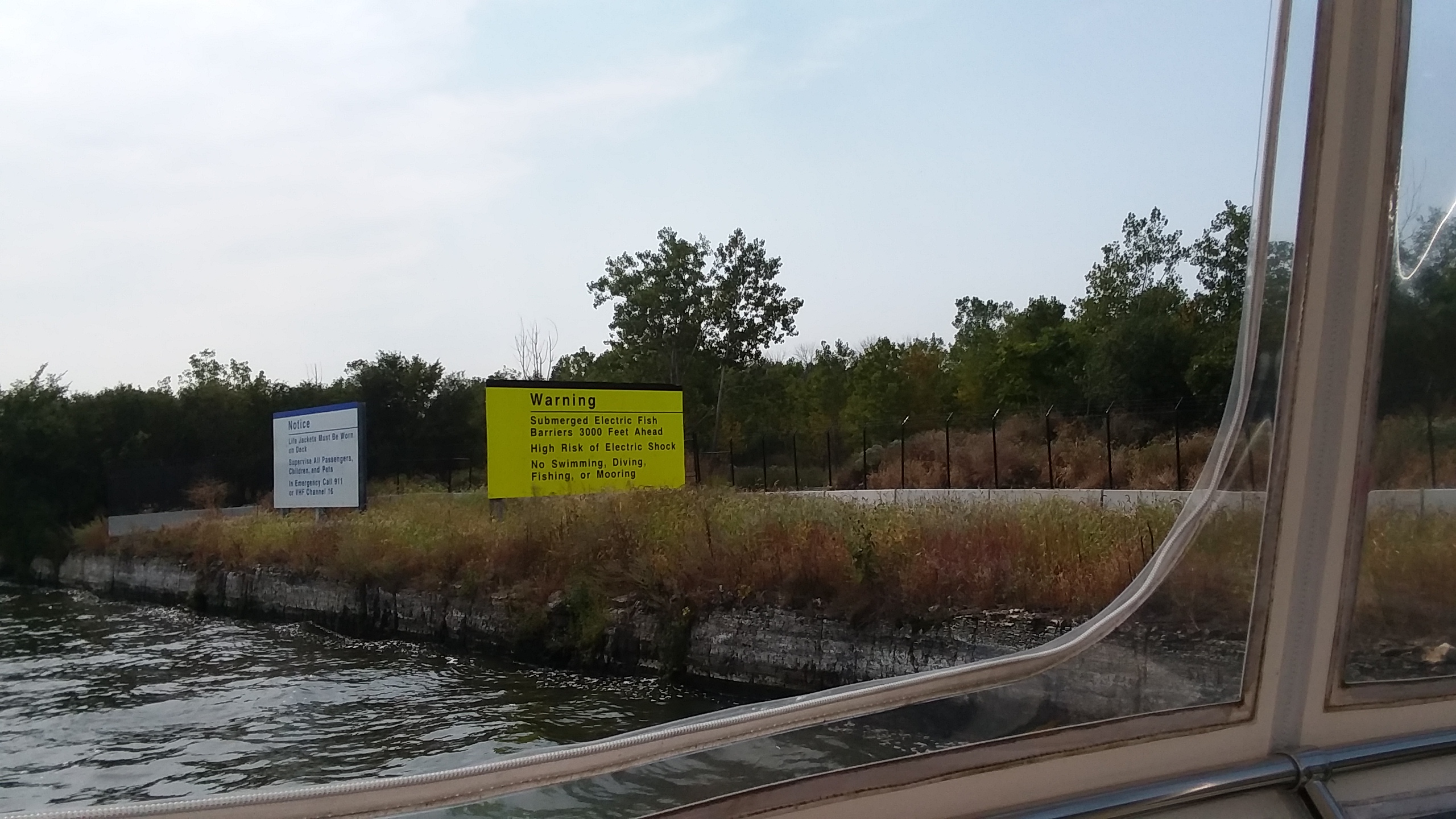 Locks
From Chicago to Ottawa, we have went thru 5 Locks so far.
Jonell & I had previous experience going thru locks with other Loopers in 2014, while we were dreaming about becoming Loopers.
But watching someone else take their boat thru a lock with 4 sets of hands vs taking your own boat thru a lock with 2 sets of hands, is a little different.
The nerves were up a little, but all 5 locks have went off without a hitch.
I have become pretty good at the approach to the attachment bollard (a post on the lock wall) & Nellie has become very good at getting the line around the bollard & on the cleats before wind/current have their way with the boat.
We also have experienced rafting to another boat & being rafted off of.
While tied on the Joliet wall, we became friends with Leon & Karen Scott from British Columbia Canada. They were our rafting friends in 2 of the locks. 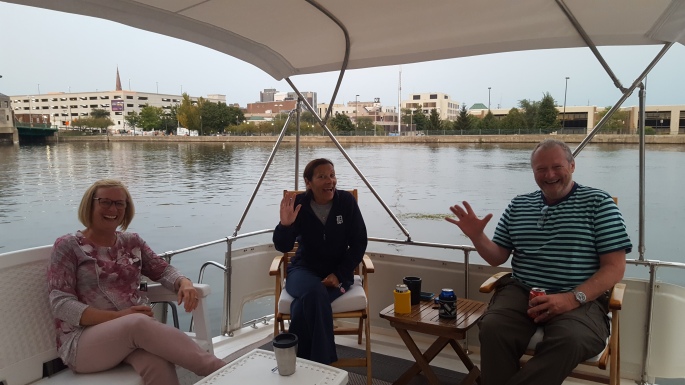 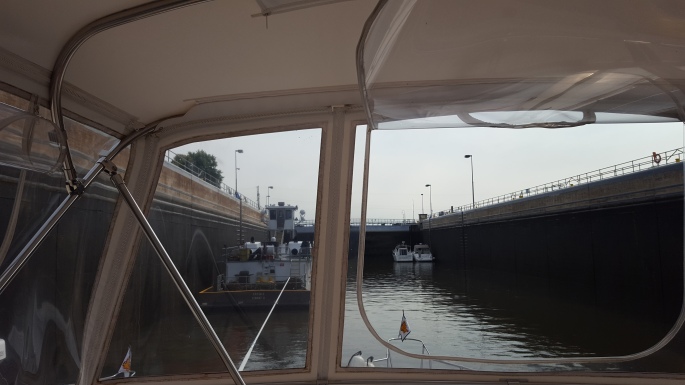 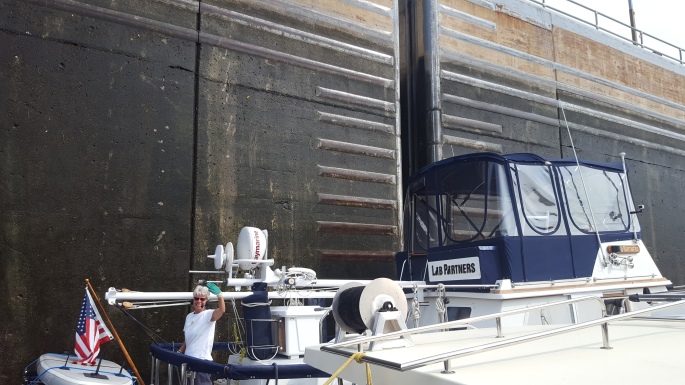 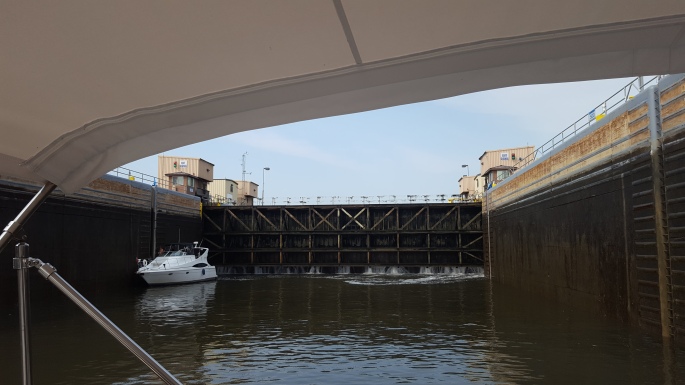 Next stop will be Henry Illinois, where we will anchor for the night.
Probably no internet, so there may not be a blog update until this weekend at Peoria.
Thx for following.