We departed the Lighthouse Point Yacht Club about 8:30am Friday morning.

Prior to departing, we had a last night goodbye dinner with Jodee & Dean at the Lighthouse Point Restaurant, out on their back patio overlooking the marina.
I initially felt bad talking Jodee & Dean into the Lighthouse restaurant when I opened the menu and saw entrée prices starting at about $35 and going up to $75. I kept flipping the menu to find the sandwich/burger page, but was unsuccessful. My Visa card stopped buzzing when the waitress advised that they had 3 specials that day; a Turkey Thanksgiving type special, a Prime Rib, and a Chicken dinner, all for $23.
Nellie had the Turkey dinner, Jodee, Dean & I had the prime rib. The dinners were awesome. Dean also had the $6 martini special. It turned out to be a great dinner in a great setting. We ended the night with some drinks and TV (Red Wings Hockey)  on Gettin’ Looped.

Mar 23 – Fri
Friday morning The ride from Lighthouse Point to our next destination of The Loggerhead Marina Palm Beach Gardens in Jupiter Florida was about 42 miles and we had to go under 17 bridges, of which we had to wait for about 5 bridges to open. Most of the bridges are on a set schedule and open on the hour/half hour or on the quarter/3 quarter hour. Some bridges open only on request, and any bridge that opens for you usually requests your vessel name for their log.

During the ride, as we started to approach West Palm Beach Florida, we noticed that the waterfront homes on the shore were starting to get a little nicer & larger. 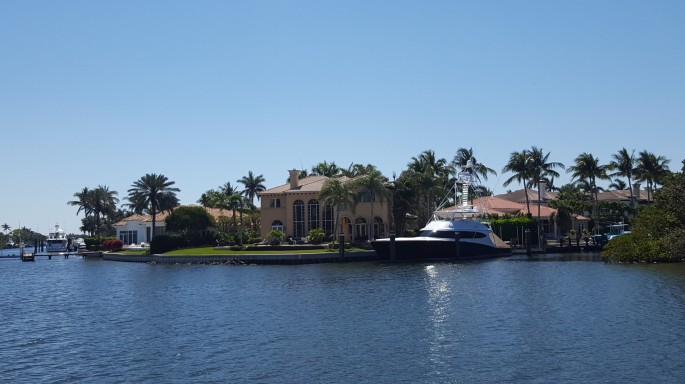 During the ride we also passed thru West Palm Beach. I had tried to get into the marinas in West Palm a few weeks ago but was unsuccessful due to the West Palm Boat Show. As we passed West Palm there was a lot of boat traffic, lots of police presence in the water, and we got a small glimpse of the large boat show.
We also learned later that President Trump was coming into Mar-a-Lago that afternoon, just south of West Palm Beach.

Just north of West Palm Beach, we passed a small Island called “Peanut Island” (shout out to Randy). The island is surrounded by beautiful aqua blue water, and the boats can pull up to shore with their bow, but the water deepens very quickly to over 10 feet within a boat length. I’m not sure how/why the water changed color from drab blue/green to vivid blue so quickly, I don’t know if the rich people in West Palm pay extra taxes for Aqua Blue Water. 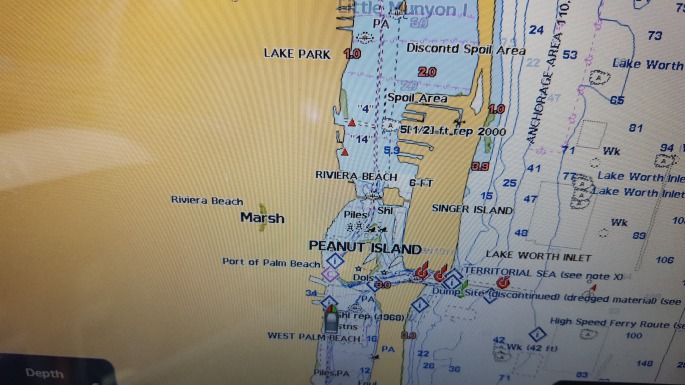 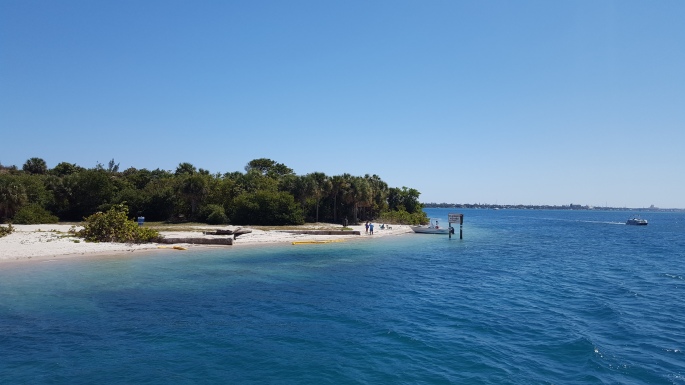 We arrived at The Loggerhead Palm Beach Gardens Marina about 2:30pm.
Ho-Humm, another beautiful marina complex. 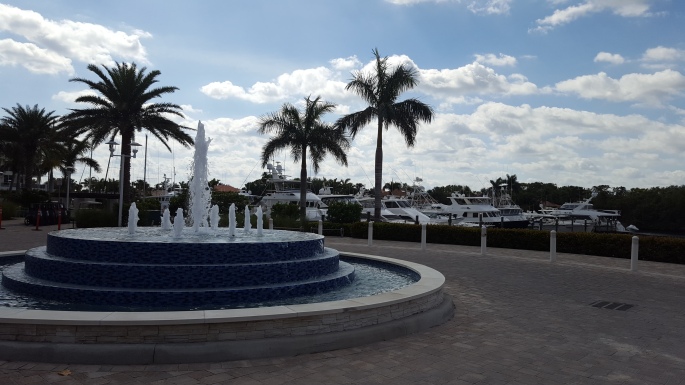 Mar 24 – Sat
Saturday morning we rode the bikes about 2 miles to the Loggerhead Marine Life Center, where they were having a once per year event called “Turtle Fest”. Turtle Fest is a fund-raiser with many tents of folks selling stuff with the profits going to the turtle hospital charity. There were also games, bands playing all day, and food. And of course there was a lot of educational stuff about the work they were doing helping damaged/sick turtles recover. 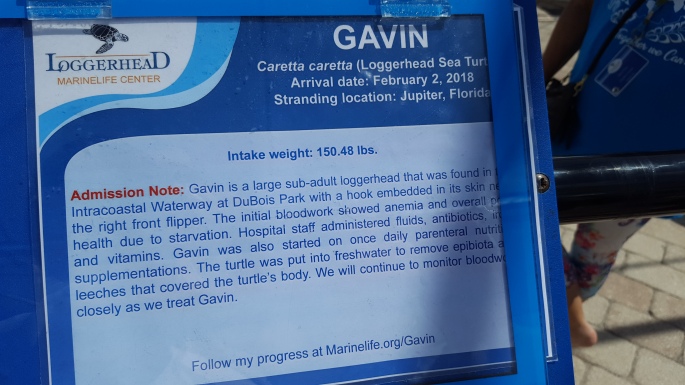 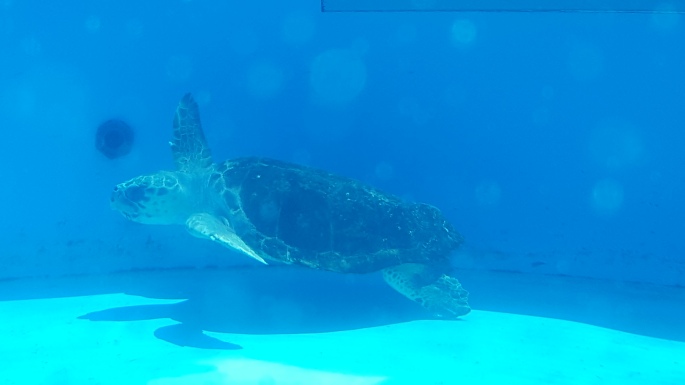 After Turtlefest, we returned to the boat, had some lunch, and watched the PGA Dell Technologies Match Play Golf, with one eye closed (nap time is very healthy).

About 4pm, we headed out for an early dinner.
We went to a shopping/restaurant complex called The Harbourside Place. We had been told by some locals about a car show & music the last Saturday of every month. Harbourside Place is a large complex right on the ICW with lots of restaurants / bars / shops, surrounding a large entertainment amphitheatre with fountains.
We had dinner at a place called The Calaveras Cantina, a very colorful place decorated with the theme of skeletons, with the name Calaveras meaning Skulls. The food was great. We had tacos for dinner, they had 9 choices of taco fillings. I had 3 tacos ; Mahi, Andouille Sausage, and Shrimp ! 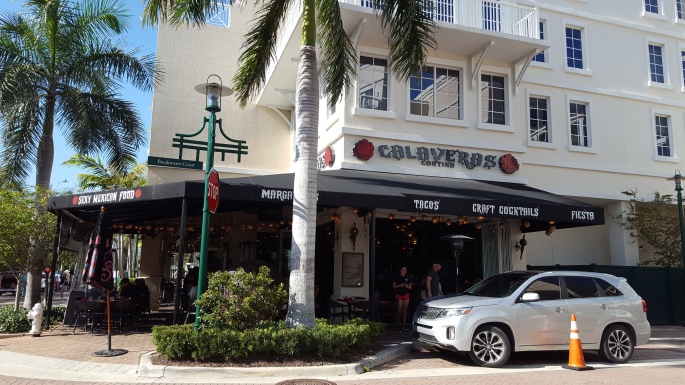 After dinner we strolled around the car show being put on by The South East Classics Car Club. Lots of nice metal on display, with a lot of Mopar based products. Thinking of my cuz Tony Chesney (sorry, there were no ’63 Chevy Impalas to take photos of). 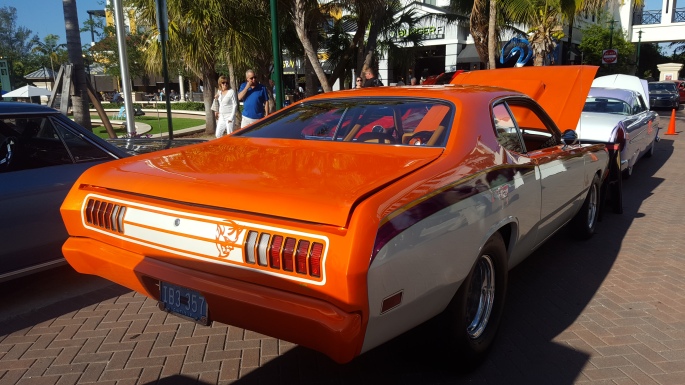 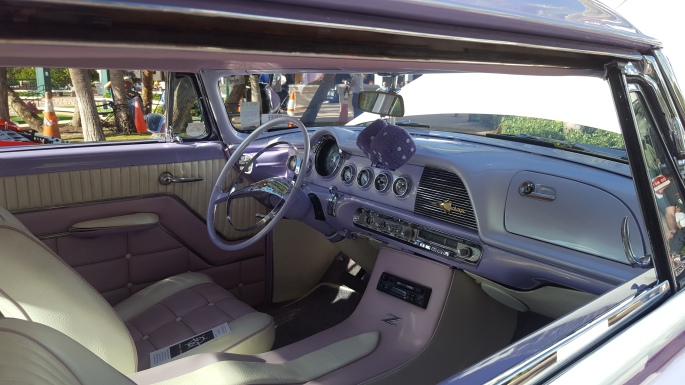 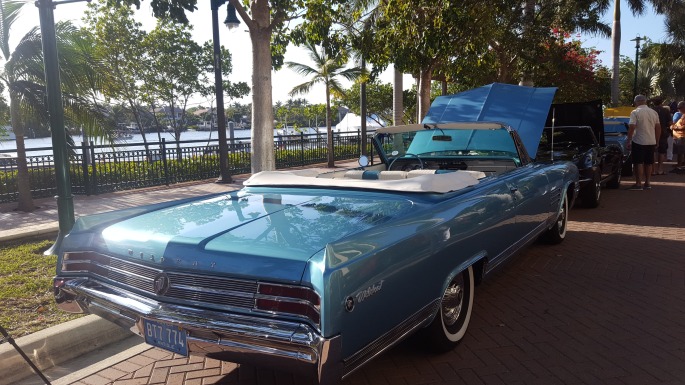 After the car show, we got settled in some seats in the amphitheater before the crowd gathered. We watch the young children play in the fountain. I told Jonell that I wished that I could have that care-free / no responsibility fun of a child again, she said “you are, stop whining”.

After the concert, we returned to the boat about 9pm and watched The Michigan Wolverines defeat the Florida State Seminoles in the Elite 8 championships, Go Blue (I didn’t go there, but I wrote many checks for Ashley, so I guess the many checks represent Go Green) !

Today on Sunday, we will get pumped out (the holding tanks, not our stomachs), spend most of the day by the pool, and prep for travel to Vero Beach tomorrow. Vero Beach will be a long day, about 60 miles, with 12 bridges, but we should be able to pass under all 12 bridges without opening.

Have a good Sunday all you blog followers.

Congrat’s to The Spraggs, who apparently had an awesome retirement party last night.
There were several texts sent last night, showing all the fun we missed !
Jonell & I were represented by Dan & Megan.