Jul 13 – Fri
Cute as a Whistle !
That is the phrase today for Waterford New York.

We had only an 11 mile ride today, from Albany to Waterford New York.
I planned a short trip because in Waterford there is a “Visitors Center with Free Dockage, water & 50A power”, so we wanted to arrive early to try to get a spot on the Free dock.

We arrived about 10:30am and snagged our spot on the floating docks along the Mohawk River, just before Lock #2 and the entrance to the Erie Canal.

There are no dock hands, it is 1st come / 1st serve, and you do your own docking & tying up (for example, at the last marina in Albany, we paid $90 for the luxury of having a dock hand help get us tied up).

After gettin’ tied up and connecting the power & water, we went inside the visitors center to register. We met office worker Barb, she is sweet as sugar & reminded me of my aunt Angie by the way she looked and talked. The town of Waterford is very small (8500) & our short initial walk thru town also found many very nice people all saying hello, reminding me of folks earlier on the trip in Mississippi, Alabama, and Tennessee.

So it is officially Farewell to The Hudson River & Hello to The Erie Canal.
The Hudson River was wonderful, exciting in New York City, and beautiful and peaceful in upstate New York.

Over the next 10 days we will travel thru about 25 locks on our way to Lake Ontario. On Sunday we will travel only 37 miles, but go thru 9 locks.
For a refresher, We did do 1 lock today between Albany & Waterford. It was Ashley & Dave’s 1st locking experience.

Shortly after getting checked in, we went for a walk to check out the town and searched for a place Barb had told us about – Don & Paul’s Coffee Shop, featuring 2 eggs & toast for $2 dollars.
I splurged and had 4 eggs & double toast for $4.00.
The entire bill for all 4 of us with drinks was $19.18, I picked up the check ! 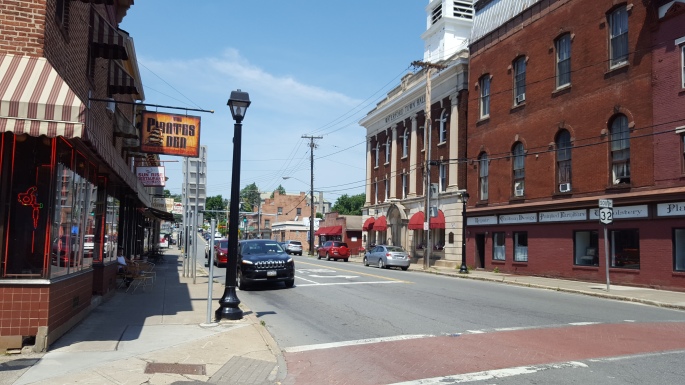 They even have a Laundromat where you can get ice cream at the same time you do your laundry !

After a quick stroll thru the small town, we walked over to the Hudson River, sat on the park bench for a while, then crossed the Broad Street Bridge to re-provision at the local grocery store. 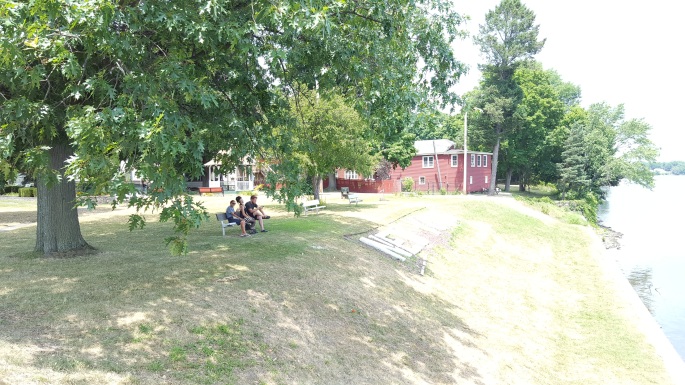 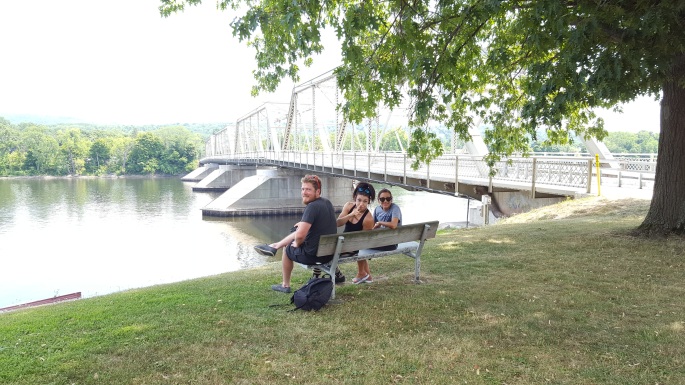 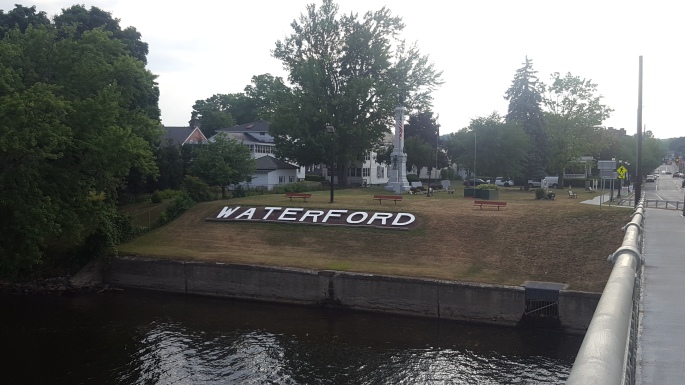 We took an Uber back from the grocery store, packed the supplies onto the boat, and then headed over to the Peebles Island State Park. I watched the boats for a while, and Ashley & Dave walked the perimeter trail of the park. 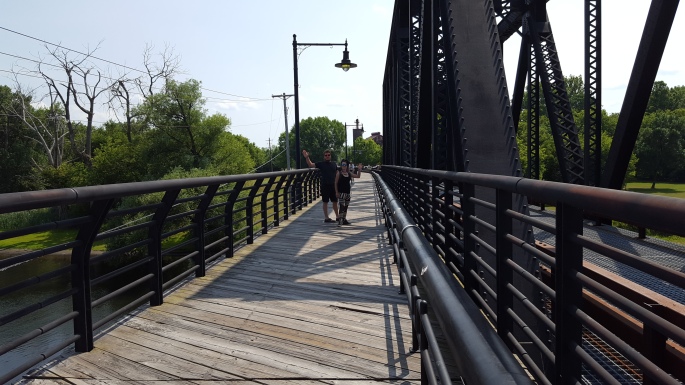 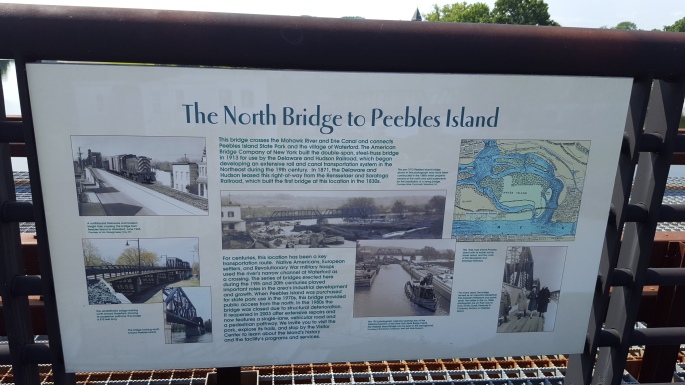 Later that night we went to dinner at McGreivey’s Fine Dining.
They had a white table cloth section & a bar section, both with the same menu.
We sat in the Bar Section and met nice servers Georgia & Jaime. 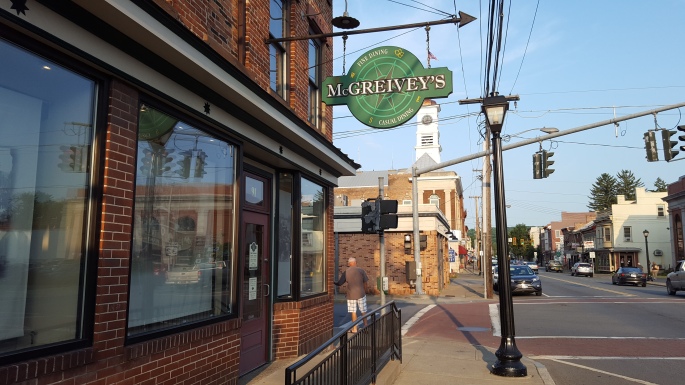 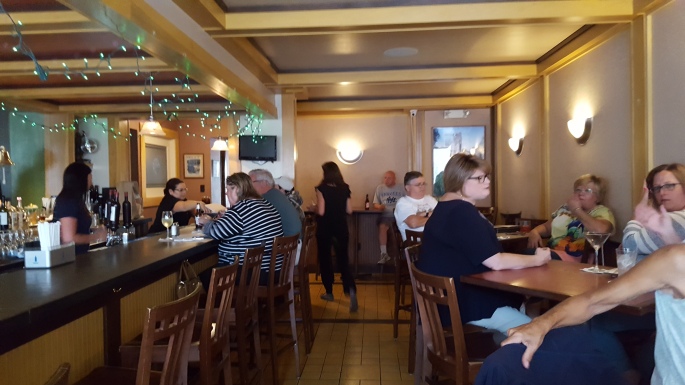 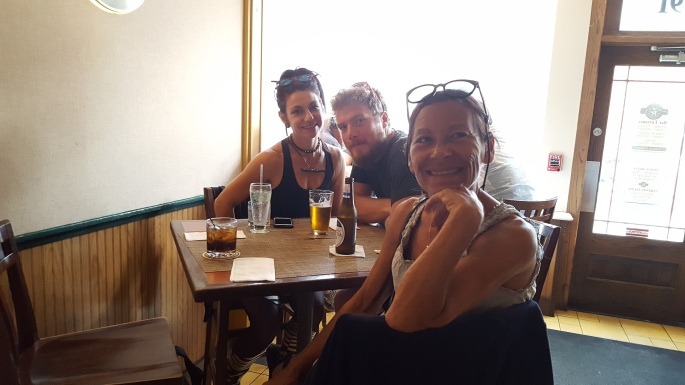 After dinner, we had a special treat at The Waterford Visitors Center.
It was Movie Night at The Visitors Center.
We watched a movie called The Bedford Incident starring Richard Widmark & Sidney Poitier.
It was a 50’s based story about a demanding ship captain (R. Widmark) and his chase of a Russian Submarine being covered by a magazine writer (S. Poitier).
There were about 12 of us who partook in the Bijou attraction. 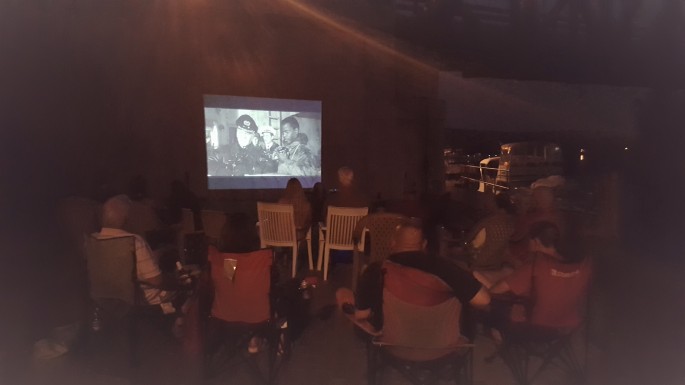 After breakfast, the girls washed some clothes at the laundromat that does not have Ice Cream.
Dave & I cleaned the Eisenglass.

After a little bit of work, we took a taxi to The Cohoes Falls View Park to see some highly rated water falls. The falls were very pretty, but a little disappointing because we could not get near them. 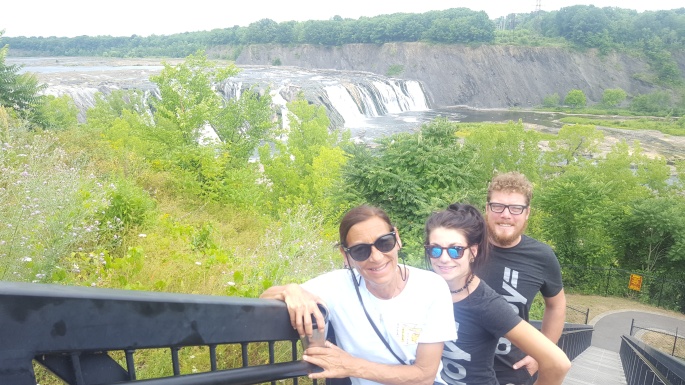 Like I said, all the “viewing stations” were all far from the falls. 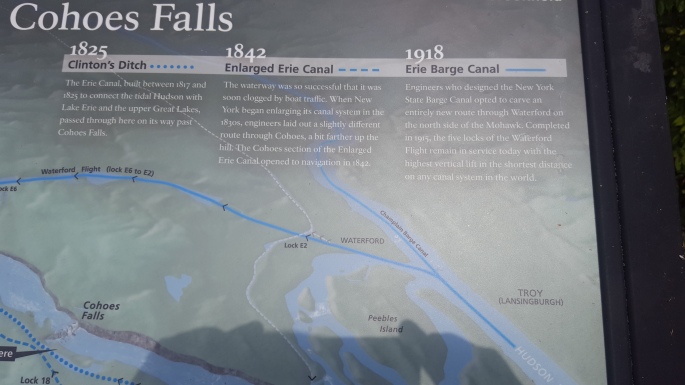 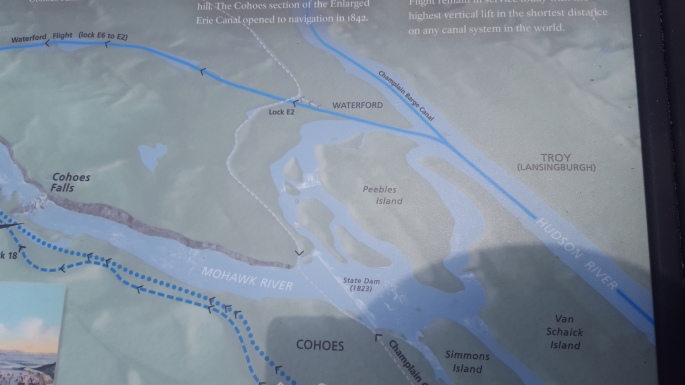 At this point we had seen most of the sites to see in the metropolis of Waterford New York, and nearby Cohoes Falls.
The afternoon was low-key, with; some book reading, some blogging, some googling, BBQing lunch on the aft deck, and playing some charades with Ashley & Dave.

About 6pm we went in search to replenish our stock of Vodka, there have been may Yeti Juices over the past few weeks (Vodka, Diet 7-up, and OJ). We walked about 1.5 miles to the Lighthouse Liquor Store. During checkout, the clerk & owner Brian said “you look like boaters”. We said “yep, we are” and discussed our journey from Michigan and Ashley/Dave’s 3rd visit from California.
A few minutes later, Liquor Store owner Brian offered to give us a ride back to the marina, how nice !

About 7pm we had Looper visitors for about an hour.
Vessels First Forty (Bill & Bobbie) & State of Mind (Jim & Andrea), came by for a few drinks.
We had originally met Bill & Bobbie in Chicago at DuSable Harbor, and we first met Jim & Andrea in Cape Canaveral. Interestingly enough, both boats are also from Michigan.
Oops – the team photographer was sleeping at the wheel, no photos !

It was an early lights out, we had pizza delivered about 9pm and were tucked in bed about 10:30pm.

Tomorrow will be a long day, we are heading for Amsterdam New York, only 37 miles away but with 9 locks. Each lock is estimated to take about 30 minutes to pass thru. So it will be an early 6am wake up and an attempt to be at the first lock (Erie lock #2) by the opening bell of 7am.

We will retire for the night thinking of our great friends Rick & Linda Spragg, who spent the month of February with us, traveling from Key West to Miami.
Linda’s mom passed away earlier this week and the funeral was today (Saturday, Jul-14).
Our hearts are with you guys, may your mom rest in peace.