Hey blog followers,
We have been out of communication for a few days.
Wednesday August 15th, we had a wonderful anchorage at a place called The Pool.
It was in a very remote location only about 10 miles north of Killarney, as the crow flies, but about 26 miles by boat.

We departed the beautiful Killarney Mountain Lodge about 9am on Wednesday.
We needed a pump-out prior to our planned overnight anchorage at The Pool.

After leaving our slip at 9am, we had to wait for 2 boats to leave the fuel dock (should have checked the fuel dock before we shoved off).
We were finally pumped out and on our way by 10am.

We had a short 26 mile ride from Killarney to Baie Fine & The Pool, but a lot of it was slow, so we did not arrive and get anchored until about 2pm.

Baie Fine is located just northeast of Frazier Bay, and is a very long narrow BAY which leads to the famous anchorage spot called The Pool. The shoreline is very hilly, rocky, and tree-lined.

After the long ride thru Baie Fine, we finally arrived at the narrow, shallow entrance to The Pool. I was nervous about the tight entrance, but as Doug Edgar & Darcy had advised, it was really no big deal. We did see the water depth get as skinny as 6 ft, but for a very short distance. I was actually able to coast in neutral past the 6 ft section.

After entering The Pool, we went down the long strait-away to the far end.
We rounded the corner to the very southeast end, in search of the primo anchorage spot we had dreamed about – anticipating our beautiful remote anchorage all to ourselves.

Oops, about 10 other boats had the same dream today !

But we did get a primo spot in the far back corner of The Pool, right next to the biggest section of boulders.

We had read and been tutored that it is common to tie off to the shore Mediterranean style, this affords more boat density in the anchorage, rather than every boat swinging a 360 degree radius.
We set the bow anchor with our windlass which works perfectly again after a little adjustment.
Then we used the dinghy to tie off the stern to some trees growing out of the rocky boulders on shore.
Check out our beautiful anchorage spot. 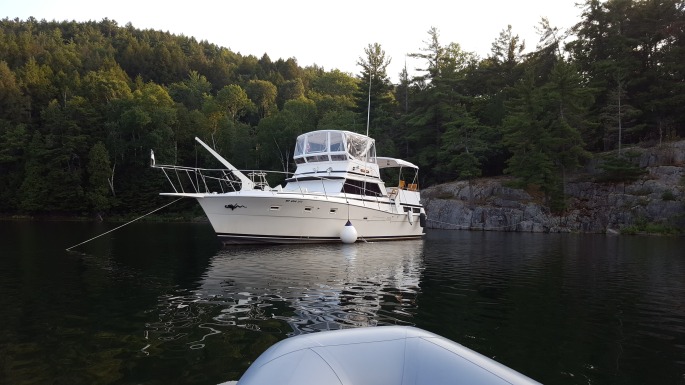 After a few “welcome to The Pool” beers, we headed out in the dinghy to the famed Topaz Lake.
Topaz Lake is sometimes referred to as “the lake on the mountain” and it is at a higher elevation than Georgian Bay. The deep lake is named for its crystal clear Topaz colored water. 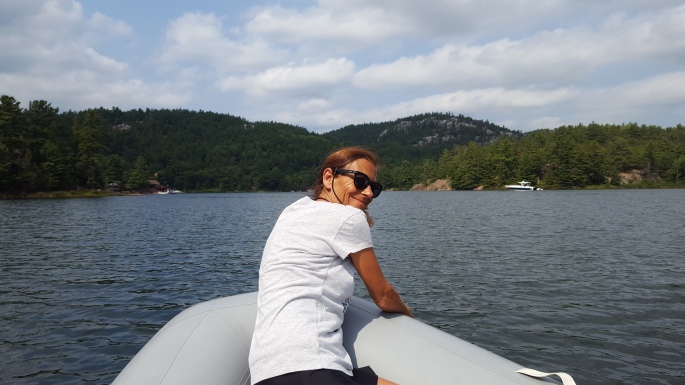 I’m pretty sure that prior to coming here, we had been advised that Topaz Lake was about a 20 minute hike from The Pool.

We walked & walked & walked – at this point we have been walking for about an hour.
No yellow markers, only blue.
The trail started out easy, but soon it was up/down steep hills with a shit-load of rocks.

But wait, Over the next ridge, I think I see a clearing, we are almost there.
Over the ridge we went , EUREKA – there it was.
A lousy, scummy, lillypad laced lake that did not look like the visions we had dreamed of.
I felt like Ralphie on Christmas Story when he finally got the decoder ring, only to find out the code said “drink more ovaltine”.
There were old broken down trucks, rusty trailers, and old derilac boats.
We had one disgusting beer and started heading back.
At this point it was about 4pm, and we were already quite tired. 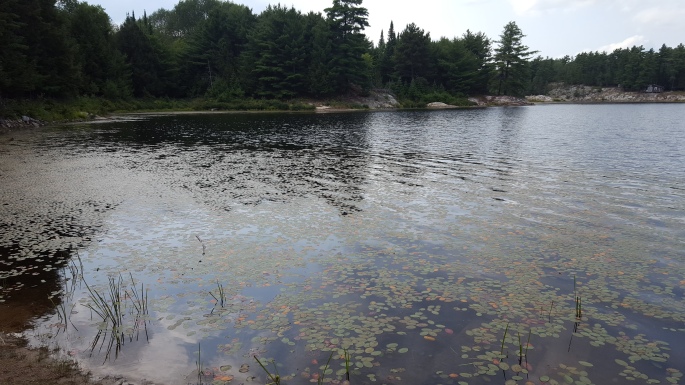 Along the walk back we passed 3 kids in a 4 wheeler and asked, “was the lake over this hill Topaz Lake? ”
They laughed and said, “no you need to go back to where the rocks stop at the top of the hill and follow the yellow marker to the right”.

We were both tired, but I dropped the small cooler & travel bag (swim suits, towels, binoculars, snorkel, etc) and told Nellie that I would go up the yellow path hill to see how much further it was to the lake. I said that I would go only 10-15 minutes and return (30 minutes round trip).

As I walked up the yellow trail hill, some folks were coming out, I asked “how much further to Topaz”
They said “5 minutes, it’s just over that hill, you’re almost there”.
So I went back and got Nellie.

The last 5 minutes were over a very rocky, boldery trail, but we finally made it.
Shan-Gra-La, there it was, joy to the world – Topaz Lake!
It was as many had described – very clear topaz colored water & surrounded by beautiful cliffs on a hilly tree-lined terrain. 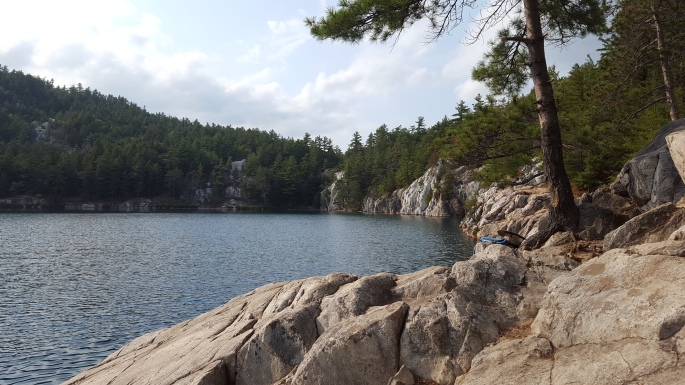 Since we may never make it back here, even though I was quite tired, I decided to take the plunge and go swimming.
I’m glad that I did, it was wonderfully refreshing.
I used my snorkel and a small rock to engrave “Murph” on the big boulder, just below the water surface. 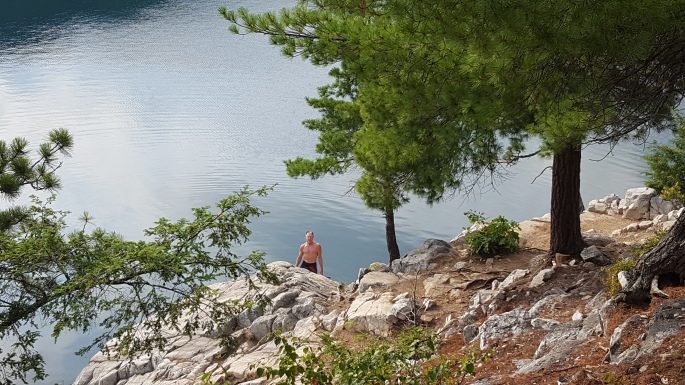 We headed back from Topaz Lake about 6:30pm, and arrived back at the boat about 7:15pm.

On the way back to the boat, we snapped some photos of the famed Evinrude Island Cottage. You may remember from the last post that the cottage was at the far end of The Pool. The cottage was built years ago by Ralph Evinrude, for his wife singer/actress Frances Langford.
The story goes that Ralph and Frances both enjoyed boating, had a 118’ yacht named Chanticleer, and during many summers brought Chanticleer to Baie Fine & The Pool.
I’m not sure how they got the 118ft yacht through the opening into The Pool, but I hear money fixes a lot of problems.

When we arrived back on the much smaller 43ft Gettin’ Looped, we ate grilled jambon & fromage sandwiches for dinner, enjoyed our beautiful anchorage, and pretended for a second that we were big shots like Ralph & Francis. 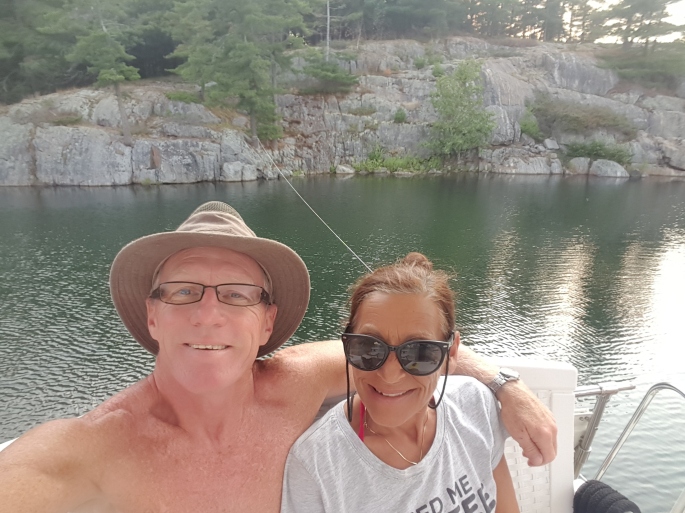 After the bugs came out, we retreated into the salon and watched one of Jonell’s favorite movies on DVD – The Shawshank Redemption.

Next Stop
Little Current Ontario, on the north side of Manitoulin Island.