Aug 12 – Sun
We started the day with a wonderful 52 mile ride from Tobermory to Killarney Ontario, over awesome smooth waters.

For those of you who did not see the last post, one of the places we wanted to see with Kenny & Carla was Flowerpot Island. We ran out of time, attempting to get them back to Tobermory by 11am, after anchoring the night before.
Shortly after leaving Tobermory on Sunday, Nellie & I made a pass by Flowerpot Island on the way to Killarney, and looked at the famous Tobermory “Flowerpot Rock Formations”. 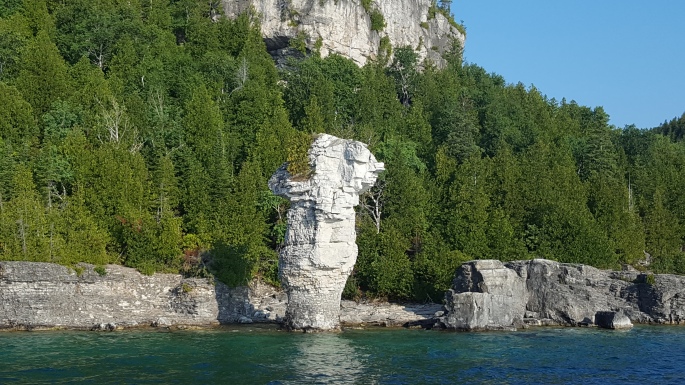 We arrived at The Killarney Mountain Lodge about 1:30pm.
OMG – this place is beautiful !
It sits on the Killarney Channel, just north of George Island.
The place sits on large mounds of boulders, and across the channel is some beautiful Red Rock, which lights up at sunset. 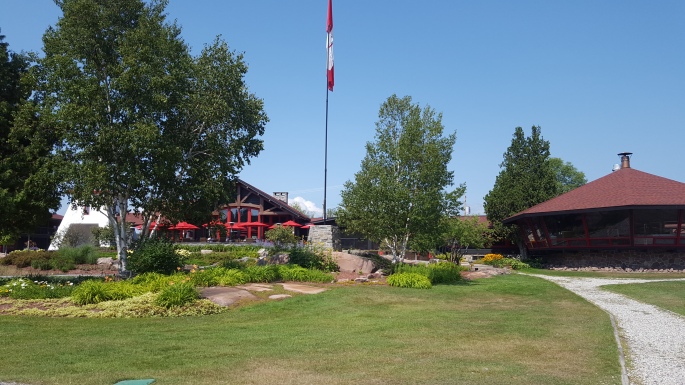 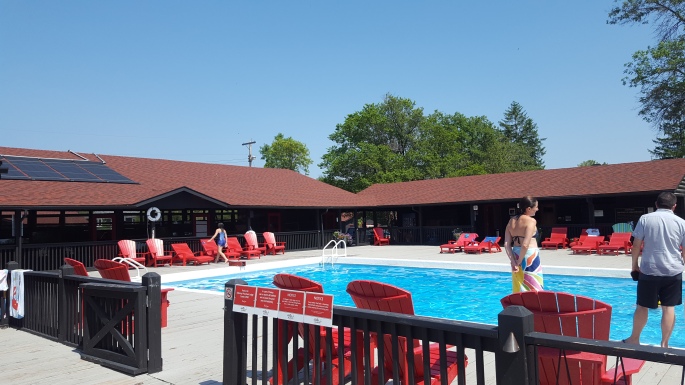 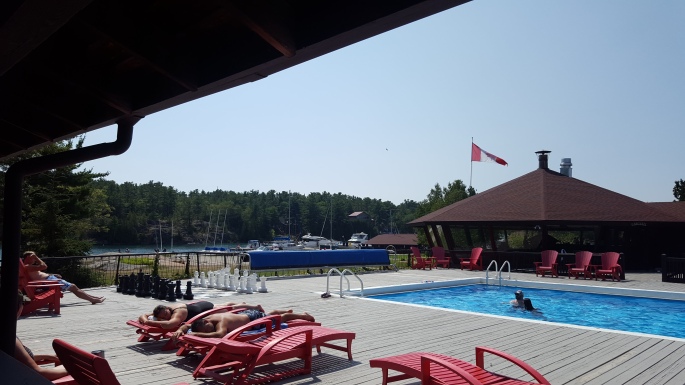 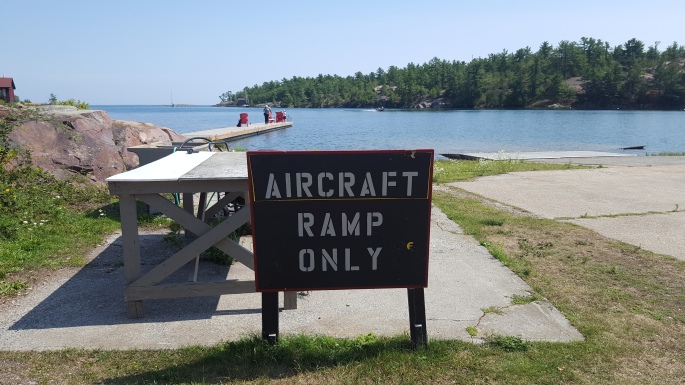 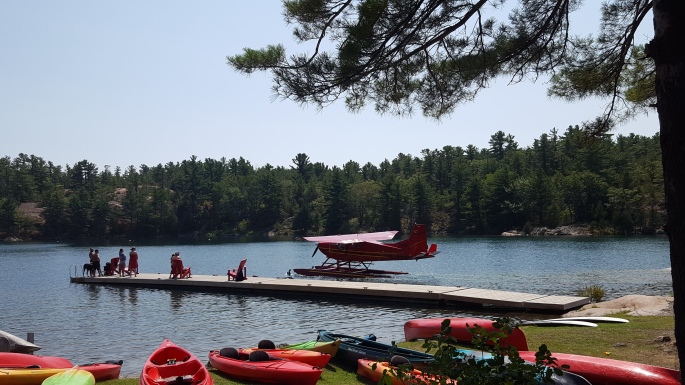 Shortly after arrival, we met our friends from the vessel Gypsea (Mike & Patsy) from Carefree Arizona.
We shared some drinks, and gave updates of where we had been & what we had seen, since we last interacted with them in Orillia. 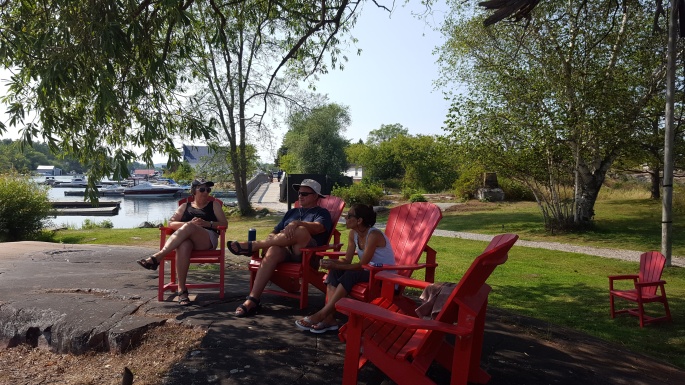 Later in the afternoon on the dock, I ran into fellow Loopers ; Mike (Gypsea), Mike (Endless Loop), and Mike (Mikie Like’s It).
Here is a shot of The 4 Mike’s on the dock at The Mountain Lodge.

After much jaw-boning on the dock or sittin’ in the Adirondack Chairs, we headed for a group dinner in the Mountain Lodge. 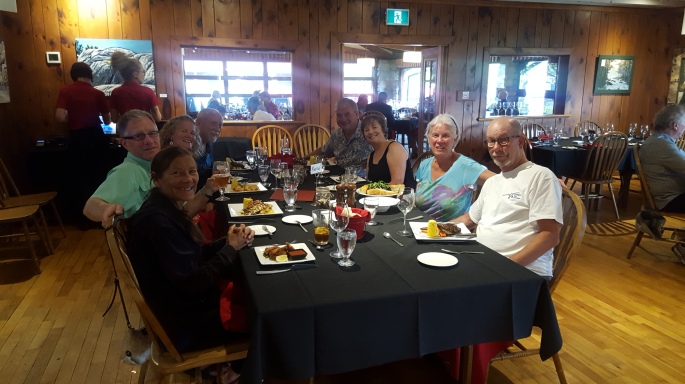 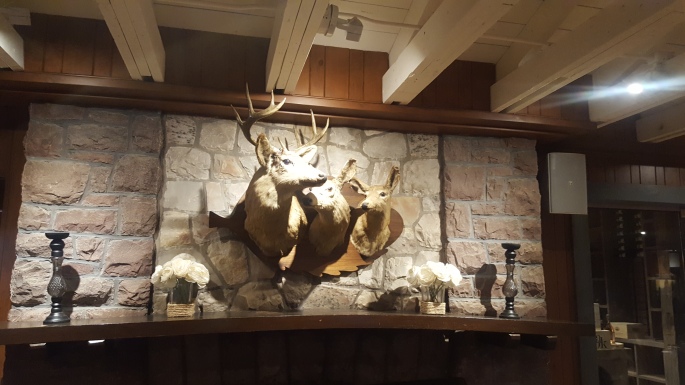 After dinner, on the way back to the boat, we saw a wonderfully vivid bright orange sunset. Once again, the camera does not show the true vivid orange color. 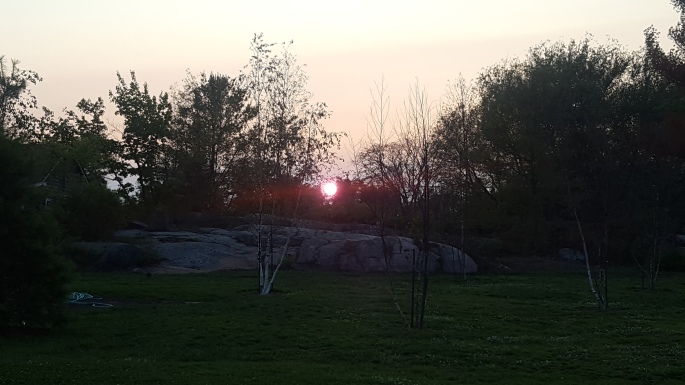 That’s all from Killarney for tonight.
We have 2 more days here in this paradise resort.

I spent Monday morning on some busy tasks ; reservations for Little Current later this week, getting Ashley an Airplane Ticket for Dan’s upcoming wedding, and doing some blogging.
Jonell did some laundry.

We both spent a good part of the day hanging around The Mountain Lodge Pool & just lazing around in the Red Chairs, watching the boats go up/down the Killarney Channel. 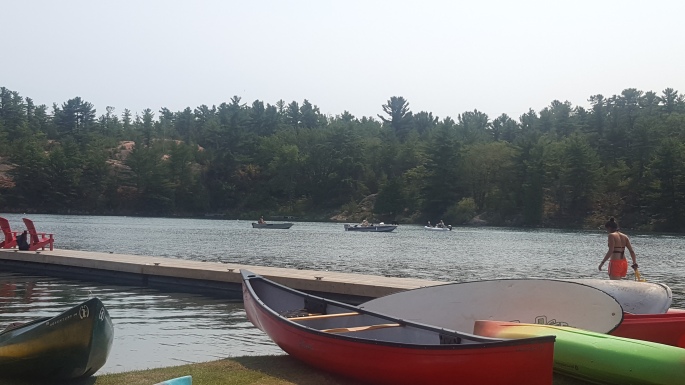 While sittin’ in the Red Chairs, we were treated to the arrival of a helicopter onto the Mountain Lodge grounds. I heard him coming before I saw him, started the video camera, and next thing I knew he landed right in front of where I was sitting.
Video Helicopter = https://youtu.be/X7rea7IViEI 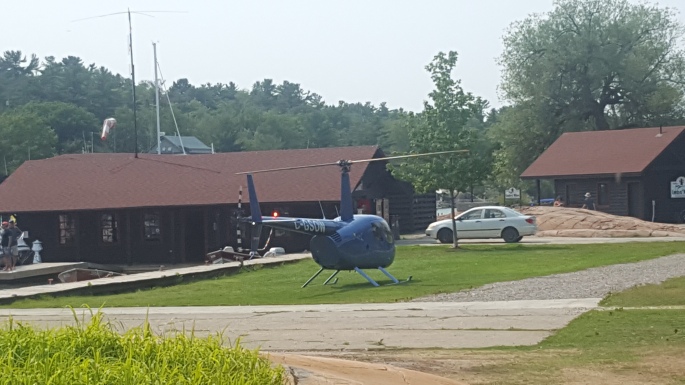 Later in the afternoon, I had some pre-dinner drinks with Mike from Gypsea, he is a really nice wonderful guy that I could talk to forever. We sat out on the boulders under the shade tree and talked for a couple of hours. 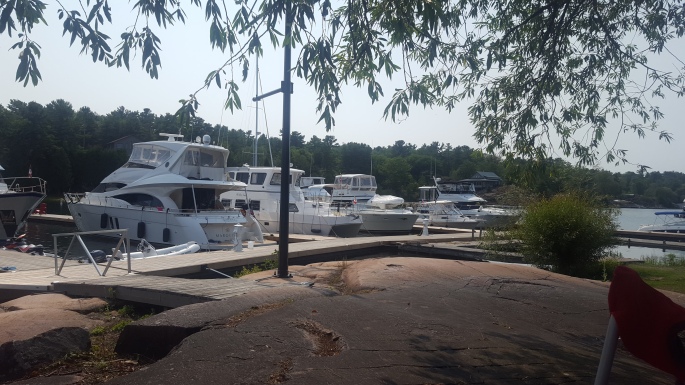 For dinner, the Looper gang of The 4 Mike’s and their brides went to the Killarney Herbert Fisheries for the World Famous Fish & Chips (it says so on their sign).
Herbert Fisheries has their own boat that works 7 days a week. Each day, whatever they catch is all that is sold on that day. You order only ” a big plate of fish or a small plate of fish”, no other choices.
You order your food at the counter, wait at the outside window, and eat your food at the nearby outdoor picnic tables.
Today’s fish was Pickerel.
I’m not sure about World Famous, but it was pretty good.
I was hoping for Perch. 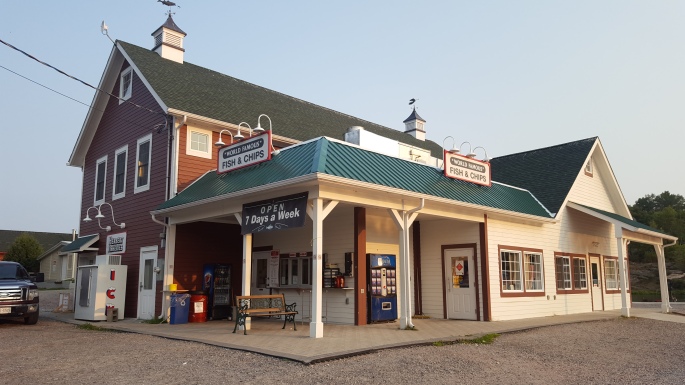 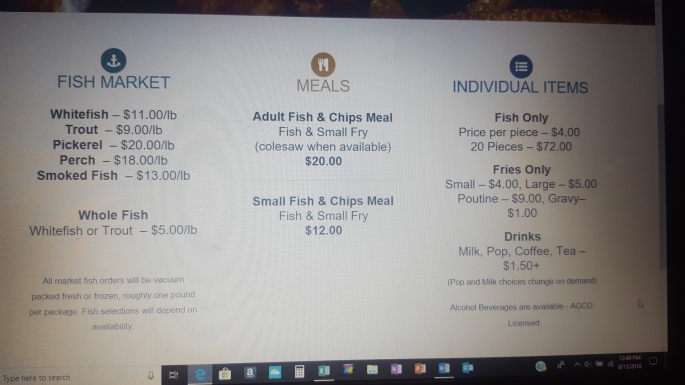 After dinner, the other 3 couples went to plan their route for Tuesday.
Nellie & I are staying an extra day at The Mountain Lodge, so we went & wandered down the road a piece to visit the other main resort in Killarney – The Sportsman’s Inn.
It was ok but not nearly as nice as the Mountain Lodge.
Note – both places are owned by the same people.
We had a drink on the balcony of the Sportsman’s Inn, and then headed back to Gettin’ Looped. 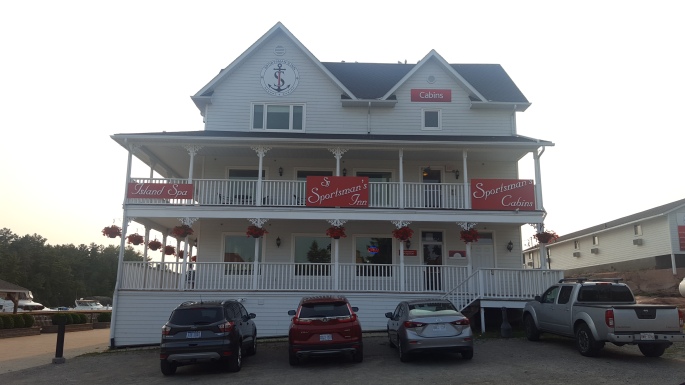 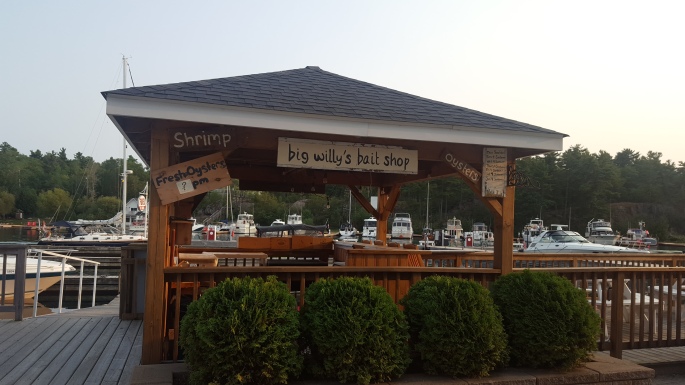 We got back to the boat just in time for another beautiful, bright orange sunset (does not show up in the photos). 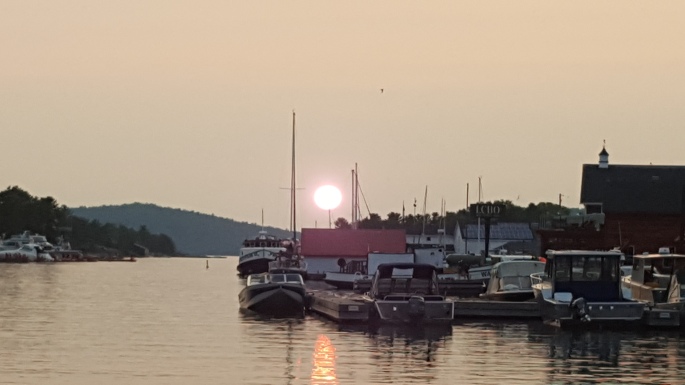 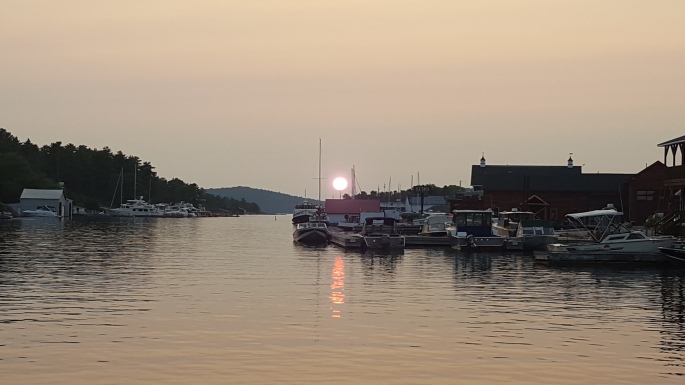 Aug 14 – Tue
Remember the comment from Monday – It was one of those lazy, rest-up days ?
Well Tuesday followed suit.
All of our Looper pals departed today, so me & Nellie spent the morning at the coffee shop, and almost the entire afternoon sitting out on the end of the dock watching & talking to boaters as they passed.

After the coffee shop, I did call one of our Georgian Bay advisors – Doug Edgar.
We spoke about our next stop at Baie Fine & The Pool.

After talking with Doug Edgar, we spent most of the late morning & afternoon sitting on the dock of the bay (Otis Redding) watching boats go by and exchanging hellos with the boat operators, paddle-boarders, and kayakers.

I am not so good at this low-key just sittin’ stuff, but the setting on the Killarney canal was wonderful, and I adapted quickly.

The photos don’t show it, but there was a lot of traffic, we probably saw over 50 boats during the 11am-3pm time frame. 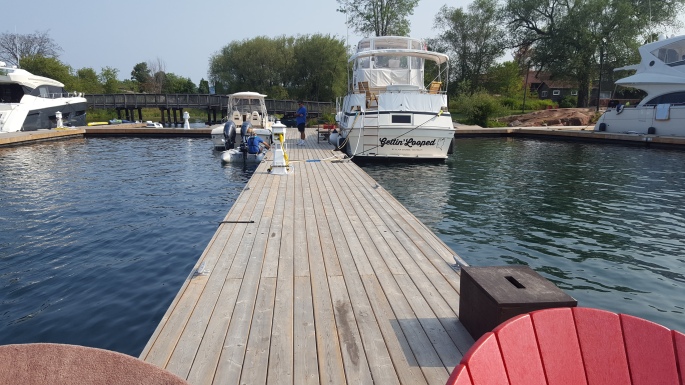 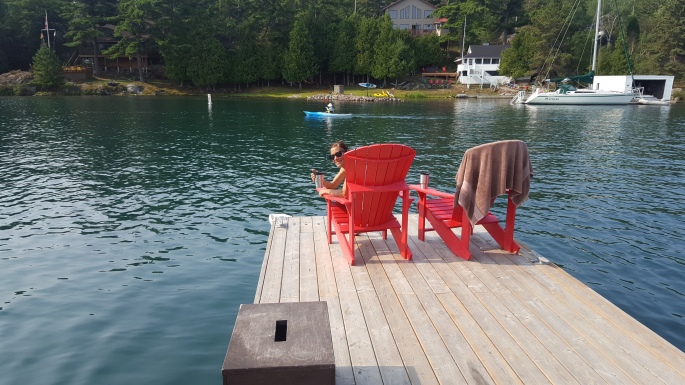 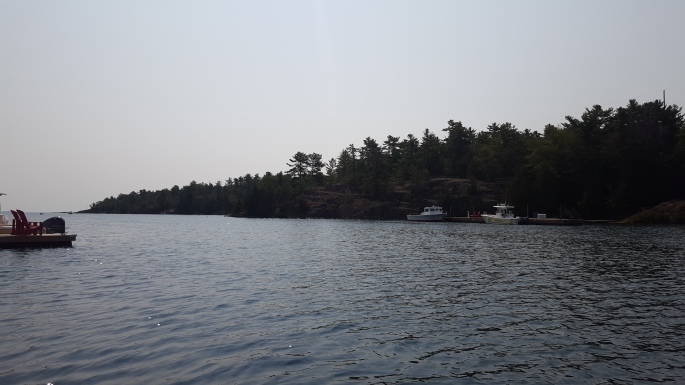 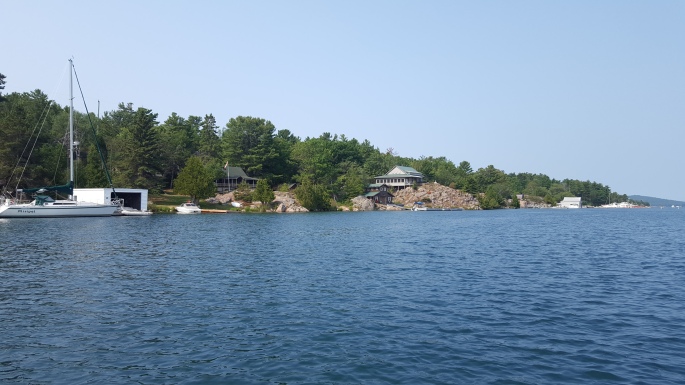 Across the canal we saw the cutest thing going on for over an hour.
There was a dog playing with his ball, all by himself.
The dog would – lay down, drop his ball at the top of the hill, watch it roll down to the bottom of the hill, and go fetch it out of the water.
He must have done this routine over 50 times while we watched. 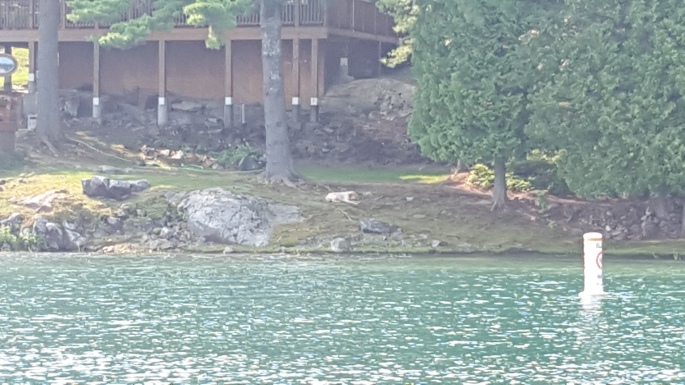 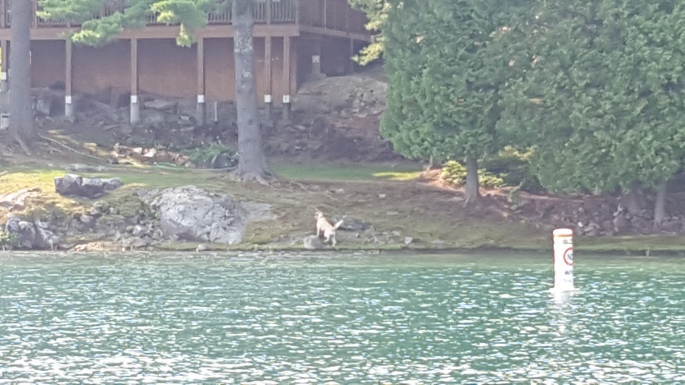 Later in the afternoon, we had 2 boats say “hey, we just saw you a few days ago in Tobermory”.
Evidently, they remembered the “Gettin’ Looped” boat name.
We spoke with each of them for a few minutes while they idled near the dock.
The 2nd boat had a guy named Darcy as captain.
He asked about our future travel plans, we advised about Baie Fine & The Pool.
Darcy said ” hey, I’ll come back later and give you my experience of the area”

The afternoon turned into early evening, and about 3pm the sun was getting pretty hot, so Nellie & I retreated to the shade trees up on the boulder rocks for a few hours between 3-5pm.

We went to dinner at the Lodge Restaurant, and as we were leaving I ran into Darcy, who we had just met a few hours earlier at the dock.
Darcy gave me some more pointers about Baie Fine & The Pool using our IPAD, but then the really interesting discussion began.

Darcy has lived in the Killarney area for his entire life.
He spent a lot of his younger years being the caretaker for the island house owned by singer/actress Francis Langford & famed boat motor manufacturer Ralph Evinrude.
The island house is actually in a body of water called The Pool.
We will actually see this place tomorrow when we go to The Pool.
The story goes that for many years Francis Langford & Ralph Evinrude used to cruise their 100′ yacht CHANTICLEER to Baie Fine & The Pool from Stuart, FL.

So it appears that the 43 foot SS Gettin’ Looped should be able to make it passed the narrow sections of Baie Fine & the entrance to The Pool.

Darcy told me of a story when he was about 15 years old, prepping the house for the arrival of Langford & Evinrude, and there was someone on the phone asking to speak with Francis. Darcy advised that she had not yet arrived & asked who was calling, the person on the phone said Bob Hope !

Darcy, his wife Heather, & family were a pleasure to speak with.
He is a really cool guy, but I did not get his last name. 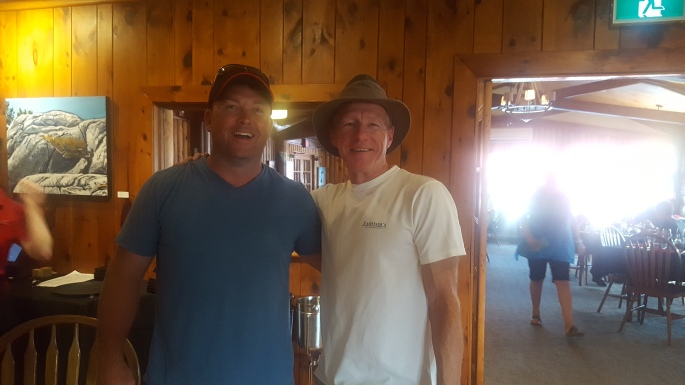 That was pretty much it for our last day in Killarney.

Next Stop
One night anchorage in The Pool, about a 20 mile ride from Killarney.

But Wait – Bonus Blog Material !
Remember the Big Chute Railway Lock just outside of Orillia ?
While we were at the Mountain Lodge we got some grainy but cool photos of the aft end of Gettin’ Looped, hanging out over the edge of the The Big Chute Railcar.
Gypsea had taken the photos, and we just now got them.

OMG – If I would have seen this when we were locking thru, I may have been more nervous. Good thing Nellie was up on the bow, if she was on the aft deck we may have toppled over !