It’s a boring post.
Skip it if you are busy, wait for the next one.

Jul 23 – Mon
After a nice 3 days at Alex’s on the Water in Oswego, we headed off into Lake Ontario and the city of Sackets Harbor New York, our last port in New York State & our last port in the USA for a few weeks.

Our goal was to check into Canada in Kingston Ontario because the Border/Customs Inspectors are well familiar with Loopers entering this city and the marina of Confederation Basin.
Sackets Harbor is about half way between Oswego & Kingston.

It was a somewhat sad ending to our time in New York.
NY was a great boating state.
We loved the excitement of New York City and the Hudson River.
We loved the beauty & tranquility of upstate New York on both the Hudson River & Erie Canal.
We had a great time with Adam & Patti, at Half Moon Bay.
We had a great time with Dave & Ashley, on the Erie Canal.

The 1st day on Lake Ontario was nice & calm, we only had about 40 miles to go from Oswego to Sackets Harbor, but rain was a chasin’ us, and we hit the throttle for a while.
We did 20mph for 1 hour and made it to Navy Point Marina at Sackets Harbor in 3 hours, try doing that in a Trawler !
And the other bonus was DEEP Water.
After being on edge in many areas of the ICW, it was nice to see Great Lake Depths again.
We saw depths in the 600-700 foot range.

We arrived at The Navy Point Marina in Sackets Harbor New York early about 11am.
We beat the rain by a few hours.

Once we got to Sackets Harbor, it was all work.
I was late on my 4th oil change, and wanted to get it done before entering Canada.
Sackets Harbor was the only port in the last 3 cities that I could find the oil we use.
I had called West Marine in advance to make sure they had stock.
So Mike changed the Oil.
Sackets Harbor Mechanics actually disposed of the used oil for me, nice folks here.
Nellie did Laundry.
Pretty boring day.

We went to dinner at a pretty nice place called Goodfellos (Luv that movie, actually spelled Goodfella’s).
Had a great salad, some great bread, and an awesome brick fired pie ! 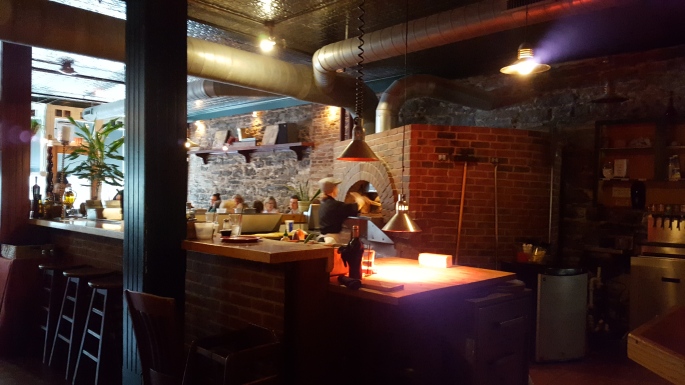 On the walk back, it looked like Sackets Harbor would have been a cool town with more history, but it was off to Kingston tomorrow.

As Porky Pig would say – “That’s All Folks”